The Centers for Disease Control and Prevention is finally catching up to the science.

For months, research about Covid-19 has pointed to two encouraging patterns. First, the underlying virus that causes Covid rarely spreads outdoors. Second — and even more important — fully vaccinated people are at virtually no risk of serious disease and only a minuscule risk of spreading the virus to others.

But the C.D.C., which has long been a cautious agency, has been unwilling to highlight these facts. It has instead focused on tiny risks — risks that are smaller than those from, say, taking a car trip. The C.D.C.’s intricate list of recommended Covid behavior has baffled many Americans and frightened others, making the guidance less helpful than it might have been.

Yesterday, the agency effectively acknowledged it had fallen behind the scientific evidence: Even though that evidence has not changed in months, the C.D.C. overhauled its guidelines. It said fully vaccinated people could stop wearing masks in most settings, including crowded indoor gatherings.

The change sends a message: Vaccination means the end of the Covid crisis, for individuals and ultimately for society.

If you’re vaccinated, you can safely get together with family and friends, mask-free. You can nuzzle your grandparents or your grandchildren. You can eat in restaurants, go to the movies and attend religious services. You can travel. If you’re vaccinated, Covid joins a long list of small risks that we have long accepted without upending our lives, like riding in a car, taking a swim or exposing ourselves to the common cold.

The announcement also sends a message to the unvaccinated (who, the C.D.C. emphasized, should continue wearing masks in most settings): Life is starting to return to normal, and a vaccine shot is your best protection against a deadly virus. It is also the best way to protect your community and the rest of the world. And the long vaccine waits and difficult sign-up procedures are disappearing in most places.

Some experts praised the announcement. “Good move for the C.D.C. and our country,” Dr. Howard Forman, a Yale School of Medicine professor and former Senate staff member, wrote on Twitter. “They must stop making perfect the enemy of very good. And this is a step in that direction.”

Dr. Uché Blackstock, the C.E.O. of Advancing Health Equity, wrote: “I’m ecstatic about this news! It’s evidence-based and it’s bold. I hope that the updated guidelines incentivize more people to get vaccinated.”

Other experts worried that encouraging vaccinated people not to wear masks might cause unvaccinated people to shed them too — the so-called slippery-slope argument. It is a common concern whenever health authorities lift behavior restrictions. But history suggests it is often overblown. An absolutist message often fails, Julia Marcus of Harvard Medical School has noted, especially when it urges people to take steps that do not actually protect them.

I spoke yesterday afternoon with Senator Susan Collins — the Maine Republican who criticized the C.D.C. during a hearing this week for not hewing to the data — and she argued that the change would lead to safer behavior. “This really matters because if people don’t have confidence in the C.D.C. guidance, if they believe it is driven more by politics than science, then they are likely to disregard the C.D.C. guidelines that we should be following,” Collins said. 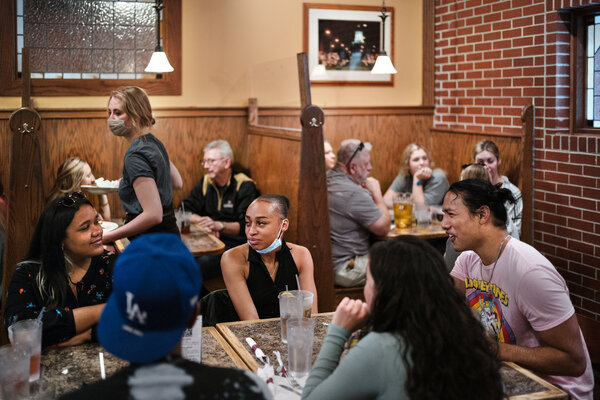 Not zero, but normalcy

In the months ahead, the Covid risks will not fall to zero, and it is important to remember that. But zero is not a realistic goal, and the freezing of normal life has brought big costs of its own: children who are not learning; parents who cannot return to the work force; businesses that cannot rehire their workers; and millions of people who miss everyday forms of human companionship.

When Covid was raging out of control, these costs were nonetheless smaller than the alternative. With vaccines widely available, that’s no longer the case.

The C.D.C. has not fully shed its caution. It has not withdrawn its exaggeration of outdoor risks for the unvaccinated. And yesterday’s guidance continues to direct vaccinated people to wear masks and remain physically distant in some circumstances.

Some of those exceptions — like nursing homes, hospitals, homeless shelters and prisons — probably make sense. Many people in these settings are vulnerable, and masks can continue to provide protection, from both small Covid risks and other contagious diseases.

The rationale for other exceptions — like airplanes and public transportation, as well as airports and other travel hubs — is less clear, and the C.D.C. did not offer a public explanation for why vaccinated people need a mask on a bus but not in a bar.

But given the unique role that travel has played in spreading the virus, a little extra caution is not beyond comprehension. It will not last forever, either. Yesterday’s about-face showed that while the C.D.C. may be slow, officials there take their mission seriously and do not enjoy being out of step with science.

“This is a watershed moment in the pandemic,” Dr. Lucy McBride, an internist, wrote on Twitter. “Next up: unmasking kids outdoors. Please, C.D.C.??”

“After a year of hard work and so much sacrifice, the rule is very simple: Get vaccinated, or wear a mask until you do,” President Biden said.

Biden and Republican senators meeting at the White House removed their masks. “Get vaccinated!” said Senator Joe Manchin of West Virginia, on a visit to his home state with Jill Biden. “We feel free.”

The C.D.C. offers only guidance; states set many Covid policies, and many are likely to change them in response.

Gov. Ron DeSantis of Florida said he would pardon Floridians who had violated mask or social distancing mandates.

Two studies have found that the Pfizer and Moderna vaccines protect pregnant women and do not damage the placenta.

A network of conservative activists mounted a campaign to discredit perceived enemies of Donald Trump inside the government, including F.B.I. employees and one of Trump’s national security advisers.

Missouri’s governor, a Republican, said he would not support an expansion of Medicaid that voters approved last year.

Representative Liz Cheney’s defiance of Trump isn’t popular in her home state of Wyoming. But some residents are sticking up for her.

“Let’s talk plain English here”: A behind-the-scenes look at how Biden runs his White House and how he spends his evenings.

Israeli ground forces carried out attacks on the Gaza Strip, escalating a conflict that Israel and Palestinian militants had been waging through the air. Follow the developments.

Before restarting its shuttered fuel line, Colonial Pipeline paid the hackers who infiltrated its system a ransom worth nearly $5 million.

Officials in Cameroon sentenced two transgender women to five years in prison on charges of “attempted homosexuality” and public indecency.

A Guantánamo Bay prisoner will give up the chance to question the C.I.A. in court about its torture program in a deal intended to lead to his release in the next few years.

Modern Love: A bear chased them. Then they chased the bear.

A Times Classic: How does family income predict children’s chances of going to college? Draw your guess.

Lives Lived: The chemist Spencer Silver set out to create an adhesive strong enough to be used in aircraft construction. He instead invented one that found use in a ubiquitous office product: the Post-it Note. Silver died at 80.

The making of ‘The Underground Railroad’

The director Barry Jenkins has crafted memorable portraits of tenderness in his films “Moonlight” and “If Beale Street Could Talk.” His new project diverges to more fraught territory — slavery, as depicted in Colson Whitehead’s Pulitzer Prize-winning 2016 novel, “The Underground Railroad.”

The series, which premieres today on Amazon, is “perhaps the most widely anticipated television series about slavery since ‘Roots’ debuted in 1977,” Reggie Ugwu writes in The Times. It follows a young enslaved woman who escapes through an actual underground railroad.

Jenkins said he was reluctant to make another movie about slavery’s brutal violence. Instead, Reggie writes, the focus is on “the psychic and emotional scourge, and the unfathomable spiritual strength required for any individual — let alone an entire people — to have come out alive.”

Make hummingbird cake, a tropical dessert with banana and pineapple.

A Year of Crafting

Paper mushrooms, lamps made of maple syrup cans, hand-embroidered lungs: Times readers sent in photos of the crafts they made this year.

The late-pandemic commute, a pitcher’s promise to his mother and more stories read aloud by the Times journalists who wrote them.

The hosts talked about going maskless.

What caused this week’s fuel shortage in the South? Take the weekly News Quiz and see how you compare with other Times readers.

The pangram from yesterday’s Spelling Bee was alchemy. Here is today’s puzzle — or you can play online.

Thanks for spending part of your morning with The Times. See you Monday. — David

“The Daily” is about Dogecoin. “Still Processing” is about the Derek Chauvin trial.