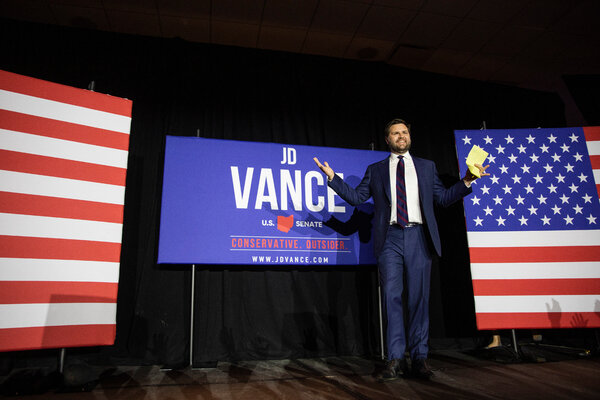 Most one-term presidents recede from the political scene, with their party’s voters happy to see them go. But Donald Trump continues to dominate the Republican Party a year and a half after he lost re-election.

Yesterday’s Republican Senate primary in Ohio confirmed Trump’s influence. J.D. Vance — the author of the 2016 book “Hillbilly Elegy” — won the nomination, with 32 percent of the vote in a primary that included four other major candidates.

Vance trailed in the polls only a few weeks ago, running an uneven campaign that suffered from his past negative comments about Trump. But after apologizing for them, Vance received Trump’s endorsement two and a half weeks ago. Vance quickly surged in the polls and will now face Representative Tim Ryan, a moderate Democrat, in the general election this fall.

Finishing second, with 24 percent of the vote, was Josh Mandel, a former state treasurer who has drifted toward the far right since Trump’s election. Matt Dolan, a member of a wealthy Ohio family and the least pro-Trump candidate in the race, finished third with 23 percent.

Vance’s victory continues his own shift toward a Trumpian far-right nationalism. After Vance’s book came out six years ago, detailing his family’s struggles in rural southern Ohio, he became a conservative intellectual whom liberals liked to cite. More recently, he has turned into a hard-edged conspiracist who claimed President Biden was flooding Ohio with illegal drugs — a blatantly false claim.

(This Times essay by Christopher Caldwell explains Vance’s rise in an evenhanded way.)

The winner of the Vance-Ryan contest will replace Rob Portman, a fairly traditional Republican, who served in both the George W. Bush and George H.W. Bush administrations. In the coming campaign, Ryan will likely emphasize Vance’s time as a Silicon Valley investor and celebrity author. (My colleague Jazmine Ulloa recently wrote about Ryan.)

Ohio is obviously only one state, and other primaries over the next few months will offer a fuller picture of Trump’s sway. More than two-thirds of Republican voters in Ohio yesterday did not back Vance, which suggests — as Blake Hounshell notes — an appetite among many Republicans to make their own decisions.

Still, Sarah Longwell, an anti-Trump Republican strategist, argues that endorsements understate his influence. “He has remade the Republican Party in his image, and many Republican voters now crave his particular brand of combative politics,” Longwell writes in The Times. Even Republican candidates whom Trump has not endorsed mention him frequently.

The rest of today’s newsletter looks at other results from last night and looks ahead to upcoming primaries.

Indiana also chose nominees last night. More than a dozen incumbent Republican state legislators faced challenges from candidates who were even more conservative on issues like abortion and gun rights.

But as of late last night, more than 10 of those Republican incumbents had won their races, with just one losing. Jennifer-Ruth Green, an Air Force veteran who attacked her top Republican opponent as a “Never Trump liberal,” did win her primary for a U.S. House district. Democrats have held the seat for nearly a century, but it could be competitive this fall.

Ohio and Indiana are both useful bellwethers for the Republican Party. Ohio used to be a national bellwether, voting for the winner of the presidential race between 1964 and 2016, but has shifted right recently. Indiana, which has fewer large cities, has leaned Republican since the Civil War.