In a unanimous ruling yesterday, the Supreme Court said that the N.C.A.A., which governs college sports, could not prohibit student-athletes from receiving modest, education-related payments.

The decision doesn’t mean that college football players can suddenly receive big salaries. But it is a milestone for those trying to change the model of college sports in the U.S., and it could open the door for broader challenges.

Alan Blinder, who covers college sports for The Times, helps us explain what yesterday’s ruling means, and what’s next for the N.C.A.A.

The N.C.A.A. says its athletes are amateurs. That may have been true decades ago, when competition was mostly limited to other schools in the area and less intense training schedules allowed students to balance their athletics with their schoolwork.

But it’s an increasingly hard argument to make, particularly for high-profile sports like football and basketball. Conferences sign lucrative TV deals; coaches earn millions of dollars; teams crisscross the country for games and can spend 50 hours a week training.

“The N.C.A.A., in a nonpandemic year, has more than a billion dollars flow through it. Even more money moves through the conferences and schools because it’s not just TV; it’s apparel and ticket sales and everything else,” Alan told me. “What you’ve seen over the years, as more and more money sloshes around, is that amateurism seemed less visible to a lot of casual fans.”

Those who oppose paying N.C.A.A. athletes say that the current compensation model, in which colleges cover the cost of attendance — including tuition, room and board, and some living expenses — is appropriate. They also say it preserves a line, however faint, between college sports and professional sports.

But others, including former athletes, say the model uses players’ skill and labor to generate huge revenues, and offers generous compensation to everyone except those playing the game. 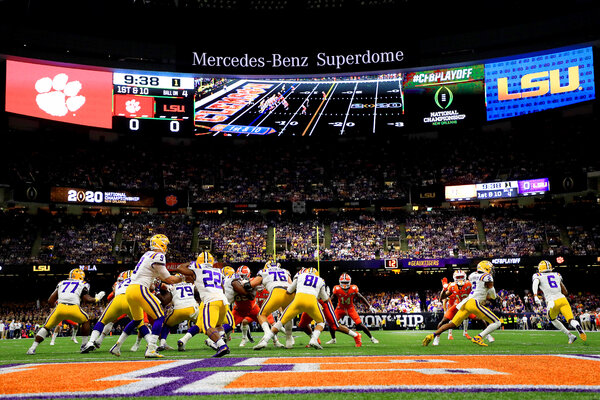 What the court ruling means

“The question before the court was a fairly narrow one, and the court responded with a narrow ruling,” Alan said. “But what they did was trim the N.C.A.A.’s sails. They said that their power was not absolute and unchallenged.”

That was most apparent in a concurring opinion by Justice Brett Kavanaugh, who signaled that the court might be interested in going further in a future N.C.A.A. case. “Nowhere else in America can businesses get away with agreeing not to pay their workers a fair market rate on the theory that their product is defined by not paying their workers a fair market rate,” Kavanaugh wrote.

More change around the corner

“To a certain extent, the Supreme Court ruling is a bit of a sideshow,” Alan told me. “The real change that’s going to affect most athletes playing now is coming a week from Thursday.”

That’s when at least six states — Alabama, Florida, Georgia, Mississippi, New Mexico and Texas — will enact laws allowing college athletes to profit from their names, images and likenesses. A player could, for example, sign an endorsement deal, sell autographs or host a training camp.

Some universities worry that the patchwork rules will create unfair advantages in recruiting high school players, and many have pushed for nationwide standards. The N.C.A.A. agreed to modernize its endorsement rules in 2019, but has not yet produced its own plan. The group’s president asked Congress to help by creating federal regulations, but that effort has also stalled.

Now, as Alan recently wrote, “the college sports industry is bracing for an era they expect will be marked by chaos and uncertainty.”

For more: Here’s Alan’s story on the Supreme Court ruling, and Billy Witz on the limits of the decision.

The Biden administration has yet to distribute 55 million vaccine doses it pledged to donate by the end of this month. Most will go to Covax, an international effort to vaccinate poorer nations.

Many people in the U.S. needed persuading to get vaccinated. Not in South Texas.

Why are the Tokyo Olympics happening? These numbers explain it.

The White House and Barack Obama backed Senator Joe Manchin’s changes to the Democrats’ voting-rights proposal. (The bill is headed for a roadblock in the Senate.)

Republicans have embraced a political realignment: domination in rural areas and limited influence in big cities. It comes with a cost.

A judge partly dismissed lawsuits over the clearing of protesters last year before a photo op for Donald Trump.

Iran’s ultraconservative president-elect, Ebrahim Raisi, said he would not meet with President Biden and called for the U.S. to stick to the 2015 nuclear deal.

Experts say that the use of Aduhelm, a newly approved Alzheimer’s drug, should be limited.

Carl Nassib of the Las Vegas Raiders became the first active N.F.L. player to publicly say he is gay. “I finally feel comfortable enough to get it off my chest,” he said.

“Like doing cartwheels on the edge of a cliff”: Parents of pandemic babies on giving birth in isolation, balancing child care with remote work and fending off vaccine-skeptical grandparents.

Leadership: Some Google executives are seeing cracks in their company’s success.

Victoria’s Secret: Why did we fall for the Angels?

Lives Lived: Robert Quackenbush was a prolific children’s book author. His characters included Henry the Duck, Detective Mole and Miss Mallard, a crime-solving duck who got her own television series. He died at 91.

‘The most R-rated G you will ever see’

In 1996, Disney released an animated film with a musical number about lust, sin and hellfire. The movie’s plot involves the threat of genocide against the Roma. Yet somehow, “The Hunchback of Notre Dame” earned a G rating from a review board of parents.

“That’s the most R-rated G you will ever see in your life,” Tab Murphy, one of the film’s screenwriters, told The Times. For the movie’s 25th anniversary, Sarah Bahr unpacked how Disney made such a dark children’s film.

The movie changed some things from its source material, a dreary 19th-century Victor Hugo novel. It added talking gargoyles, and the two main characters didn’t die at the end. Because Disney did not want to take on the church, Hugo’s troubled archdeacon, Claude Frollo, became an evil magistrate.

Still, Disney executives took a relatively hands-off approach. “They were like, ‘You write the story you want to tell, and let us worry about our brand,’” Murphy said. (The film’s marketing did tell a different story. Its tagline was “Join the party!”)

Some of the movie’s themes have stood the test of time. Frollo feels like a “very contemporary” villain in the #MeToo era, the film’s co-director noted. “Maybe, in retrospect, ‘Hunchback’ was a bridge too far,” Alan Menken, who composed the film’s score, said. “But God, am I glad they took that bridge too far.” — Sanam Yar, a Morning writer

Summer pasta is always a good idea. Make this one with zucchini and ricotta.

“In the Heights,” set in a neighborhood known as the Little Dominican Republic, didn’t cast dark-skinned Latinos in lead roles. It has raised discussions about colorism in Hollywood.

The pangram from yesterday’s Spelling Bee was awkwardly. Here is today’s puzzle — or you can play online.

Thanks for spending part of your morning with The Times. See you tomorrow.

P.S. We want to hear from you: What are your favorite spelling bee memories from childhood?

Today’s episode of “The Daily” is about the New York City’s mayor’s race. On “The Ezra Klein Show,” Sarah Schulman discusses AIDS activism. “Popcast” explores “In The Heights.”