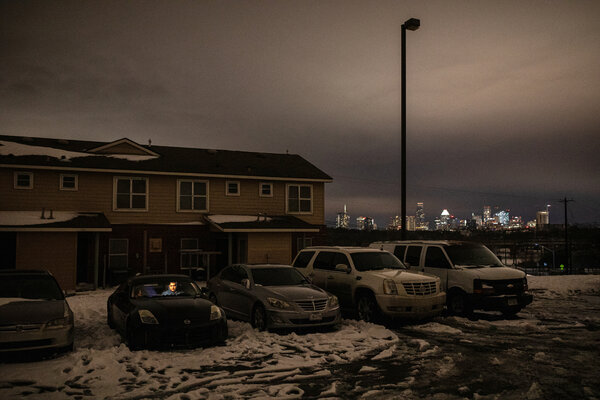 Much of the Pacific Northwest is blanketed in snow. Texas continues to endure frigid weather and electricity outages. Another winter storm is spreading across much of the country. Today, snow or freezing rain may fall on Washington, New York and Boston.

To make sense of this week’s cold spell and storms, I spoke with John Schwartz, a Times reporter who focuses on the climate. Our conversation follows.

Question: Let’s start with a simple question on some people’s minds — How do you think about record-low temperatures hammering parts of the U.S. at the same time that we’re experiencing global warming?

John Schwartz: It does sound counterintuitive! Those who deny climate science love to declare that there’s no such thing as climate change whenever the weather turns cold. But weather remains variable, and cold weather in winter still happens, even if the overall warming trend means that winters are getting milder.

Q: And is there any relationship between this week’s storms and climate change? I noticed that the climate scientist Katharine Hayhoe uses the phrase “global weirding.”

John: There’s interesting science that suggests the effects of a warming world have something to do with these sudden bursts of Arctic cold, as well. The cold air at the top of the world, the polar vortex, is usually held in place by the circulating jet stream. The Northern Hemisphere’s warming appears to be weakening the jet stream, and when sudden blasts of heat in the stratosphere punch into the vortex, that Arctic air can spill down into the middle latitudes.

Q: Are there any other changing patterns of winter weather that may be connected to climate change?

John: A warming atmosphere can hold more moisture, so when you do get storms you can expect to see heavier rain and snow. There’s also fascinating research that links a warming Arctic to increased frequency of the broad range of extreme winter weather in parts of the United States. It’s known as “warm-Arctic/cold-continents pattern,” a phenomenon that’s still being studied.

Q: What are the recent weather trends — during winter or not — where the evidence most strongly suggests climate change is playing a role?

John: In the United States, we’re seeing longer wildfire seasons because of hotter, drier conditions, and our hurricanes are becoming more destructive in several ways, including flooding and storm surge. It’s even worsening the misery of pollen season. We’ve always had floods, fires and storms, but climate change adds oomph to many weather events.

I realize I’m repeating myself here, but scientists are still hashing out all of this. While the science underlying the links between human emissions and climate change is rock solid, some of the particulars, such as whether climate change will cause us to see more frequent blasts from the polar vortex, are still being debated. And that’s as it should be.

For more: Bill Gates tells The Times that “‘Weather for Dummies’ is probably the best book written for a general audience” about the relationship between climate change and the weather.

Hundreds of thousands of Texans are still without power, with more frigid temperatures expected into the weekend.

The crisis is a warning: As climate change accelerates, extreme weather events will put many electrical grids at risk of failure.

Access to safe water is also a problem, with seven million people in Texas under a boil water advisory.

Life expectancy in the U.S. fell by a full year in early 2020, the largest drop since World War II and a sign of the pandemic’s toll.

Gov. Andrew Cuomo of New York is facing a federal inquiry over his administration’s handling of nursing homes during the pandemic. (Read more about the scandal here.)

Cuba says it has developed a Covid-19 vaccine and will soon begin mass production.

Activists are pushing to split immigration overhauls into different pieces, including one for Dreamers and others for farm workers and refugees. It’s a response to the failure of immigration legislation over the past two decades.

Mitch McConnell is facing rare internal criticism from some Senate Republicans over his harsh words about former President Donald Trump.

Pentagon officials will recommend two female generals for four-star commands, after delaying the promotions over fears that the Trump White House would object.

Rush Limbaugh died at 70. His scathing style made him a talk-radio star and helped mold conservative politics.

Armed men wearing military uniforms abducted at least 40 people, most of them students, from a boarding school in Nigeria.

Ford says it will phase out gasoline-powered vehicles in Europe by 2030.

NASA will attempt to land its Perseverance rover on Mars this afternoon, searching for fossils of ancient microbial life. Follow it here.

$12 Juice: How did an upscale grocery store in Los Angeles become the unofficial hangout for the young, beautiful and bored?

In Her Words: The Biden administration wants to put gender issues at the center of its policy decisions. Hillary Clinton has advice.

From Opinion: The real story of the 1863 “draft riots” and what we can learn from it.

How to listen to live* jazz now

Live jazz — in intimate clubs like the Blue Note in New York, the Green Mill in Chicago and Fritzel’s in New Orleans — has been one of the many casualties of the pandemic. Some clubs have closed permanently, while others are experimenting with outdoor events or hoping to welcome audiences later this year.

Until then, the closest thing to live jazz inside a club can be a recording of a performance with an audience. “In jazz, moment-to-moment exchange is the coin of the realm, so everybody who’s present when the music is being made has a role to play,” Giovanni Russonello, who covers jazz for The Times, told us. “That’s why the live album has such a long and important history in jazz, from the earliest days of the LP era through today.”

A good example is the new album “Let My People Go” by the duet of Archie Shepp — a saxophonist and 83-year-old protégé of John Coltrane — and Jason Moran — a pianist and so-called MacArthur genius. On the album, Shepp and Moran play standards by Coltrane, Duke Ellington and Thelonious Monk. “Much of it has a gritty, unvarnished quality, as if played in an out-of-the-way roadhouse,” Martin Johnson writes in The Wall Street Journal.

We asked Giovanni for some other live albums, and he recommended:

“Ella: The Lost Berlin Tapes,” based on a concert she gave two years after a famous 1960 appearance in the city.

“Axiom,” by the New Orleans trumpeter Christian Scott aTunde Adjuah, recorded at the Blue Note just before the lockdown.

“Happening: Live at the Village Vanguard,” by Gerald Clayton, a young star on the piano.

“Budapest Concert,” by the pianist Keith Jarrett, who suffered two strokes in 2018 and may not play live again.

Salmon and farro pair well with this refreshing salad of cucumbers and radicchio.

Today would have been Toni Morrison’s 90th birthday. If you’re looking to read her books, this guide can help you pick one.

In “Consent,” a memoir by Vanessa Springora, a middle-aged writer preys on a 13-year-old girl. It’s a “work of dazzling, highly controlled fury,” The Times critic Parul Sehgal writes.

Jimmy Kimmel and Trevor Noah both talked about Texas.

The pangram from yesterday’s Spelling Bee was validity. Here is today’s puzzle — or you can play online.

P.S. A hidden haiku from The Times’s coverage of the winter storm this week: “He is hunkering / down at home, where both power / and water are out.”

On today’s episode of “The Daily,” an extraordinary story from Rwanda. The latest “Popcast” remembers Sophie, the architect of hyperpop.