Good morning. Georgia voters will decide Senate control — and so much else — today. 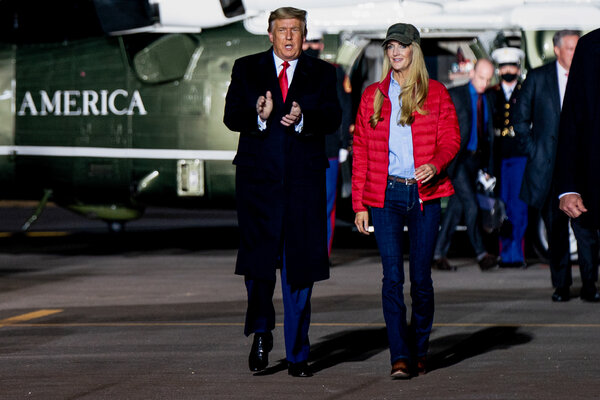 Will the United States spend tens of billions of dollars over the next few years to slow climate change?

Will Congress reduce medical costs for middle-class and poor families — and raise taxes on the rich?

Will Joe Biden be able to appoint the judges of his choice to the federal bench?

And will Biden be able to enact the coronavirus policies he favors?

These questions and many more are effectively on the ballot in Georgia today. The state is voting in runoff elections that will choose both of its senators, after no candidate won 50 percent of the vote in November. Republicans need to win only one of the two races to keep Senate control; Democrats need both to retake control.

Observers on the both the political right and left agree that the difference between those two scenarios is profound.

“The stakes could not be higher,” Barack Obama wrote on Twitter yesterday.

It will “echo far into the future,” The Wall Street Journal’s editorial board wrote, citing the possibility that Democratic wins would bring corporate tax increases and tougher regulation of Wall Street and the energy industry. If Republicans hold the Senate, they can block those moves, protect some of President Trump’s deregulation and investigate Hunter Biden, The Journal added.

It’s true that the filibuster — which requires 60 votes for many bills to pass the Senate, rather than a simple majority of 51 — will constrain Democrats even if they win both Georgia races.

But the filibuster no longer applies to judicial nominations, including to the Supreme Court. And it doesn’t apply to a small number of budget bills, known as “reconciliation” bills; a Democratic-controlled Senate would most likely pass many tax and spending measures — on climate, health care and more — through reconciliation.

Winning Senate control would also allow Chuck Schumer, the Democratic leader — rather than Mitch McConnell, the Republican leader — to decide which bills come up for a vote. By doing so, Schumer could help Biden build bipartisan majorities on a few issues. “The fate of President-elect Joe Biden’s legislative agenda hinges on the outcome” in Georgia, Vox’s Ella Nilsen wrote.

What do the polls say? After the polls’ flawed performance in November, many people are wary of trusting them, and I think some skepticism is warranted.

The latest: In Dalton, Ga., Trump turned a rally into a rambling lecture filled with conspiracy theories, falsehoods and personal attacks as he continued his fight against the peaceful transfer of power. “There’s no way we lost Georgia,” Trump said. “I’ve had two elections. I’ve won both of them. It’s amazing.”

And more from The Times: Nate Cohn points out that Democratic turnout has been strong in early voting. Jonathan Martin and Astead Herndon have previewed the two races. And The Times will publish election night needles for both runoffs.

“President Trump’s relentless effort to overturn the result of the election that he lost has become the most serious stress test of American democracy in generations,” Peter Baker, The Times’s chief White House correspondent, writes.

A top election official in Georgia refuted Trump’s claims of voter fraud in the state. “This is all easily, provably false,” he said, “yet the president persists.”

Congressional Republicans are divided over Trump’s attempts to overturn the election. The effort is almost certain to fail when Congress meets tomorrow to certify the result.

“The text of the Constitution is clear,” a group of conservative House members wrote, in a long statement criticizing the effort. “States select electors. Congress does not.”

England imposed another national lockdown until at least mid-February to contain a fast-spreading variant of the coronavirus.

New York City has administered only about a quarter of its vaccine supply, as virus deaths continue to rise. “We want those vaccines in people’s arms,” Gov. Andrew Cuomo said. “This is a very serious public health issue.”

A pharmacist who was arrested on charges that he intentionally sabotaged more than 500 vaccine doses in Wisconsin was “an admitted conspiracy theorist” who believed the vaccine could harm people, the police said.

The F.D.A. criticized an idea to stretch the limited number of Covid-19 vaccine doses, saying that a top vaccine official’s proposal for half-doses of the Moderna vaccine was “premature and not rooted solidly in the available science.”

The N.C.A.A. will hold its March Madness men’s basketball tournament entirely in Indiana this year. The group has not yet said whether it will allow fans in the stands. The 2021 women’s tournament will also be in one centralized region.

Iraq is facing its worst economic crisis in decades, driven by the pandemic, corruption and the low price of oil. The country is running out of money to pay its bills.

The police in Washington arrested Enrique Tarrio, the leader of the far-right group Proud Boys, on suspicion of burning a Black Lives Matter banner.

Slack restored its service after starting the first workday after a holiday weekend with an outage. The messaging platform, which has more than 10 million daily users, shut down for a few hours yesterday.

Car Wars: “It’s like the Hunger Games for parking.” Finding a spot in New York City was never easy. Since the pandemic, it has become nearly impossible.

From Opinion: Jamelle Bouie, Ross Douthat and Michelle Goldberg all have columns on Trump and American politics.

Lives Lived: Ted DeLaney began his career at Washington and Lee University as a custodian and accumulated enough credits to graduate at 41. He returned a decade later as a history professor and later helped lead a reckoning over the Confederate general the school’s name honors. DeLaney died at 77.

A January with less sugar

Many people try to improve their eating habits during the first days of a new year, either as part of a resolution or to recover from holiday gluttony. We have a simple suggestion for doing so: Cut back on the amount of added sugar you eat.

The average American eats about 17 teaspoons of added sugar per day, roughly twice the amount recommended for men and three times the recommended amount for women. As a result, sugar is a main cause of the country’s obesity epidemic and appears to raise the risk of diabetes, cancer and Alzheimer’s.

“Sugar turns on the aging programs in your body,” Dr. Robert Lustig of the University of California, San Francisco says. “The more sugar you eat, the faster you age.” (His lecture on the topic has more than 12 million views on YouTube.)

And here’s the thing: Cutting back on added sugar is not as difficult as many people fear.

My colleague Tara Parker-Pope has created a seven-day challenge that can help you do so. (It starts by cutting out breakfast sugar — and ends with a chocolate treat.) I’ve also written a guide to reducing sugar consumption and described my own experience of eliminating added sugar for one month.

If you discover even one or two lasting ways to cut back, you’ll be doing your body a favor.

Make a bright and comforting one pot curry full of yams, plantains and crispy shallots.

Peter Ho Davies’s novel, “A Lie Someone Told You About Yourself” tells a story of parenthood beyond the charming, photogenic parts. Read more about it here.

Cartagena is a Colombian port city so full of magic it has inspired books by Gabriel García Márquez. Here’s a guide to recreating some of its charm at home.

It’s going to be a big year in space and astronomy, with missions to Mars, the Moon and beyond. If you don’t want to miss any of them, you can sync your calendar with the solar system.

The late-night hosts are back from their holiday break.

The pangram from yesterday’s Spelling Bee was handicap. Today’s puzzle is above — or you can play online if you have a Games subscription.

P.S. An internal Times email yesterday reminded reporters not to use “strain” as a synonym for “variant.” A virus strain is less than 94 percent genetically identical to a known virus, as the email explained. The new coronavirus variant is more than 99.99 percent identical.

Today’s episode of “The Daily” is about the runoffs in Georgia. On the latest episode of “Sway,” Kara Swisher talks with Netflix’s Bela Bajaria about how change happens in Hollywood.

Claire Moses, Tom Wright-Piersanti and Sanam Yar contributed to The Morning. You can reach the team at [email protected].