For nearly 50 years, public opinion has had only a limited effect on abortion policy. The Roe v. Wade decision, which the Supreme Court issued in 1973, established a constitutional right to abortion in many situations and struck down restrictions in dozens of states.

But now that the court has agreed to hear a case that could lead to the overturning of Roe, voters and legislators may soon again be determining abortion laws, state by state. This morning’s newsletter offers a guide to public opinion on the subject.

Americans’ views on abortion are sufficiently complex that both sides in the debate are able to point to survey data that suggests majority opinion is on their side — and then to argue that the data friendly to their own side is the “right” data. These competing claims can be confusing. But when you dig into the data, you discover there are some clear patterns and objective truths.

Polls consistently show that a majority of Americans — 60 percent to 70 percent, in recent polls by both Gallup and Pew — say they do not want the Supreme Court to overturn Roe. Similarly, close to 60 percent of Americans say they favor abortion access in either all or most circumstances, according to Pew.

These are the numbers that abortion rights advocates often emphasize.

The most confounding aspect of public opinion is a contradiction between Americans’ views on Roe itself and their views on specific abortion policies: Even as most people say they support the ruling, most also say they favor restrictions that Roe does not permit.

One sign that many Americans favor significant restrictions is in the Gallup data. Gallup uses slightly different wording from Pew, creating an option that allows people to say that abortion should be legal “in only a few” circumstances. And that is the most popular answer — with 35 percent of respondents giving it (in addition to the 20 percent who say abortion should be illegal in all circumstances).

This helps explain why many abortion rights advocates are worried that the Supreme Court will gut Roe without officially overturning it. Yes, the justices are often influenced by public opinion.

Opinion on some major political issues has changed substantially over the last half-century. On taxes and regulation, people’s views have ebbed and flowed. On some cultural issues — like same-sex marriage and marijuana legalization — views have moved sharply in one direction.

But opinion on abortion has barely budged. Here is Gallup’s four-category breakdown, going back to 1994: 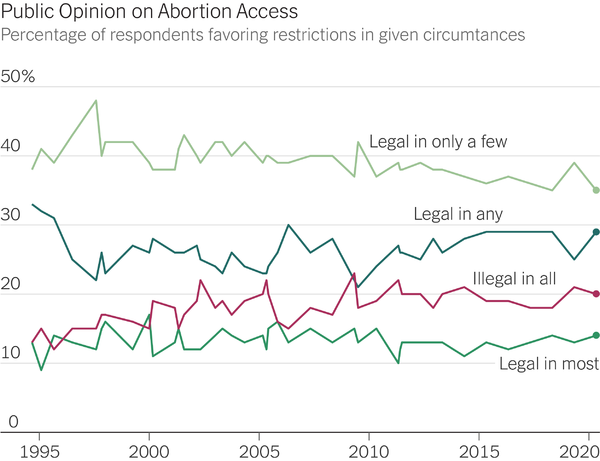 Other survey questions show a similar pattern, with the stability stretching back to the 1970s, just after the Roe ruling.

A key reason is that abortion opinion differs only modestly by age group. Americans under 30 support abortion rights more strongly than Americans over 50, but the gap is not huge. The age gaps on marijuana legalization, same-sex marriage and climate change are all larger.

Abortion remains a vexing issue for large numbers of Americans in every generation — which suggests the debate is not likely to be resolved anytime soon.

Gender plays a major role in American politics. Most women voted for Joe Biden, while most men voted for Donald Trump. On many issues, like gun control and the minimum wage, there is a large gender gap.

(One note: When people are asked whether they identify as “pro-choice” or “pro-life,” both the gender and age gaps grow. Those terms appear to prime people to think as Democrats or Republicans, rather than thinking through the details of their own policy views.)

One of the strongest predictors of a person’s view on abortion is educational attainment, as you can see in the chart above. Working-class Americans often favor restrictions. Many religiously observant people also favor restrictions.

It’s yet another way in which the Democratic coalition is becoming tilted toward college graduates and the Republican coalition is going in the other direction.

Both advocates and opponents of abortion access believe the issue is too important to be decided by public opinion. For advocates, women should have control over their bodies; after all, no major decision of men’s health is subject to a veto by politicians or other voters. And for opponents of abortion access, the life of an unborn child is too important to be subject to almost any other consideration.

If the Supreme Court overrules or substantially weakens Roe, this intense debate will play out state by state. Many states are likely to restrict abortion access substantially.

For more: Pew’s Jeff Diamant and Aleksandra Sandstrom look at opinion in each state. And The Upshot looks in detail at how and where laws may change if Roe falls.

New C.D.C. mask guidelines have Americans wondering whether they can trust one another.

Republican-controlled states are cutting off federal pandemic unemployment benefits, arguing that they are making it hard for businesses to hire.

An estimated 40 percent of doctors in India have gotten Covid, and more than 250 have died since early April.

Virus resources: How should you think about virus variants if you’re vaccinated?

“The future of the auto industry is electric,” President Biden said during a visit to a Ford plant in Michigan.

The House passed a bill to help law enforcement agencies review hate crimes against Asian-Americans, sending it to Biden.

Diplomatic efforts to end the violence are gaining urgency, with the E.U., the U.N., and others calling on the Israeli military and Hamas militants to lay down their weapons.

Israeli airstrikes have damaged Gaza’s health and sewage systems and displaced tens of thousands of people, deepening a humanitarian crisis.

Biden was said to have sharpened his tone with Prime Minister Benjamin Netanyahu of Israel in a private call.

Palestinians across the West Bank, Gaza and Israel went on strike.

Climate change is forcing the National Park Service to decide which species and landscapes to save — and which to let slip away.

A North Carolina prosecutor said sheriff’s deputies were “justified” in the killing of Andrew Brown Jr., a Black man.

In Japan, a woman who overstayed her visa got sick and died alone in detention, causing criticism of the country’s treatment of migrants.

Darwin’s Arch, a rock formation in the Galápagos Islands, collapsed because of natural erosion.

Why are people in your state not getting vaccinated?

“To me it represents everything that is beautiful and possible”: Dr. Adam Lee Goldstein writes about his hospital near Tel Aviv, where Jews and Muslims, side by side, treat the wounded.

Anonymous no more: In 1944, they were children on a train to a Nazi death camp. Researchers identified them, and they’re still alive.

A Times classic: Eight things worth your time.

Lives Lived: With deadpan comedy and Everyman good looks, Charles Grodin first drew notice on Broadway. He went on to star onscreen in “The Heartbreak Kid,” “Midnight Run” and “Beethoven.” He died at 86.

Nobody at DreamWorks, then a relatively new animation studio, expected “Shrek” to be a hit. “Getting sent to ‘Shrek’ felt like being sent to Siberia,” the director Vicky Jenson said.

Released 20 years ago, the movie was a departure from other animated features of the time. Its hero was a misanthropic ogre. The cheeky and crude humor made fun of fairy-tale tropes. And the film was loaded with pop culture references and contemporary songs.

Yet “Shrek” went on to spawn a billion-dollar franchise and win the first Academy Award for best animated feature. It “defined the kind of films the studio would go on to make: offbeat stories that, unlike Disney fairy tales, had more of an edge to them,” as Gina Cherelus writes in The Times.

Today, Shrek-related content is ubiquitous in memes and on social media, introducing the film to a new generation. At a sushi restaurant years ago, Jenson was delighted to overhear nearby diners talking about it. “One of them says, ‘Have you seen “Shrek”?’ And the other one is like, ‘No, no, I don’t go see kids’ stuff,’ and they go: ‘No, no, it’s not for kids. You have to go see it.’” — Sanam Yar, a Morning writer

The mainstream narrative is that Sinead O’Connor ripped up a photo of the pope on “Saturday Night Live” and derailed her music career. She’d like to set the record straight.

See a ghost town on a Norwegian archipelago in the High Arctic.

The hosts discussed the Giulianis.

The pangram from yesterday’s Spelling Bee was jocular. Here is today’s puzzle — or you can play online.

“The Daily” is about Gaza. On “The Argument,” a debate about critical race theory.

Lalena Fisher, Claire Moses, Ian Prasad Philbrick and Sanam Yar contributed to The Morning. You can reach the team at [email protected].