The latest conflict between Israelis and Palestinians had its own specific sparks. But just as important as those sparks is a larger reality: Both sides in the conflict are led by people who are relatively uninterested in compromise.

Many Israeli and Palestinian leaders have given up on the idea of lasting peace, such as a two-state solution in which Israel and a sovereign Palestine would coexist. They are instead pursuing versions of total victory. For Hamas, the militant group that rivals Fatah as the dominant Palestinian political party, that means the destruction of Israel. For Benjamin Netanyahu’s Israel, it means a two-class society in which Palestinians are crowded into shrinking geographic areas and lack many basic rights.

The result is the worst fighting since 2014.

“It would seem as if the current round of violence emerged out of a complex series of events in Jerusalem,” Vox’s Zack Beauchamp wrote. “But in reality, these events were merely triggers for escalations made almost inevitable by the way the major parties have chosen to approach the conflict.”

I recognize that some readers are deeply versed in the Israeli-Palestinian conflict, with strong views about it. And they may bristle at the above description as false equivalence. But I also know that most readers of this newsletter do not follow every turn in the Mideast and often find it bewildering. Today’s newsletter is mostly for them. It will lay out the basic arguments that the two sides are making. When you strip both down to their essence, they help to explain the situation.

One spark for the current fighting is an attempt by Jewish settlers to evict six Palestinian families from their East Jerusalem homes, where they have lived since the 1950s. The settlers have cited a 19th-century real-estate transaction to establish their ownership. Initial Israeli court rulings upheld the evictions, and the Supreme Court has yet to rule on the case.

It is just one example of how Israel has imposed control over places where Palestinians have lived for decades. As The Times’s Patrick Kingsley has written, “Israeli law allows Jews to reclaim ownership of land they vacated in 1948, but denies Palestinians the right to reclaim the properties they fled from in the same war.” Netanyahu and his allies believe that they can reduce the chances of a future Palestinian state by displacing Palestinians and expanding Jewish settlements. It’s a version of imperialism.

More broadly, the East Jerusalem case is an example of how Palestinians must endure frequent humiliation. They often cannot travel without enduring checkpoints and roadblocks. They can be denied Israeli citizenship. Their economy suffers from blockades. “The Israeli regime implements laws, practices and state violence designed to cement the supremacy of one group — Jews — over another — Palestinians,” B’Tselem, a human rights group, has written.

These inequities fuel Palestinian anger, which occasionally explodes. When it does, Israel’s military strength, financed partly by the U.S., allows it to inflict disproportionate damage. Over the past eight days, more than 200 Palestinians have died in the fighting, compared with at least 10 people in Israel.

Refaat Alareer, a professor in Gaza, has lost his brother, and his wife, Nusayba, has lost her grandfather, brother, sister and sister’s three children, all in Israeli attacks over recent years, as he explained in a Times Opinion piece. This toll, Alareer writes, makes him and his wife “a perfectly average Palestinian couple.”

Israel’s critics — including a growing number of American progressives — see it as using military force to perpetuate a brutally unjust society. The best hope for change, many Palestinians believe, is pressure from Israel’s most important ally, the United States. 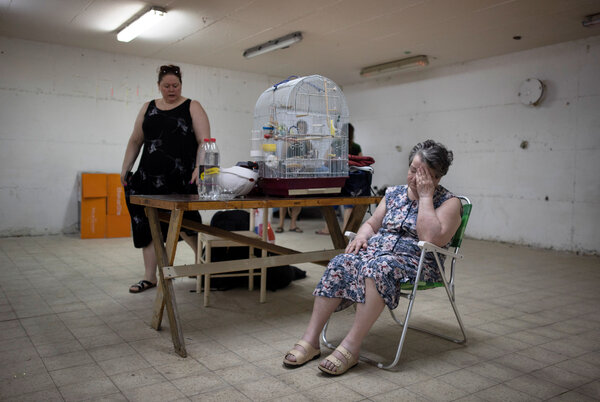 The current conflict did not escalate into something approaching war until shortly after 6 p.m. last Monday. That’s when Hamas launched missile attacks on Jerusalem’s civilians. Hamas, which is backed by Iran, has now fired at least 3,350 missiles toward Israel.

Many Israelis ask their critics: What would you do if a terrorist group (which Hamas is, according to the U.S. and European Union) committed to the elimination of your country fired missiles at it day after day, inducing widespread terror? “If it happened to Washington or to New York?” Netanyahu said on CBS this weekend. “You know damn well what you would do.”

Israel’s answer is both defense and offense. It has built a defense system known as Iron Dome, which has intercepted many missiles. And Israel has launched bombing attacks on the buildings and underground tunnels where Hamas stores its missiles. The point of the bombings is to degrade the Hamas threat.

Israel insists that it tries to minimize Palestinian civilian deaths, going so far as announcing some bombings in advance, even though Hamas fighters can then escape. But Israel says that Hamas deliberately stores missiles near civilians, knowing that the resulting casualties help it win global sympathy.

That tactic is consistent with decades of Palestinian political dysfunction. When the United Nations proposed a two-state solution in the 1940s, Arabs rejected it, David Harris recently wrote in The Times of Israel. When Arab countries controlled Palestinian territories in the 1950s and ’60s, they could have created a nation and did not. When Israel and President Bill Clinton offered a two-state peace deal two decades ago, the Palestinians said no.

Even many supporters of Israel who despair over Netanyahu’s leadership believe the larger problem is the Palestinians’ unwillingness to empower competent political leaders, rather than militants like Hamas. Israel can’t make a peace deal, its supporters say, until it has a partner more interested in building a prosperous society than trying to destroy Israel.

Before this conflict started, an optimist could imagine how the next few years might bring progress. Israel and four Arab nations recently established diplomatic relations, a breakthrough that could eventually offer a framework for resolving the Palestinian question.

But the new fighting seems to be squelching most optimism. Major street violence between Israel’s Arab and Jewish citizens has broken out for the first time in years. It remains unclear when the missile attacks and bombings will stop or if they will instead escalate into a ground war. It also remains unclear when either the Israelis or Palestinians will have political leaders whose priority is peace.

President Biden expressed support for a cease-fire during a call with Netanyahu yesterday. But growing international alarm has not caused either side to pull back.

In Times Opinion, Thomas Friedman writes that both Netanyahu and Hamas “have kept power by inspiring and riding waves of hostility to ‘the other.’” Michelle Goldberg and Bret Stephens also have columns.

New York City is planning to hold its marathon in November with 33,000 runners instead of 55,000.

Virus resources: How to travel while vaccinated.

The Supreme Court — with its newly conservative membership — agreed to hear a major abortion case. Some anti-abortion activists feel “a great sense of inspiration.”

A Times investigation reports that Apple has given in to escalating demands from the Chinese authorities.

WNYC fired the host Bob Garfield after two investigations found he had violated an anti-bullying policy. Garfield said he had yelled.

A recent episode of “The Argument” looks at the Supreme Court’s major options: overturning Roe v. Wade, undermining it or largely letting it stand.

Justice Brett Kavanaugh may be the swing vote. The Atlantic’s McKay Coppins profiled him.

Food fight: Some people call Alice Waters elitist. She says they just don’t get it.

A Times classic: OK, you fix the climate.

Lives Lived: As a top modeling agent in the 1960s and ’70s, Barbara Stone cultivated the careers of Cheryl Tiegs, Cybill Shepherd and even a young Martha Stewart. Stone died at 87.

What’s happening with AT&T and Discovery?

Three years ago, AT&T tried to become a major player in the entertainment industry by buying Time Warner. This week, AT&T walked away from the strategy.

It is instead spinning off the Warner properties, which include HBO and CNN, into a new company that is merging with Discovery Inc., which owns reality-based cable channels like HGTV and the Food Network. Nothing will change for consumers in the short term; the deal won’t close for another year, if regulators approve it.

Still, the news highlights how “traditional entertainment companies are struggling to keep viewers as the likes of Facebook, YouTube and TikTok draw big audiences,” Edmund Lee and John Koblin write in The Times. Bringing together two of the largest media companies “appears to be the quickest way to buy more eyeballs.”

Long term, consolidation often leads to higher prices for consumers. “It hints at a future with fewer, broader streaming options,” Jason Karaian, the editor of DealBook, said. Find more on what the deal means for your favorite shows.

Any type of dried noodles can work in this recipe for yo po mian, a staple from China’s central northwest.

The ’90s sitcom “The Nanny” is having a resurgence. Bask in “the glory of Fran Drescher’s wit and fashion sense,” Hilarie Ashton writes.

The pangram from yesterday’s Spelling Bee was bellyache. Here is today’s puzzle — or you can play online.

P.S. Abraham Lincoln became the Republican nominee for president 161 years ago today. “The youngster who, with ragged trousers, used barefoot to drive his father’s oxen and spend his days in splitting rails, has risen to high eminence,” The Times wrote.

Today’s episode of “The Daily” is about the U.S. economy. On “Popcast,” the rediscovery of Beverly Glenn-Copeland.