The U.S. accuses Facebook of being an illegal monopoly. And we explain how rapid-result Covid testing can save lives. 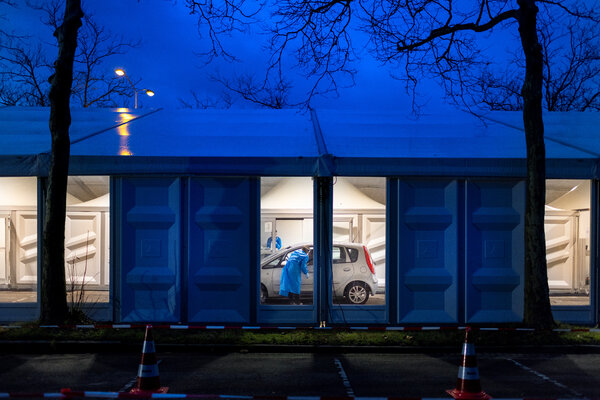 Reducing the spread of Covid-19 over the next several months — while vaccines are being distributed — has the potential to save more than 100,000 American lives, as I explained earlier this week. So how can we reduce the spread?

Some of the ways are well-known: consistent messages from national leaders; mask wearing; hand washing; and fewer indoor gatherings. But there is one other promising strategy, many experts believe:

Much more testing, especially tests that return results almost immediately, rather than a day or two later.

These tests, often known as antigen tests, could sharply cut the number of new infections by causing many more people who have the virus to enter quarantine. Germany and Italy have used antigen tests recently to reduce new cases. Several U.S. colleges have also used blanket testing — including slower-turnaround tests — to minimize outbreaks.

“There’s clear evidence that test-and-isolate works,” Paul Romer, a Nobel Prize-winning economist at N.Y.U., told me. As Jennifer Nuzzo, a Johns Hopkins epidemiologist, said, “It can make a big difference, provided it’s coupled with other things.”

To get a better sense of rapid testing, I went through it myself this week. I called several pharmacies and clinics in my areas until I found one offering a test to anybody who wanted one, and I drove there on Tuesday afternoon.

Within minutes of my walking in the door, a pharmacist — wearing a gown, gloves and face shield — was sticking a swab up each of my nostrils. It was unpleasant but not horrible. An hour later he texted me, “Test was negative,” along with a photo of a hand-held device whose screen showed “CoV2: -”

Imagine if all Americans could take multiple tests every month — including right before any risky behavior, like flying or seeing relatives. And imagine the tests were free, rather than the $100-plus I paid. A program of mass testing “can enable the United States to begin to achieve normalcy within weeks,” Michael Mina, a Harvard epidemiologist who is pushing for more testing, has written.

It’s important to note that these antigen tests are imperfect. Even after a negative test, people need to remain careful. Yet tests don’t need to be perfect to reverse the virus’s recent growth — and save thousands of lives. The key, Mina told me, is reducing the average number of new infections caused by each person with the virus to fewer than 1.0, from roughly 1.3 now.

Why isn’t the U.S. doing more testing? There are a few reasons.

The F.D.A. has been slow to grant approval for new tests. The Trump administration has been slow to spend the money that Congress has allocated for testing. And Congress may need to allocate more money; mass testing could cost a few billion dollars a month — still a small fraction of the cost of recent proposed virus bills.

To go into more depth on Covid testing, I recommend this new Times guide. “Ideally, you should be able to get a coronavirus test whenever you want it,” Tara Parker-Pope and Katherine J. Wu write.

“Facebook has used its dominance and monopoly power to crush smaller rivals and snuff out competition, all at the expense of everyday users,” Attorney General Letitia James of New York said. Facebook responded that federal regulators had cleared these acquisitions years ago.

The lawsuits are the latest sign that regulators are becoming more aggressive about fighting corporate concentration, after decades of largely accepting it. The Justice Department recently sued Google, accusing it of having an illegal monopoly on web search.

Canada approved Pfizer’s vaccine and could begin administering shots next week. The F.D.A. has not yet approved use in the U.S.

Two British people with existing allergies apparently had reactions to the Pfizer vaccine. Officials asked others prone to severe allergic reactions to delay getting the vaccine until researchers had learned more.

The pandemic has kept a generation of toddlers isolated from one another, leading parents to worry about their social development. But childhood experts say that kids that age are resilient and that most would be just fine.

President-elect Joe Biden urged Congress to approve a waiver allowing Gen. Lloyd Austin to serve as secretary of defense. Austin needs a waiver because he retired from the Army less than seven years ago, a rule meant to ensure civilian control of the military.

Hunter Biden — Joe Biden’s son and a frequent target of criticism from President Trump — said federal prosecutors were investigating his taxes. Hunter Biden said he had handled his finances “legally and appropriately.”

Officials in Cobb County, Ga., will open two more early voting locations — and seven in all, down from 11 last month — for the upcoming Senate runoff. Voting rights groups had criticized the earlier plan.

The world is dangerously behind schedule in slowing climate change, a United Nations report warned. But there is good news: Recent pledges to cut emissions by China and others could help avert the worst consequences.

New York State’s pension fund will drop many of its fossil fuel stocks, saying they are a bad long-term investment. The fund is one of the world’s largest investors.

Tens of thousands of Tigrayans, an ethnic group in northern Ethiopia, have fled the country after the prime minister declared war on their region.

An increase in backyard gardening, spurred on by the pandemic, led to thousands of archaeological finds, the British Museum said. Among them were coins from King Henry VIII’s reign in the 16th century.

Wildfires’ Toll: California’s trees — sequoias, redwoods, Joshua trees — are among the world’s oldest living things. And they’re in an existential battle against wildfires, as this multimedia story explains.

Lives Lived: In glowing colors, Helen LaFrance painted scenes from her childhood in rural Kentucky: church picnics, river baptisms and kitchens with jars of preserves shining like stained-glass windows. She once called painting “a way of reliving it all again.” LaFrance died at 101.

At least 82 new movies about the holidays are coming out this year, continuing a recent boom in Christmas films.

Why is it happening? Because people watch them. “No matter what the state of the economy, no matter what the state of chaos or stability, there is an extraordinary appetite for simple, cheesy, unsophisticated, easy-to-watch programming,” one expert told The Times last year. Hulu’s entry into the holiday genre this year, “Happiest Season,” broke premiere records on the platform, Variety reported.

The movies are also lucrative to advertisers because they attract women between 18 and 54 years old, a group that tends to have purchasing power. The Hallmark Channel was the most-watched cable network among that demographic for the entire fourth quarter two years ago.

If the films seem formulaic, that’s by design. “After spending two hours with us, you’ll feel a little bit better about yourself and about the world,” Michelle Vicary, a Hallmark executive, told The Los Angeles Times.

Our colleague Alexandra McGuffie analyzed this year’s releases and found several trends: Many protagonists are writers, journalists, teachers or musicians, and the movies’ titles often showcase a plot point. One example is “Feliz NaviDAD,” which focuses on a single father who finds romance with — who else — a musician.

For more: The Times rounded up the best holiday movies on Netflix.

Hanukkah begins tonight, and this recipe for potato latkes is a must-try even for people not observing the holiday.

It’s hard to grasp tone on the internet. Now, young people are leading a growing effort to clear things up in text-only environments: Tone indicators.

for the love of fleece

Have any old Patagonia fleeces lying around? They may be worth something in a booming resale market, The Wall Street Journal reports.

The late-night hosts had fun with the Supreme Court’s brief response to the Pennsylvania election challenge.

The pangram from yesterday’s Spelling Bee was cruciform. Today’s puzzle is above — or you can play online if you have a Games subscription.

Here’s today’s Mini Crossword, and a clue: Move like a dreidel (4 letters).

P.S. The word “sewist” — an increasingly popular gender-neutral term for people who sew — appeared for the first time in The Times yesterday, as noted by the Twitter bot @NYT_first_said.

Today’s episode of “The Daily” is about the vaccines and the Trump administration. On the latest Modern Love podcast, strangers help two women survive difficult times.