I have a pastime, one that used to give me considerable pleasure, but lately it has morphed into a source of anxiety, even horror: earth-watching.

The earth from space is an incomparably lovely sight. I mean the whole planet, pole to pole, waxing and waning and rotating in that time-generating way it has, and not the views from the International Space Station, which is in a low orbit about 200 miles up and gives us only part of the whole.

My earth-watching, made possible by NOAA and Colorado State University websites, originates in three geostationary weather satellites parked in exceedingly high orbits above the Equator. Despite their seemingly static positions, GOES-16 and 17, two American satellites, and Himawari-8, a Japanese one, are actually whizzing through space at 6,876 miles per hour. They do so to remain suspended imperturbably over the Ecuadorean-Colombian border, the Eastern Pacific and the Western Pacific respectively. At 22,236 miles above sea level, they are in effect falling around earth at the exact pace it turns. 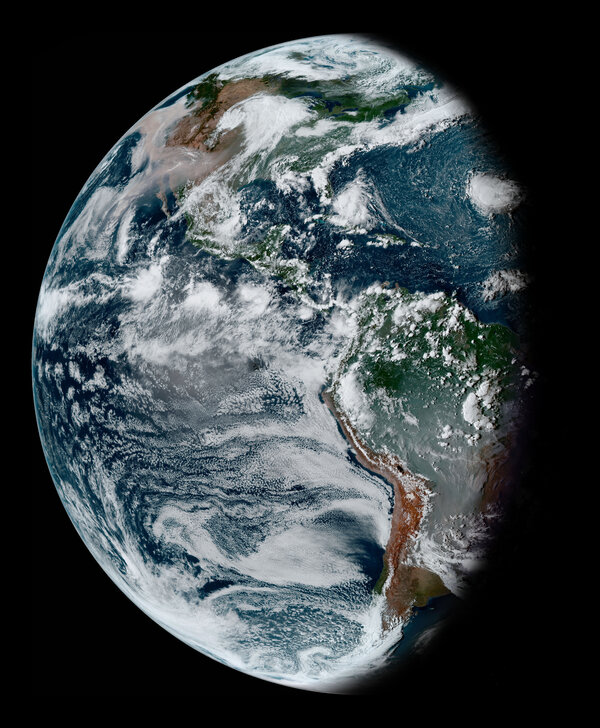 The views they provide are astonishing. The planet shines spectacularly in steady sunlight. It’s white and blue, green, ocher and tan, with complex coruscating swirls of cloud. An exquisitely thin aquamarine line defines its dayside limb, delineating its atmospheric perimeter and shading gradually to black at the migratory border between day and night. There’s something sacred to this sight. As the source of all life, as the birthplace of our species, it deserves veneration. It follows that any harm done to it — and we’re doing plenty — is a desecration.

It’s also a stage, the only one we’ve ever known. All the individuals who’ve strutted and fretted here for millenniums, or for that matter fled and trembled, producing what we call history, are merely players. But even by the standards of that problematic legacy, this latest period seems different. It’s more worrisome, more global, and with increasing frequency, more terrifying.

Last winter, for example, Australia experienced one of the worst brushfire seasons in its history. On the first Sunday of 2020 I decided to take a look. Himawari-8 revealed a vista as spectacular as it was unnerving. A giant furnace door had seemingly been pried open. A plume of smoke extended outward from the continent’s southeastern quarter, a region twice the size of Texas where flame vortexes had been spiraling 200 feet into the air. Carrying the color of the land it came from, that noxious exhalation bore the residue of a billion or more incinerated animals and innumerable plants, baked into tinder from decades of ever-hotter summers.

As the week unfolded, I watched that plume waft eastward, passing New Zealand and stretching thousands of miles into the cobalt Pacific. There in plain sight was the result of a disaster so vast that it had already consumed 15 million acres — a figure that would rise to 46 million. Australia’s fires killed dozens of people, destroyed some 5,900 buildings and quite likely rendered some of the country’s endangered species extinct. With shocking iconographic precision, that unfurling banner of smoke said: The war has started. We’re losing.

In the year’s third quarter, the scorching southern summer of 2019-2020 migrated northward under an ever-denser mantle of gaseous fire-accelerant — the carbon dioxide and methane belched ceaselessly forth into earth’s apple-skin atmosphere from 1.4 billion exhaust pipes and hundreds of thousands of factory stacks.

By late summer, much of the United States’ Pacific Coast was ablaze, and I watched both North and South America with mingled disbelief and consternation. Seen via GOES 16 and 17 throughout late August and early September, the entire Western Hemisphere was wreathed in blue-gray smoke — an alarming sight in which large areas of both continents were visible only through thick fumes from burning vegetation.

By contrast with the West Coast, South America’s fires were the result of a willful slash-and-burn assault on the world’s largest remaining tropical forests and wetlands. Egged on by the rapacious policies of President Jair Bolsonaro of Brazil, predatory agricultural, logging and mining interests had set his country ablaze. By late September the already hellish 2019 escalation in deliberately set forest fires had been exceeded by 28 percent, with more than 44,000 outbreaks recorded in the Amazon and Pantanal this year.

Seen from space, the resulting haze spanned approximately six million square miles. It’s unnerving to witness such enveloping madness. The Amazon rainforest is home to some 200 Indigenous tribes. It’s a priceless reservoir of biodiversity — a kind of green ark preserving the results of 800 million years of terrestrial evolution. It is also the world’s largest remaining carbon sink, capable of mitigating global warming by absorbing vast quantities of atmospheric carbon dioxide. But you can’t ask it to absorb the results of its own incineration. 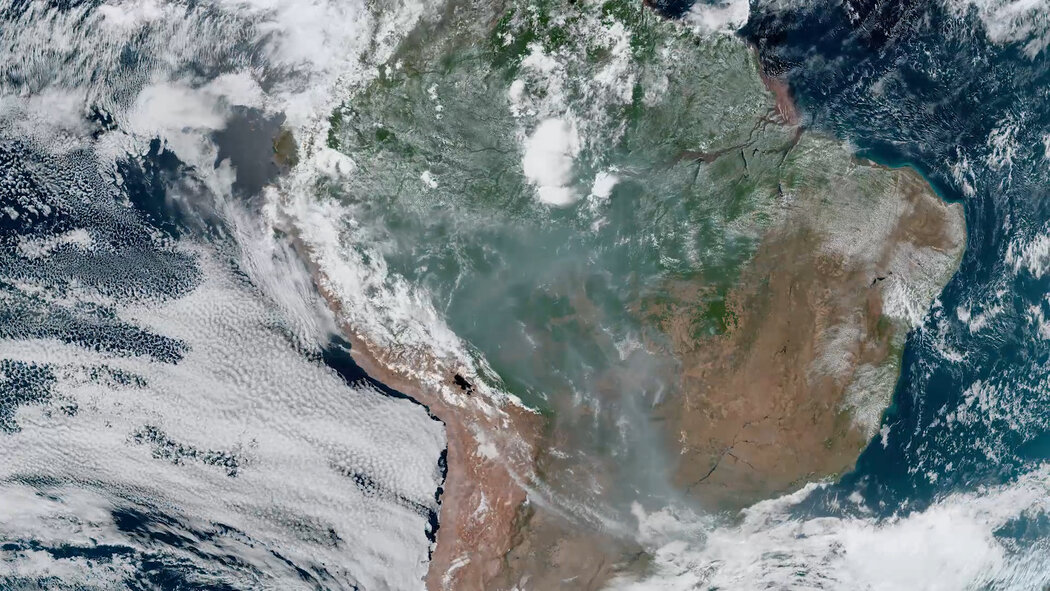 Smoke permeating the atmosphere over South America between Sept. 7 and 16 is visibly lower and grayer than the bright white clouds. (Credit: Michael Benson/CIRA/NOAA)

Meanwhile, North America’s Pacific Coast was choking under successive waves of fume and ash. As with Australia, the forests, chaparral and grasslands of California, Oregon and Washington State had been rendered explosive by a chain of summers so searing that by mid-August this year, Death Valley’s temperature spiked to 130 degrees Fahrenheit — probably the hottest temperature ever recorded on earth.

Logging onto GOES-17 later that month, I contemplated the unfolding tragedy. As seen from over the Eastern Pacific, the continent was bracketed by imminent disaster. Thick smoke obscured most of California. Hemmed in by the Transverse Ranges, it funneled north, breaking free of the coast around Sacramento and billowing toward Canada. Two thousand miles southeast, a majestically frightening pinwheel of clouds was suspended over the Gulf Coast: Hurricane Laura. This pummeling manifestation of warming oceans would kill at least 77 people and cause an estimated $16 billion in damage.

By early September, large regions of Oregon and Washington were also engulfed in flames, and on Sept. 11, the resulting smoke extended 1,000 miles out across the Northern Pacific — a banner mirroring Australia’s of eight months before.

At its source, soot, ash and dust made the air quality of the continent’s western quarter the worst in the world. The intensity of the flames pumped smoke to an altitude four miles higher than a cruising jumbo jet. As the prevailing winds shifted, tendrils as thick as the Mexican state of Baja California extended eastward in striking hues of burnt sienna, their smoggy undulations tracing 10-mile-high wave forms across the continent and revealing something rarely discernible from geostationary distances: vertical relief within earth’s atmosphere.

By September’s end, nearly six million acres had burned on the coast, directly killing more than two dozen people, not counting the strokes, asthma attacks and heart attacks triggered by the smoke. Stanford University researchers estimated those deaths at between 1,000 and 3,000. 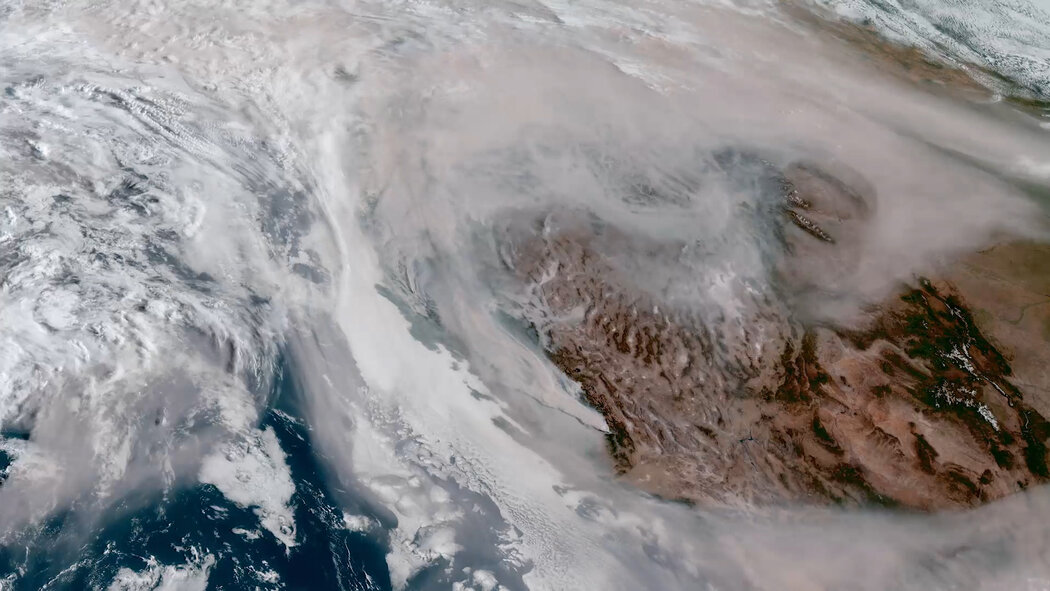 Wildfires burn out of control on the coast in this film made from GOES-17 satellite images taken between Sept. 12 and 16. (Credit: Michael Benson/CIRA/NOAA)

So what are we to make of this yin-yang spectacle, with ourselves at nature’s throat in the south and nature at ours up north? Clearly a tremendous intercontinental drama is underway. Having sown the wind with greenhouse gases for centuries, we’re reaping the whirlwind, sometimes quite literally. Add pestilence to this picture of drought, fire and flood and you have a scene straight out of the Book of Revelation, with the coronavirus, as invisible to the naked eye as it is from space, playing the role of the fourth Horseman, sent by nature to counter our continuing assaults on the natural world. 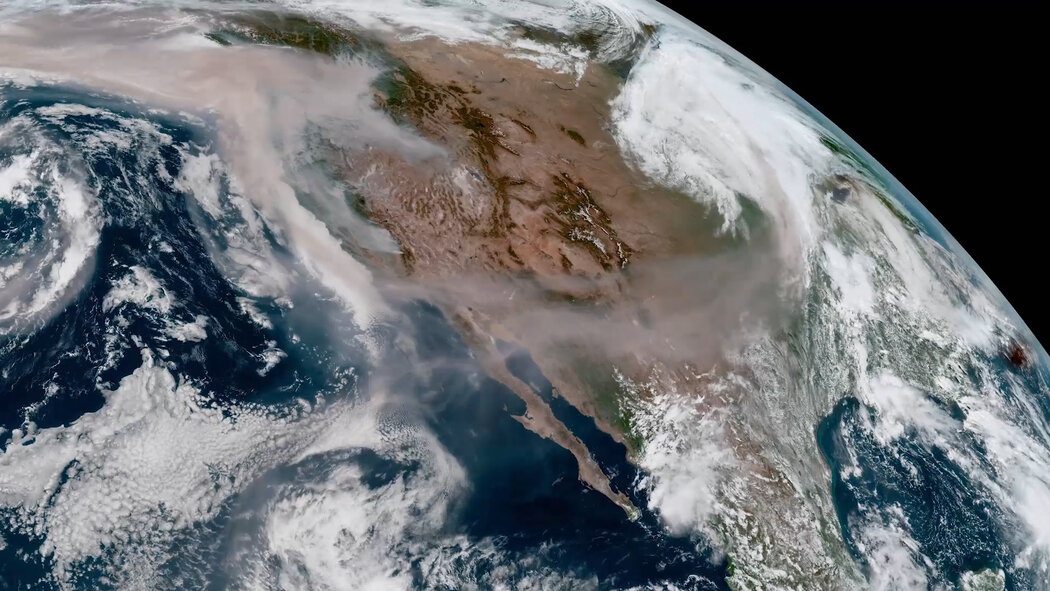 A closer view of West Coast wildfires from Sept. 12 to 16. (Credit: Michael Benson/CIRA/NOAA)

If the war has started and we’re losing, what can we do about it? Or to put it another way, what would I like to see happen over the next year, even if I won’t yet be able to observe it directly from my Olympian perch among the satellites?

Actually, our response to the pandemic already suggests the way forward. Faced with an existential crisis of a scale not seen in living memory, we deployed the planet’s best minds, funded them well and turned them loose on the problem. They in turn were able to draw on a wealth of prior knowledge about how viruses infiltrate our bodies, and three decades of hard-won experience in learning about and finally creating RNA — purpose-built synthetic copies of a natural molecule integral to our genes — devised to prompt an immune response within our cells. This paid off spectacularly. And all this was accomplished in record time — months instead of the previous standard of a decade or more.

We need to follow this immediately with another sustained global effort. Imagine what human ingenuity could produce if unleashed in comparably coordinated, well-funded fashion on the climate crisis. The good news is that, as with the new RNA vaccines, we have significant prior research to draw on. It covers carbon-neutral power production, energy conservation strategies, carbon capture and sequestration, global reforestation and an intercontinental effort to build a high voltage, DC power network 40 percent more efficient than AC and thus able to compensate for the daily fluctuations in wind and solar power systems.

In short, we need an all-hands-on-deck fusion of the Manhattan Project and the Marshall Plan, only this time funded by all of the world’s major economies and led by the largest: the United States, the European Union and China.

It’s a hallmark of the more successful viruses that they eventually stop killing their hosts, adapt and live on in symbiosis. Otherwise they risk reaching an evolutionary dead end. For myself, I’m sick of watching our home world, the birthplace of all known life, in horror and disgust at what we’re doing to it. The earth turns in steady sunlight, its temperature rising inexorably. It’s on us to reverse that fever. After all, we produced it.

Michael Benson is an author and artist currently based in Ottawa. The films in this article were created by Mr. Benson and Chai Dingari of The New York Times, using individual satellite frames from NOAA images.