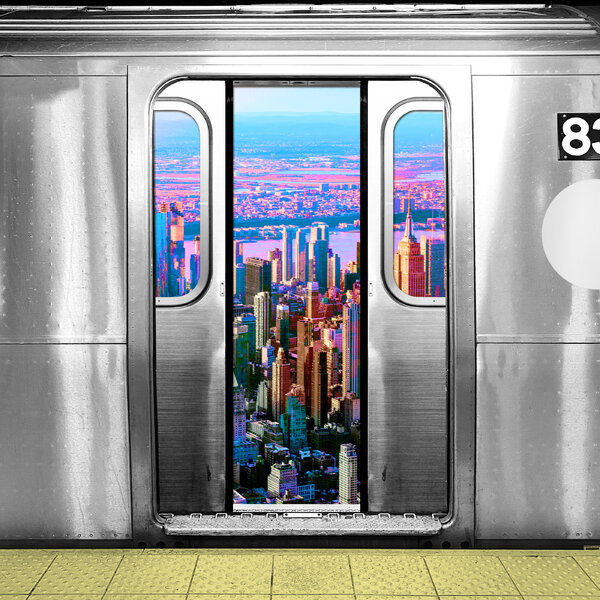 New York City’s subway system has been in the news a lot lately, and not in a good way. There have been several cases of violent assault, including people being pushed onto the tracks, and the number of murders in the system has been far higher this year than in past years. This is even as the overall murder rate in New York City finally seems to be declining from its pandemic high.

These incidents have been terrible, and officials are right to see them as a reason to step up police presence and video surveillance.

So I’m aware that it can seem insensitive to point out that to some extent the focus on subway crime illustrates a point I made in my most recent column: Crime in urban areas, New York City in particular, can seem higher than it is because of high population density, which means that people are more likely to witness a crime than they are in small towns or rural areas.

Attacks in subway cars or on subway platforms during rush hour are an extreme example. When I say that we’ve had a record number of murders this year, that number is nine so far, on a system that even postpandemic often carries more than 3.5 million passengers each workday.

Overall, the subway remains far safer than other forms of transportation. Indeed, one reason New York City is much safer overall than small-town or even suburban America is that far fewer people die in traffic accidents.

And there remain many reasons to praise New York’s subway.

There have been frequent debates about how New York’s system compares with those of other large cities, especially London. New York clearly loses on aesthetics: The system is dingy and yes, you do sometimes see rats on the track. It’s also confusing for visitors; at least once a month I find myself explaining to strangers that no, the express train doesn’t stop at Columbus Circle. On the other hand, the New York subway, with its extensive four-track system — which lets it put many local stops close together while allowing easy transfer to fast express trains — is arguably more functional than its counterparts elsewhere.

And its main function is to make a high-density lifestyle possible. Not everyone wants to live that way, but some do. For what it’s worth, dense urban environments don’t have to be the hellscapes I suspect many Americans imagine they are.

The two New York neighborhoods I know best, the Upper West Side and Jackson Heights, Queens, have population densities of 61,000 and 42,000 people per square mile, respectively. Both have extremely busy main commercial streets but are surprisingly quiet once you get off the main drags. And I wonder whether people who haven’t experienced it appreciate how life-enhancing it can be to have a huge range of services within easy walking distance.

Not everyone would want to live that way. But not everyone wants to live in a car-based metropolis like Atlanta or Dallas, either. It’s only thanks to mass transit systems like the New York subway that the United States can offer large numbers of people an alternative to sprawl. So the subway makes America more varied in lifestyles, which enriches the nation as a whole, both culturally and economically.

The subway also causes people to experience diversity. Not all high-density neighborhoods are diverse: the Upper West Side is an affluent enclave, unaffordable for most people. (Yes, I have an apartment there.) But neighborhoods like Jackson Heights are incredibly diverse, and living in or visiting them gives you a much wider view of humanity than most Americans ever encounter.

Indeed, just commuting on the subway (which I do) brings one into regular, if casual, contact with people of different economic classes and ethnicities, which I consider a social good. Hostility to groups that don’t look or sound like you tends to be highest when you don’t encounter people different from yourself very often.

Finally, one of the uplifting aspects of the subway — not a word you often see applied to the system, but I’d stand by it — is that it demands some consideration for other people. I’m talking about minor stuff, like the orderly way passengers file off a crowded subway car at every stop to let other people off, and then get back on. But to ride the subway is to see large numbers of people behaving well, and only a few behaving badly. I, at least, generally emerge from my commute thinking a bit better of humanity.

Again, none of this is meant to minimize the horror of some recent incidents, or the need to do whatever we can to make the subway safer. But I hope that New Yorkers and others don’t lose sight of the fact that the subway system plays a hugely positive role in the life of a city that offers things no other place in America can match.

Should we all be living in cities?

Is Jackson Heights the world’s most diverse neighborhood?

Comparing the subway with the Tube.