Home » Analysis & Comment » Opinion | Biden Wants to Return to the Iran Deal. He Can Start Here.

There is a window now to restore America’s credibility and bring more stability to the Middle East.

Dr. Ravanchi is Iran’s ambassador to the United Nations. 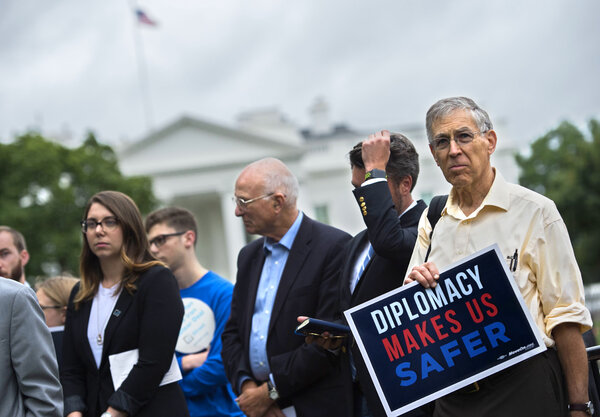 As dawn broke on July 14, 2015, and after intensive and lengthy diplomatic talks, the final details of the Joint Comprehensive Plan of Action — better known as the “Iran nuclear deal” — were finalized. All parties to the accord were hopeful. Javad Zarif, my country’s foreign minister, tweeted: “#IranDeal is not a ceiling, but a solid foundation. We must now begin to build on it.”

This deal was considered by many across the world as an agreement that could change the dynamics in the Middle East. For its part, Iran fulfilled all of its obligations for almost three and a half years from when the deal went into effect in January 2016. The United States, however, has been less reliable. Even during the last months of the Obama administration, the United States was not as faithful a partner as we hoped.

But then came Donald Trump. Mr. Trump campaigned on promises to “dismantle” the agreement. His 2016 electoral victory did indeed change the dynamics in the Middle East — for the worse. Benjamin Netanyahu and other leaders in the region renewed their hopes of harassing and marginalizing Iran. Then, in May 2018, Mr. Trump’s government withdrew the United States from the accord. (Iran, at the request of the remaining participants in the deal, however, continued to comply with the restrictions on its nuclear program for one full year.)

As if the withdrawal wasn’t enough, the Trump administration repeatedly pushed the region to the brink of a catastrophic war. The assassination of Qassim Suleimani, a top Iranian military commander, in January 2020 was the most important of these provocations, to which was added the brazen assassination of our eminent scientist Mohsen Fakhrizadeh in November.

Yet despite these provocations and the fantasies of some Trump administration officials of regime change in Iran, the Middle East has not exploded into a major conflagration. For our part, we have been prudent and patient.

During the Trump years, the Democratic Party, and especially Joe Biden, have been critics of Mr. Trump’s belligerent policies. On various occasions — including in an essay published on CNN’s website in September— Mr. Biden has called for the United States to return to the nuclear agreement. More important, he has committed to reversing Trump administration policies that have increased tensions in the region. Iran would welcome the reduction of tensions in our neighborhood.