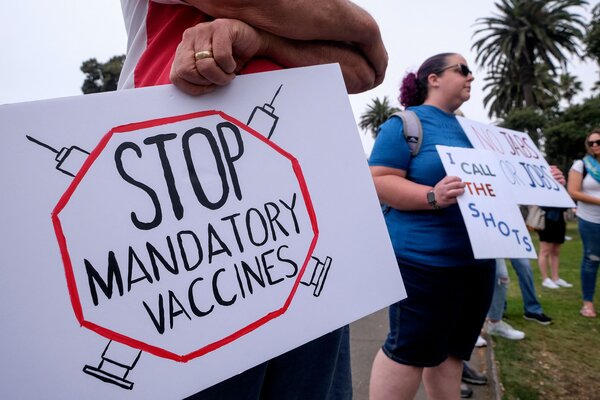 In December 2020, as the prospect of imminent mass vaccination against Covid-19 was finally becoming a reality, Mr. Biden leveled with the American people: He said he would not force anyone to get the jab. “No, I don’t think it should be mandatory,” he told reporters. “I wouldn’t demand it be mandatory.”

Jen Psaki, the White House press secretary, recently reiterated Mr. Biden’s position. “That’s not the role of the federal government,” she declared on July 23, referring to the idea of a government mandate. Rochelle Walensky, the director of the Centers for Disease Control and Prevention, said the same thing a week later: “There will be no nationwide mandate.”

So much for that. On Thursday, Mr. Biden announced a far-reaching vaccine mandate that applies to most federal workers, hospitals, public schools, as well as 80 million employees of private companies. Under the White House’s presumptuous plan, workplaces that employ more than 100 people must require their employees to either get vaccinated or submit to weekly testing — a burden so onerous that for many businesses, it will not be a choice at all.

The president’s plan is certainly well-intentioned. The vaccines are the only tried and true strategy for defeating Covid; government officials should both encourage vaccination and make it easier to get vaccinated. Health officials must continue selling people on the vaccines by emphasizing the considerable upside: Vaccines decrease transmission of the virus and turn hospitalization and death into very unlikely outcomes. They provide such robust protection that 99 percent of coronavirus fatalities in the United States now occur in the unvaccinated population. Vaccination works, and it’s the right option for the vast majority of Americans.