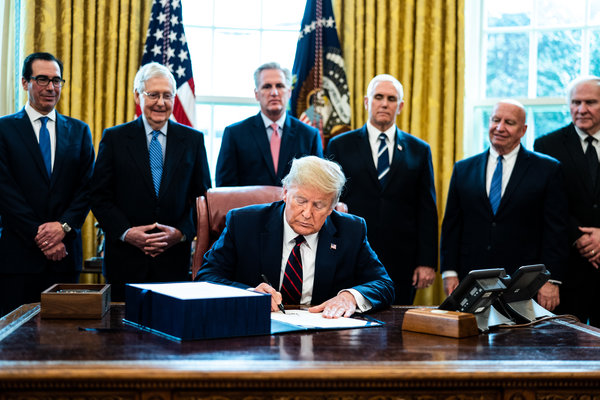 Let me summarize the Trump administration/right-wing media view on the coronavirus: It’s a hoax, or anyway no big deal. Besides, trying to do anything about it would destroy the economy. And it’s China’s fault, which is why we should call it the “Chinese virus.”

Oh, and epidemiologists who have been modeling the virus’s future spread have come under sustained attack, accused of being part of a “deep state” plot against Donald Trump, or maybe free markets.

Does all this give you a sense of déjà vu? It should. After all, it’s very similar to the Trump/right-wing line on climate change. Here’s what Trump tweeted back in 2012: “The concept of global warming was created by and for the Chinese in order to make U.S. manufacturing noncompetitive.” It’s all there: it’s a hoax, doing anything about it will destroy the economy, and let’s blame China.

And epidemiologists startled to find their best scientific efforts denounced as politically motivated fraud should have known what was coming. After all, exactly the same thing happened to climate scientists, who have faced constant harassment for decades.

Well, I recently published a book about the prevalence in our politics of “zombie ideas” — ideas that have been proved wrong by overwhelming evidence and should be dead, but somehow keep shambling along, eating people’s brains. The most prevalent zombie in U.S. politics is the insistence that tax cuts for the rich produce economic miracles, indeed pay for themselves, but the most consequential zombie, the one that poses an existential threat, is climate change denial. And Covid-19 has brought out all the usual zombies.

But why, exactly, is the right treating a pandemic the same way it treats tax cuts and climate change?

The force that usually keeps zombie ideas shambling along is naked financial self-interest. Paeans to the virtues of tax cuts are more or less directly paid for by billionaires who benefit from these cuts. Climate denial is an industry supported almost entirely by fossil-fuel interests. As Upton Sinclair put it, “It is difficult to get a man to understand something when his salary depends on his not understanding it.”

However, it’s less obvious who gains from minimizing the dangers of a pandemic. Among other things, the time scale is vastly compressed compared with climate change: the consequences of global warming will take many decades to play out, giving fossil-fuel interests plenty of time to take the money and run, but we’re already seeing catastrophic consequences of virus denial after just a few weeks.

True, there may be some billionaires who imagine that denying the crisis will work to their financial advantage. Just before Trump made his terrifying call for reopening the nation by Easter, he had a conference call with a group of money managers, who may have told him that ending social distancing would be good for the market. That’s insane, but you should never underestimate the cupidity of these people. Remember, Blackstone’s Steve Schwarzman, one of the men on the call, once compared proposals to close a tax loophole to Hitler’s invasion of Poland.

Also, billionaires have done very well by Trump’s tax cuts, and may fear that the economic damage from the coronavirus will bring about Trump’s defeat, and hence tax increases for people like them.

But I suspect that the disastrous response to Covid-19 has been shaped less by direct self-interest than by two indirect ways in which pandemic policy gets linked to the general prevalence of zombie ideas in right-wing thought.

First, when you have a political movement almost entirely built around assertions than any expert can tell you are false, you have to cultivate an attitude of disdain toward expertise, one that spills over into everything. Once you dismiss people who look at evidence on the effects of tax cuts and the effects of greenhouse gas emissions, you’re already primed to dismiss people who look at evidence on disease transmission.

This also helps explain the centrality of science-hating religious conservatives to modern conservatism, which has played an important role in Trump’s failure to respond.

Second, conservatives do hold one true belief: namely, that there is a kind of halo effect around successful government policies. If public intervention can be effective in one area, they fear — probably rightly — that voters might look more favorably on government intervention in other areas. In principle, public health measures to limit the spread of coronavirus needn’t have much implication for the future of social programs like Medicaid. In practice, the first tends to increase support for the second.

As a result, the right often opposes government interventions even when they clearly serve the public good and have nothing to do with redistributing income, simply because they don’t want voters to see government doing anything well.

The bottom line is that as with so many things Trump, the awfulness of the man in the White House isn’t the whole story behind terrible policy. Yes, he’s ignorant, incompetent, vindictive and utterly lacking in empathy. But his failures on pandemic policy owe as much to the nature of the movement he serves as they do to his personal inadequacies.