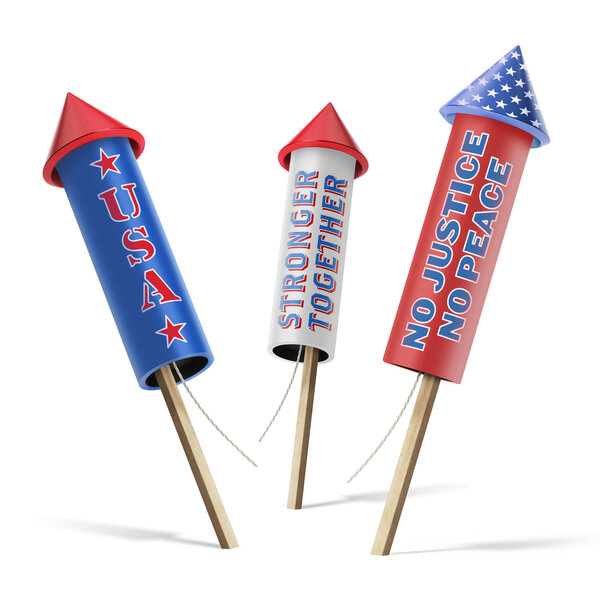 Mr. Britton-Purdy is a professor of constitutional law at Duke and the author of the forthcoming book “Two Cheers for Politics: Why Democracy Is Scary, Flawed, and our Best Hope.”

Fourth of July fireworks echo eerily in a divided country. In theory, this patriotic holiday marks what holds us together, beyond all our disagreement. In practice it amplifies American division. The year that Independence Day memorializes, 1776, also lends its name to the Trumpist 1776 Project, a riposte to the 1619 Project. The very idea of patriotism risks becoming a partisan marker: In 2019, fully 76 percent of Republicans and only 22 percent of Democrats said they were “extremely proud” to be American, according to Gallup.

A recent Quinnipiac poll asked Americans whether they would fight or flee if the country were invaded: 68 percent of Republicans said they would stay and fight, compared with 40 percent of Democrats. Although such questions can only be conjectural, this one does suggest that some progressives are not so sure the country is worth saving, or at least risking their lives to save.

Conservatives often say that liberals don’t really like this country, and these figures suggest they might have a point. In progressive circles, claiming patriotism is, at best, an eyebrow-raiser. As the 245th anniversary of the Declaration of Independence arrives in a country with the world’s highest incarceration rate, sky-high per capita carbon emissions, an epidemic of gun violence and abortion bans across much of the American map, progressive disgust has clear appeal.

But progressives need patriotism, more than ever in a time of understandable anger and despair. We want to make the world better by our lights, and to do that we need a stronger democracy. Patriotism in the right spirit fosters the civic trust and solidarity that democracy needs.

Patriotism shouldn’t be an excuse for glossing over failures and crimes — just the opposite. It adds responsibilities, even sorrows, to our lives. But it also fosters affection and, yes, pride.

The patriotism we need is the patriotism of July 5, which used to be a rallying day for abolitionists, particularly in New York State. Before the Civil War, July 5 was a rejoinder to the hypocrisy of Independence Day, which trumpeted liberty in a country full of race slavery. It was also, for many abolitionists, a day to continue the founding work of Emancipation, to build on and extend a flawed but radical inheritance.

Of course, some radicals, such as William Lloyd Garrison, embraced a fundamentally bleak vision of the country. Garrison denounced the Constitution as “a covenant with death and an agreement with Hell” and pronounced himself “ashamed of my country.” But others such as Frederick Douglass, who was more intimate with the horrors of American life, concluded that American politics was not just a grim fate but also a crucible of transformation.

Douglass, in the famous July 5 speech often called “What to the Slave Is the Fourth of July?” denounced national crimes in blistering terms, but also praised the Declaration of Independence as the pivot-point of Americans’ “yet undeveloped destiny.” Douglass called liberty and equality “saving principles” that the country could still make real.

Many progressive achievements have roots in the July 5 style of patriotism. When President Lyndon Johnson made the case for the Voting Rights Act in a national TV broadcast before Congress in 1965, he called the United States “the first nation in the history of the world to be founded with a purpose”: creating a free society of equal citizens. That purpose was a measure of failure as well as success.

In a country where “Emancipation is a proclamation and not a fact,” Johnson warned, if inequality was not addressed, America would “have failed as a people and as a nation.” The country could “gain the whole world and lose his own soul,” he said, paraphrasing the Book of Mark. The Rev. Dr. Martin Luther King Jr., too, called the principles of the American founding “a promissory note” that had come due, and urged the country to “rise up and live out the true meaning of its creed.”