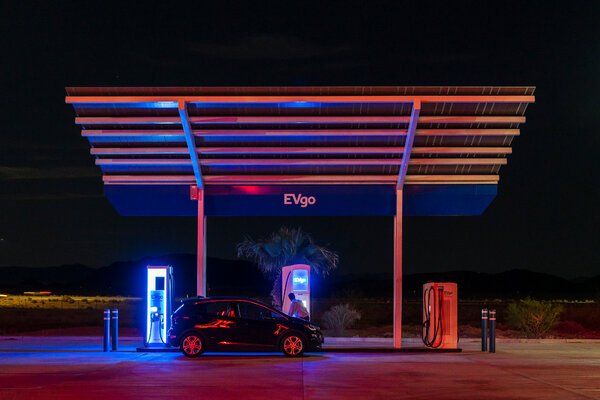 Bravo to General Motors for leading automakers toward an all-electric future. But even as more follow suit, let’s remember that electric vehicles are only as clean as their energy sources. And these sources will continue to extract energy from carbon-polluting fuels so long as our markets neglect their true costs to society.

We must urge Congress to fix this market problem. Before us are legislative solutions like the Energy Innovation and Carbon Dividend Act, which places a fee on carbon pollution and returns the collected money back to Americans. If enacted, this policy will help put tailpipe emissions in our rearview mirrors for good, and clean up the energy sources that propel us forward.

Adam Reed
Longmont, Colo.
The writer is a physicist with experience in clean-energy research.

General Motors’ transition to an all-electric fleet is a critical step toward addressing the risks of global warming. But a large solar storm or electromagnetic pulse event could disable the entire transportation structure for months.

True resilience is enhanced through diversity, in both power sources and engine types. Otherwise, the only vehicles left on the road will be a ’56 Chevy and a few riding lawn mowers.

Greg Blonder
Boston
The writer is a professor of product design and engineering at Boston University.

Owning an electric car is great if you live in a house where you can plug the car in each night to recharge the battery. But what about the tens of thousands of New Yorkers who live in an apartment building? What are we supposed to do? Throw a long extension cord out a window?

And that’s assuming we could get a parking space below the window — a very rare possibility.

The N.Y.P.D. and Attacks on Women

Re “Woman After Woman Was Attacked Near a Subway Stop. Police Kept Quiet” (news article, Feb. 5):

I have worked on improving the New York Police Department’s response to gender-based crimes since 1978. Your article reveals multiple policing weaknesses.

First, after the second attack, with no apparent motive, on women, someone at the Police Department should have wondered if women were in danger at the subway station in question. Instead, shoddy investigative work failed to identify the perpetrator after the first attacks. A lack of coordination between the precinct and the N.Y.P.D.’s Transit Bureau led each to believe that fewer attacks had taken place. Warnings to the public were delayed, and there was a failure to respond to a 911 call reporting a similar crime.

A case with so many systemic flaws should be examined step by step. This review must be conducted with experts from outside the Police Department, with meaningful policy changes adopted and those changes reported to the public.

Mary Haviland
Brooklyn
The writer, a lawyer, is a former executive director of the N.Y.C. Alliance Against Sexual Assault.

As President Biden rallies forces to confront climate change, he looks to science for results. Science provides the means for consensus through facts and evidence-based solutions to overcome the divisive issues facing our country, from the pandemic to climate change, racial inequity and economic disparity.

The logical next step for the Biden administration is to call a Science Summit to attract experts from across the American spectrum. Participants should include scientists who work in government, but also leaders in business and industry, academia and NGOs. Let’s bring together experts in mathematics, physics, psychology, economics, education, medicine, public health, engineering and technology.

Their combined knowledge will equip the Biden administration to tackle our country’s problems, while uniting Americans behind a common vision for progress.