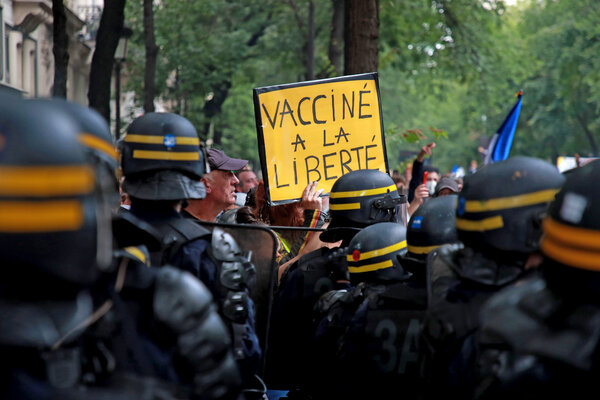 Ms. Bock is a French journalist who writes often about the country’s politics and society.

PARIS — At a time of the year when the French are traditionally divided between “juillettistes” (who go on holiday in July) and “aoûtiens” (who go in August), the past few weeks have seen hundreds of thousands of people coming together with a single rallying cry: “Liberté!”

These protesters are united against France’s new system of vaccine passports, which was announced with much fanfare by the government on July 12 and is gradually coming into effect. The measures, intended to lift the vaccination rate as the Delta variant courses around the country, make proof of vaccination — or a negative coronavirus test — mandatory to get into cultural venues, bars and restaurants. By September, all care workers will need such a passport to retain their job and workers on a permanent contract may be suspended without pay until they can provide one.

Though to some extent successful in its primary aim — in the weeks since, 6.5 million people have been vaccinated, taking the level to 47 percent, about the same proportion as in the United States — the move has rebounded badly against the government. Many people, unhappy at the act of coercion, are taking to the streets in a collective display of defiance, potentially coalescing into a substantial protest movement that could mar President Emmanuel Macron’s re-election efforts next year. As governments across the world consider similar policies, France’s experience is a cautionary tale.

Held on July 14, the first march against the “pass sanitaire,” as the passport is known in France, was attended by 18,000. Within 10 days, that was up to 161,000 — rising to more than 204,000 at nearly 200 marches across the country on Saturday, according to police figures (often considered underestimates). The protesters, pigeonholed by the government as dogmatic anti-vaxxers and conspiracy theorists, are in fact a motley crew. Le Monde, France’s leading newspaper, described them as “alone, coupled up, here with their family or friends, of all ages, white, Black, employed, retired, some vaccinated, others who refuse to get the shot.” They are, in short, a mixed bunch.

Though vaccine skepticism is comparatively high in France — 16 percent of residents don’t intend to be vaccinated, according to a recent survey — by the time Mr. Macron announced the imminent rollout of vaccine passports on July 12, over half the French population, 36 million people, had received at least one dose of the Covid-19 vaccine. Clearly, most French people are not morally opposed to getting the shot. Instead, their concerns center less on vaccination itself than on the freedoms and rights possibly infringed by the new measures.

After all, the social and economic implications are dizzying. Will France’s labor laws have to be changed to include a vaccination obligation? Will it be legal to fire employees who don’t comply? Can businesses, already hurt by the pandemic, survive instituting passports? (Cinemas, which already request health passes, have seen the number of customers nearly halve.)

There are darker concerns, too. Protesters fear that the passports will allow for wide-ranging state surveillance, potentially targeting the most vulnerable and even suppressing dissent. There is no guarantee, they warn, that the system will be retired once the virus is defeated. Ironically, the only trade that’s exempt from mandatory vaccination — the police — will be the one to make sure everyone else obeys. The policy is ripe for authoritarian misuse.

There is no doubt that Mr. Macron’s speech helped boost France’s vaccination numbers. After he spoke, online vaccine booking portals crashed because of high demand, and 3.7 million shots were booked the following week. But it has come at a cost. Hoping for quick results in his usual top-down governing style and a show of strength ahead of next year’s elections, the president may have underestimated how close the French were to boiling point. Wagering that the long-term benefits of vaccination would outweigh the immediate backlash, he seems surprised to have stirred blind rage. His bet, always risky, may not pay off.

The government’s patronizing response to the protests hasn’t helped. In branding the protesters “lunatics” last week, ministers conveniently overlooked that the French people’s growing distrust toward the political class stems in no small part from the government’s poor handling of the pandemic, especially in its early days. In January 2020, for example, the French health minister claimed that the risk of contagion for what was yet to be named Covid-19 was “very low.” That could perhaps be attributed to insufficient information. But in March, a month after French authorities realized they were facing a massive face mask shortage, the government’s spokeswoman declared that masks were “useless” against the virus. Confused and erratic messages were commonplace.

Throw in the fact that the health ministry, citing budget reasons, has continued to reduce the country’s total number of hospital beds during the crisis, the contradictory information shared by clueless ministers and arbitrary lockdown rules, and it’s little wonder why people choose not to believe what the French state is telling them.

In an atmosphere of doubt and suspicion, some people are turning to conspiracy and anti-vaccine theories, weaponized by opportunistic politicians such as Florian Philippot, formerly a leader in Marine Le Pen’s National Rally. The organizer of recent marches in Paris, Mr. Philippot is calling for a “phenomenal coup de force” for Aug. 5, the day France’s Constitutional Council will review the vaccine passport bill. Though the protests are protean, their motivations varied, there is clearly a radicalized minority, vulnerable to populist persuasion.

The marches, with their violent clashes against the press and shocking comparisons to the darkest hours of World War II, are far from an enlightened cry for emancipation. But it’s hard to blame the protesters, either, for reminding us that it didn’t have to be this way. With much-needed public health funding, some coordination, political vision and the honesty to recognize and learn from one’s mistakes, France could have led a strong, informed campaign for vaccination and kept at bay the anti-vaccine political agitators.

Instead, Mr. Macron chose to infantilize the French — and they did not like it.

Pauline Bock (@PaulineBock), a French journalist at Arrêt sur Images, has written for The Guardian, The New Statesman and Politico.