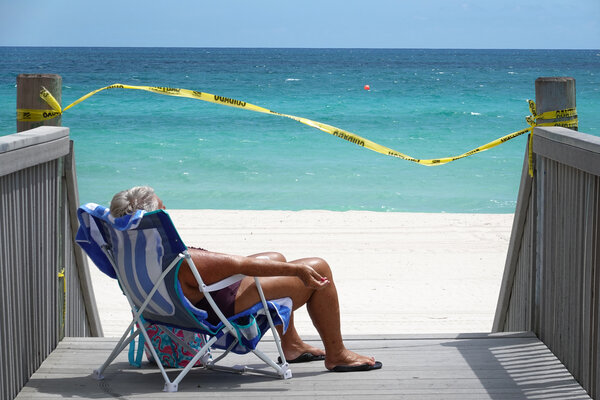 Ron DeSantis, governor of Florida, isn’t stupid. He is, however, ambitious and supremely cynical. So when he says things that sound stupid it’s worth asking why. And his recent statements on Covid-19 help us understand why so many Americans are still dying or getting severely ill from the disease.

We now have highly effective vaccines freely available to every American who is at least 12 years old. There has been a lot of hype about “breakthrough” infections associated with the Delta variant, but they remain rare, and serious illness among the vaccinated is rarer still. There is no good reason we should still be suffering severely from this pandemic.

But Florida is in the grip of a Covid surge worse than it experienced before the vaccines. More than 10,000 Floridians are hospitalized, around 10 times the number in New York, which has about as many residents; an average of 58 Florida residents are dying each day, compared with six in New York. And the Florida hospital system is under extreme stress.

There’s no mystery about why this has happened. At every stage of the pandemic DeSantis has effectively acted as an ally of the coronavirus, for example by issuing orders blocking businesses from requiring that their patrons show proof of vaccination and schools from requiring masks. More generally, he has helped create a state of mind in which vaccine skepticism flourishes and refusal to take precautions is normalized.

One technical note: Florida’s vaccination rate is well below the rates in the Northeast, but closely matches the national average. But seniors are much more likely to be vaccinated than younger Americans, in Florida as elsewhere; and Florida, of course, has an unusually high number of seniors. Among younger groups the state lags behind the nation as a whole, and even further behind blue states.

So, given these grim developments, one might have expected or at least hoped that DeSantis would reconsider his position. In fact, he has been making excuses — it’s all about the air-conditioning! He has been claiming that any new restrictions would have unacceptable costs for the economy — although Florida’s recent performance looks terrible if you place any value on human life.

Above all, he has been playing the liberal-conspiracy-theory card, with fund-raising letters declaring that the “radical left” is “coming for your freedom.”

So let’s talk about what the right means when it talks about “freedom.” Since the pandemic began, many conservatives have insisted that actions to limit the death toll — social distancing, wearing a mask and now getting vaccinated — should be matters of personal choice. Does that position make any sense?

Well, driving drunk is also a personal choice. But almost everyone understands that it’s a personal choice that endangers others; 97 percent of the public considers driving while impaired by alcohol a serious problem. Why don’t we have the same kind of unanimity on refusing to get vaccinated, a choice that helps perpetuate the pandemic and puts others at risk?

True, many people doubt the science; the link between vaccine refusal and Covid deaths is every bit as real as the link between D.U.I. and traffic deaths, but is less obvious to the naked eye. But why are people on the right so receptive to misinformation on this subject, and so angry about efforts to set the record straight?

My answer is that when people on the right talk about “freedom” what they actually mean is closer to “defense of privilege” — specifically the right of certain people (generally white male Christians) to do whatever they want.

Not incidentally, if you go back to the roots of modern conservatism, you find people like Barry Goldwater defending the right of businesses to discriminate against Black Americans. In the name of freedom, of course. A lot, though not all, of the recent panic about “cancel culture” is about protecting the right of powerful men to mistreat women. And so on.

Once you understand that the rhetoric of freedom is actually about privilege, things that look on the surface like gross inconsistency and hypocrisy start to make sense.

Why, for example, are conservatives so insistent on the right of businesses to make their own decisions, free from regulation — but quick to stop them from denying service to customers who refuse to wear masks or show proof of vaccination? Why is the autonomy of local school districts a fundamental principle — unless they want to require masks or teach America’s racial history? It’s all about whose privilege is being protected.

The reality of what the right means by freedom also, I think, explains the special rage induced by rules that impose some slight inconvenience in the name of the public interest — like the detergent wars of a few years back. After all, only poor people and minority groups are supposed to be asked to make sacrifices.

Anyway, as you watch DeSantis invoke “freedom” to escape responsibility for his Covid catastrophe, remember, when he says it, that word does not mean what you think it means.