Home » Analysis & Comment » Opinion | How to Steal an Election

Around supper time on Election Day, 1880, the poll workers in Bolivar County, Miss., were getting hungry. Someone ran out for sardines and crackers. The officials noshed and counted votes until the “violent laxative” that had been added to the Republicans’ sardines started to take effect. Then they ran for the outhouses while the remaining Democrats counted a suspiciously large majority.

As a historian of American democracy, I used to collect anecdotes like this from the mid-to-late 1800s. They dramatized, with outlandish gall, just how different America’s past was from the square politics I grew up with in the late 20th century. But on the eve of an election the president of the United States has declared might be stolen from him, a fear he promises to counter with an “army” of partisan poll watchers, dirty tricks don’t feel so distant. As our politics have darkened, I’ve shifted away from studying spiked sardines, wondering instead how Americans ever stopped stealing elections.

Such thefts are not cute. They robbed thousands of people of their rights, helped kill Reconstruction, and forestalled political reform. We still suffer from these crimes, over a century later. But in a striving nation dominated by what Charles Dickens called “the love of smart dealings,” crooked politicians often chuckled about their cunning. “Instead of wrath” at stolen elections, the humorist James Russell Lowell complained upon returning from abroad, “I found banter.” When the journalist Lincoln Steffens mentioned a St. Louis trick to a party boss in Philadelphia, the two began excitedly talking shop, “as one artist to another.” Although most elections were (relatively) clean, “majority manufacturers” in teeming Northern cities, racially tense Southern districts and new Western settlements laid out two paths for stealing elections — steal the cast or steal the count.

Understanding how these swindles worked can help shed light on what we should and shouldn’t worry about in 2020.

Stealing elections often started with the U.S. Postal Service — central to this election as well. In a nation that was over 80 percent rural, post offices were a choke point for political news. But they were run by deeply partisan postmasters, appointed by the very congressmen they’d help elect, and they frequently “lost” the opposition’s newspapers or correspondences. And because parties privately printed their own ballots in those days, post offices and newspaper publishers could buy up all the paper in town, making it difficult for rivals to get enough tickets. Even the telegraph wires couldn’t be trusted: In the contested presidential election of 1876, Western Union operators sent Democratic politicians’ private messages straight to Republican headquarters.

The tricks grew more confrontational on Election Day itself. Most states lacked voter registration systems, so partisans hung around the polls, challenging illegal voters — on account of age, race or residency — and intimidating legal ones they believed would vote for the rival ticket. Challenges could be oddly intimate, like the elderly Democrat in Civil War-torn Missouri who was threatened by a young man who “I have known ever since he was a child.” They could also lead to atrocious brutality. In the South at the end of Reconstruction, white Democratic rifle clubs “policed” the polls. They invented the term “bulldoze” in 1876 to describe the use of a “dose” of the bullwhip to terrorize African-American voters.

Unlike today, there actually was widespread fraud in casting ballots, what Rudyard Kipling called the uniquely American “art of buying up votes retail.” A glass of lager, $5 or a pork chop sandwich might win over a decisive minority, up to 10 percent in some states. A Norwegian immigrant in Minneapolis was struck by how open this illegal behavior was, often “considered clever and was not concealed.” But an odd code dominated this illicit activity. Jane Addams described the consequences for an unscrupulous man who sold his vote to both parties. He was punished with a Chicago-style tar-and-feathering, his head held under a blasting fire hydrant on a cold November day.

Wholesale fraud trumped buying votes retail. In big cities and new settlements where many voters were strangers, parties practiced what became known as “colonizing”: filling a district with temporary voters. Mid-Atlantic cities saw an election season shell game, with Philadelphians sent to vote in Manhattan and New Yorkers swinging Baltimore elections. In the South, elections were sometimes stolen in the opposite manner. White Democrats conspired to win north Florida in 1876 by sending a large crew of Republican African-American railroad workers to work in Alabama. Their train mysteriously broke down there, stranding them on Election Day.

Ballot fraud was even easier than moving men around, at a time when voters cast a galaxy of paper tickets. There were “tissue ballots,” so thin that a voter could cast ten folded up to look like a single vote, or “tapeworm ballots,” long and skinny to prevent dissenters from “scratching” in names of candidates not approved by the party. When parties began to color-code ballots, some used the opposition’s chosen color to fool illiterates. Among election thieves, “every body thought it was a pretty sharp trick.”

“Stealing the cast” on Election Day was a lot of work, much of it illegal and confrontational. “Stealing the count” was easier. It required quietly turning power into more power, using local officials to swing state elections with national consequences. The notorious Democratic journalist Marcus (Brick) Pomeroy later bragged about throwing opposition votes into the fire when he worked one election in Wisconsin. Missing ballots sometimes showed up, charred and deserted, on Mississippi roads. 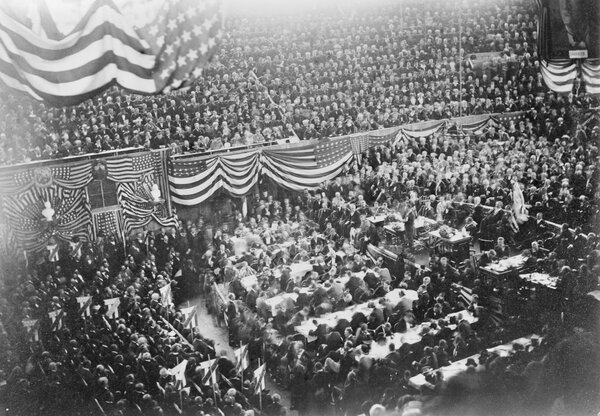 In the 1876 election, while the Democrats decisively won the popular vote, Republican-controlled returning boards in disputed states used fraud, bribery and the U.S. Army to steal the count. In Louisiana, they disqualified whole parishes, throwing out one in 10 votes statewide, 85 percent of them for Democrats. To figure out who would win an election, wrote a furious Democrat watching Republicans inaugurate President “Ruther-fraud” B. Hayes, you needn’t predict the future: “You need only to know what kind of scoundrels constitute the returning boards.”

This ugly history tells us some useful things about the present. First, stealing the vote itself takes an incredible amount of labor. Coordinating machines capable of casting large numbers of fraudulent ballots required massive efforts, amounting to organized criminal conspiracies. Study after study finds that there is no significant voting fraud today, a claim borne out by history: Such a crime takes a lot of work and leaves a lot of evidence.

History also shows that there is a choice to be made. Around 1890 the nation came to a fork in the road. Southern states systematized “bulldozing,” writing new constitutions that made it nearly impossible for African-Americans to vote. With Jim Crow laws and minuscule turnouts, those states ceased to be functioning democracies.

But in the rest of the nation, many were tired of the smirking frauds. The radical Nebraska activist Luna Kellie wrote that until elections were cleaned up, there was “very little use of thinking of any other reform.” James Russell Lowell warned that democracy was in more danger than it had been during the Civil War, because while Confederates seceded with half the nation, crooked politicians were “filching from us the whole of our country.”

Electoral reform became a hot topic, attracting canny reformers and rapt attention. Men who had once colonized districts wrote new elections laws. Steffens, a muckraking journalist whom the Philadelphia boss described as “a born crook that’s gone straight,” published wildly popular studies of different political machines’ dirtiest tricks. Many of our election rules date from that moment, around 1900, when Americans redirected their “love of smart dealings” toward tightening up electoral systems, rather than finding ways around them.

In 2020, America may be at another fork. “Bad men at the ballot box,” as one Texas preacher called them in 1890, may reappear to intimidate voters. Accusations of fraud might motivate spiraling political thefts. Or perhaps all of this anxiety will focus our wandering attention back to neglected electoral practices, as it did after 1890. How elections work — once a powerfully unsexy topic — may well attract the vital interest of activists, donors and students once again.

There’s no telling how the cast and count will go in 2020, but we can hope that the American people know a rotten sardine when they smell one.

Jon Grinspan, a curator of political history at the Smithsonian’s National Museum of American History, is the author of the forthcoming “The Age of Acrimony: How Americans Fought to Fix Their Democracy, 1865-1915.”