This article is a wonky edition of Paul Krugman’s free newsletter. You can sign up here to receive it.

I began today’s column with Janet Yellen’s totally reasonable yet PR-problematic remark that the Fed might respond to an overheating economy by moderately raising interest rates. One question I didn’t get into but seems worth asking is: who disagrees with that proposition, and why? And asking that question seems to me to lead into some more meta issues about when you should — or shouldn’t — base policy arguments on novel economic ideas.

Let’s start with the economic model that, I believe, underlies a lot of the macroeconomic discussion you hear; it certainly underlies much of what I write about fiscal and monetary policy. The basic idea is simple: other things equal, the economy will be stronger the lower the interest rate set by the Fed: 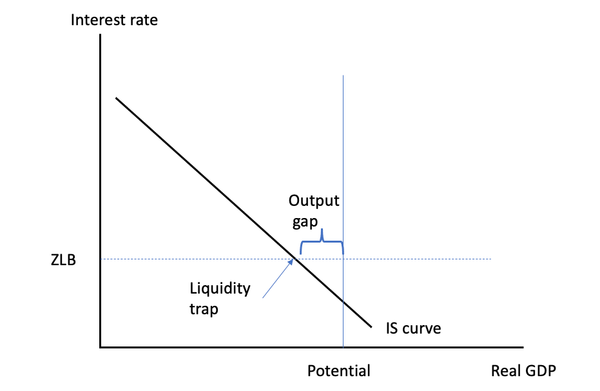 (Why IS? Tradition. It stands for “investment-savings,” and it’s not worth going into why right now.)

The usual caveats apply. Aggregate demand doesn’t respond instantly to monetary policy, so this is a schematic, static representation of something that actually has hard-to-predict dynamics. We don’t have really good estimates of the IS curve’s slope or of the economy’s maximum sustainable potential either, so if you ask, “how much would rates need to fall to achieve maximum employment” all we can provide is a modestly educated guess.

Still, this is enough of a framework to understand the issue that has bedeviled economic policy for much of the past 15 years. The Fed can fight a slump by cutting rates, but there’s a limit to how low it can go — the “zero lower bound,” even if it’s not exactly zero. If that, for whatever reason, turns out not to be low enough, we’re in a liquidity trap, and we need fiscal stimulus that pushes the IS curve to the right to achieve full employment.

This was the logic behind the 2009 Obama stimulus. Unfortunately that stimulus was too small to close the output gap. (That’s not hindsight, I was screaming about it at the time.) This time, however, the American Rescue Plan, although not designed primarily as stimulus, is truly huge, and will probably deliver more than enough stimulus to close the gap and then some.

But will this lead to inflation? Way back in 2009 some of us argued, in vain, that there was much less risk in going too big than in going too small, because if the stimulus turned out to be bigger than needed the Fed could always tap the brakes:

And that’s exactly what Yellen was saying. So who disagrees, and why?

Well, if you don’t believe that monetary and fiscal policy are potentially independent policy instruments — which is what I think the Modern Monetary Theory people are saying, although it’s always hard to pin them down — then you don’t believe the Fed can put the brakes on if the stimulus is more than needed. Notice, by the way, that in this case MMT, if taken seriously, should make you less willing to go big with progressive fiscal policies than if you were a conventional Keynesian: Janet Yellen and I believe that the Fed can contain any inflationary risks, but MMTers, as far as I can tell, don’t.

A more explicit critique comes from Larry Summers, who has warned that the stimulus may lead to stagflation. He appears to believe that the Fed can’t use monetary tightening to offset overheating generated by fiscal expansion without causing a nasty recession. But I have to admit to being a bit puzzled about why. As far as I know — and Summers and I have known each other and been professional colleagues for 40 years — his underlying macroeconomic model is pretty much the same as mine, and the same as the one illustrated in the figures above. And that model seems to say that the Fed can indeed tap on the brakes if needed.

Indeed, the Fed has done that in the past: in the 80s and again in the 90s it acted to rein in booms without causing recessions:

What I think he’s doing is assuming that the Fed will wait too long, allowing inflation to get embedded in the economy before it tightens. That could indeed be a problem — but isn’t that an argument for the Fed to be alert, rather than a reason to believe that it’s hugely dangerous to enact a stimulus that might be bigger than necessary?

In general, claims that we can’t rely on the Fed to rein in inflation if the stimulus turns out to be too big have to rest on some departure from the workhorse model most sensible people use to think about macroeconomic policy. Should you do that?

Obviously no model is sacred, and questioning conventional wisdom is something you should always be doing. But there is a danger in coming up with novel economic doctrines on the fly, especially when you’re using those novel doctrines to justify your political views. Are you really engaging in critical analysis, or are you simply engaging in motivated reasoning?

I speak, by the way, from personal experience. On election night 2016, I let my (totally justified) dismay over the results warp my economic judgment, making a recession call that didn’t flow from my own models. I retracted with a mea culpa three days later. What the episode reminded me was that new thinking should be done with a cool head, and you should be extra careful when it leads to conclusions you want to hear.

I should have known better (and did, after three days) after the history of economics in the aftermath of the Great Recession. When financial crisis struck, there were many calls for new economic thinking, but standard analysis actually did a pretty good job once economists realized that the rise of shadow banking had resurrected old-fashioned bank runs in a new guise.

Yet there was a considerable amount of influential new thinking — not on behalf of effective policies to restore full employment, but to justify austerity policies in the face of mass unemployment. In particular, there were unconventional analyses suggesting that debt in excess of 90 percent of G.D.P. would somehow have devastating effects on economic growth and that fiscal contraction would somehow be expansionary, because it would improve confidence. These novel ideas were enthusiastically adopted by many politicians and policymakers. They also turned out to be completely wrong.

So even if you’re uncomfortable with President Biden’s fiscal policies, you should be very cautious about making arguments against them that rely on novel propositions about why inflation can’t be contained. Conventional analysis says what Janet Yellen said: If the stimulus proves bigger than needed, the Fed can keep things under control. If you’re asserting otherwise, think hard about why you’re saying that.