It is not actually clear that new states are on the agenda should Democrats win in November. House Democrats have passed a bill to admit the District of Columbia as a state, and Representatives Alexandria Ocasio-Cortez and Nydia Velázquez of New York have introduced a bill to let Puerto Ricans hold a binding referendum on their future, but Senate Democrats are still somewhat silent on the issue.

Nonetheless, congressional Republicans have raised the specter of new states as they fight to defend their majority in the Senate.

In June, after the House passed its D.C. statehood bill, Senate Republicans went on a tear against the measure, with Lindsey Graham of South Carolina condemning it as an unconstitutional power grab that would “empower the most radical agenda in modern American politics.” Later, Mitch McConnell, the Senate majority leader, used his time at the Republican National Convention to warn of dire consequences should the District become a state.

They want to defund the police and take away your Second Amendment rights. They want free health care for illegal immigrants yet they offer no protection at all for unborn Americans. They want to pack the Supreme Court with liberals intent on eroding our constitutional rights. And they want to codify all this by making the swamp itself, Washington DC, America’s 51st state. With two more liberal senators, we cannot undo the damage they’ve done.

More recently, on Fox News, Graham — fighting an unusually tough battle for re-election against his Democratic challenger, Jaime Harrison — warned of a “parade of horribles” should Republicans lose the Senate and the White House. “If they win, it is not going to be about a health care debate, he said, referring to the last period of unified Democratic control in 2009, “they are going to structurally change the country to make it harder for a Republican to get elected president. They are going to make D.C. a state, altering the balance of power in the Senate.”

On Twitter, likewise, Senator John Cornyn of Texas — also in a competitive race for re-election against the Democratic challenger MJ Hegar — warned that a Democratic majority in Congress would make D.C. and Puerto Rico states, adding four additional members to the Senate. This would also, he said, mean “nine new members of the Electoral College, equivalent of New Mexico and New Hampshire combined.” Presumably, these states would also vote Democratic in the next presidential election.

Here, it’s worth taking a small step back. Whatever the political and constitutional challenges, the case for D.C. statehood is straightforward: American citizens deserve full representation in Congress. Similarly, the people of Puerto Rico deserve the right to chose their own future. If they decide to remain within the American union, they too deserve full representation. The same goes for everyone under the dominion of the United States: They should be able to choose either independence or representation. It is true that at this moment D.C. statehood benefits the Democratic Party; Puerto Rico, on the other hand, has routinely chosen Republicans for statewide office.

Regardless, there’s no reason to think that in the long run the Republican Party would not be able to compete for votes in either D.C. or Puerto Rico, and yet Republicans believe they are disadvantaged by new states and additional voters.

This is true beyond the politics of statehood. It is well known, at this point, that as a general rule, Republicans are more likely to restrict voters than to encourage them. Across the country, Republican lawmakers and officials have erected new obstacles to voting, from strict voter identification laws (passed immediately in the wake of Shelby County v. Holder, the Supreme Court ruling that killed a key piece of the Voting Rights Act) to poll closures, limits on voter registration and, most recently, new restrictions on mail-in voting. Just this week, the conservative Supreme Court majority sided with Alabama election officials against curbside voting for voters with disabilities. as well as those vulnerable to Covid-19. 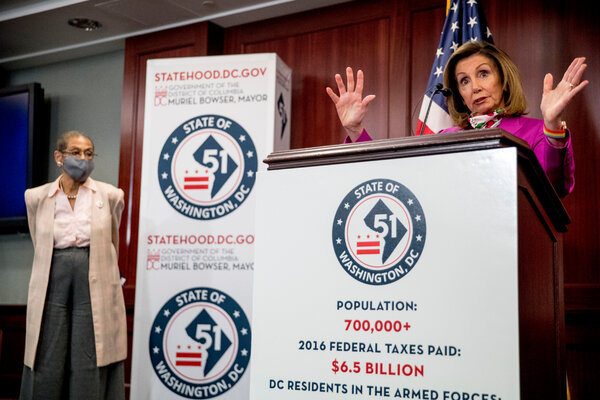 There’s more. Republicans in Wisconsin, for example, have gerrymandered the state so that nothing short of a Democratic supermajority could break their hold on the State Legislature. And the Trump administration, seeking to enhance the power and influence of its white, rural base, has undermined the census, aiming for an undercount that would deprive millions of Americans in cities and other more diverse areas of federal resources and representation.

In this election, Republicans have registered new supporters in their effort to win re-election for President Trump, but the broad pattern is clear: Republicans are hostile to greater democracy, where democracy means equal representation in a federal system of separated powers. Name a proposal that would enlarge the scope of American democracy — more states, a national popular vote, a larger House of Representatives — and Republicans (or their conservative allies) are almost certain to oppose it. Some Republicans, notably Senator Ben Sasse of Nebraska, even oppose existing democratic reforms, like the direct election of senators.

One way to understand this opposition to greater democracy is as a preference for political and constitutional stasis. And this makes sense. The power of the Republican Party in its present form rests on static institutions and a frozen politics. Ending (or radically reforming) the Electoral College would, as Graham said, make it more difficult for Republicans to elect a president, meaning they could no longer win a presidential race while losing the popular vote itself. Creating new states would disturb the balance of the Senate and possibly make it more difficult for Republicans to win a majority in the chamber. Expanding the Supreme Court and the federal judiciary would harm the Republican effort to undermine federal election protection and allow voter suppression and disenfranchisement.

The Republican Party as currently constituted is a minority party representing a demographically narrow segment of the American electorate. It needs stasis — institutional and constitutional — to survive. Democrats do not. Just the opposite, they need a political system that can grow with and respond to change within our society. Progressive government is necessarily active government. And if we can speak of original intent, it was not the intent of the founders of this country to have a static government, a static constitutional order, or — for that matter — a static society.

The question of whether Democrats will abolish the filibuster or expand the courts or create new states, should they win power, is actually a question of whether Democrats will bring dynamism to the American political system. The prospect is daunting. But if they have any desire to reverse the damage of the past four years — if they want to return to something like normalcy — then the path to stability begins with transformation.