It’s a measure of the Republican Party’s current depravity that I think of the period when Marco Rubio was besmirching Donald Trump’s genitalia as the good old days.

It was early 2016, Trump hadn’t yet locked down the Republican presidential nomination and Rubio, smarting from Trump’s nickname for him (“Little Marco’) and cracks about his overactive sweat glands, began pointing voters toward Trump’s private parts.

“He’s, like, 6-2, which is why I don’t understand why his hands are the size of someone who’s 5-2,” Rubio told voters at a campaign rally in late February that year. “Have you seen his hands? And you know what they say about men with small hands.”

All four seem to have dreams of 2024 and don’t want to run afoul of Trump and his base, no matter how thoroughly that debases them. They’re vain weather vanes of his hold on the party, the strength and stubbornness of which are evident in the populous crowd of Trump-smooching presidential aspirants (these four, Mike Pompeo, Nikki Haley, etc.) versus the sparse crew of Trump-spanking ones (Larry Hogan, Ben Sasse and that’s about it).

As Trump’s impeachment trial looms, everything that these young or youngish senators say and do can be seen as an audition for his mantle, which Hawley and Cruz reached for with special cynicism when they joined six other senators in voting not to certify Joe Biden’s election. Rubio and Cotton didn’t go quite that far, but I’m sure Rubio was tempted. Ever since, he has mustered extra energy for showing what a fierce Trump loyalist he can be.

On Fox News recently, he dismissed Trump’s upcoming Senate trial as “stupid,” seemingly daring Hawley, Cruz and Cotton to top his disdain and his adjective. He paired that exalted commentary with an inadequately punctuated, inelegantly worded and ineptly reasoned tweet:

Five people died when a Trump-loving mob, whipped into a violent frenzy by his and his Republican enablers’ lies about election fraud, stormed and trashed the Capitol. But sure, Senator Rubio, Democrats’ upset is purely theatrical. Absolutely, the lesson here is the bloodthirst of “the radical left.” 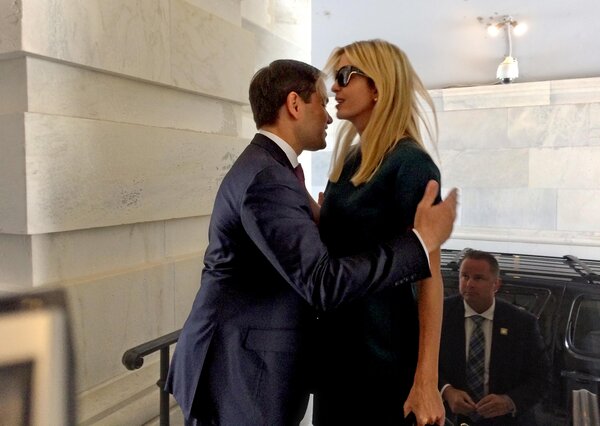 It also smacks of desperation. “Little Marco,” you see, may have big trouble. It’s blond, it’s relentless, it has a new address in Florida and it’s spelled I-V-A-N-K-A. The shiniest Trump and her smug husband, pariahs now in New York City, have moved on, and there’s some speculation that their relocation presages a Senate candidacy for her in 2022, when Rubio is up for re-election.

She’d potentially challenge him in the Florida Republican primary. Now there’s a reason to sweat. Rubio confronts what Republican lawmakers all over the country do, the prospect of being ousted, en route to their general elections, by rivals who are even Trumpier than they are. Only there’s no out-Trumping an actual Trump. And there’s no defaming this Trump progeny without inflaming the Trump patriarch.

Ivanka would be Rubio’s worst nightmare. She’d also be his perfect comeuppance. He would have done that shape-shifting, summoned all that sycophancy and sold out for naught.

Maybe Ivanka would take pity on him and take a pass.

Yes, that was a joke.

As, at this point, is Marco Rubio.

I can remember back to 2013, when, as a member of the bipartisan “Gang of Eight” in the Senate, he helped to draft legislation for comprehensive immigration reform, including a path to citizenship for millions of people in this country illegally. He was then styling himself as a pragmatist determined to broaden the Republican Party’s tent.

Now he rails against “amnesty.” He’s a Trump-style populist, content with a clownish part in the Republican Party’s circus.

I remember how his parents’ flight to the United States from Cuba was the supposed cornerstone of his political convictions, the prompt for a hawkish foreign policy with no tolerance for autocrats at odds with our democratic values.

But he just spent four years blowing kisses at an American president more autocratic and more contemptuous of those values than any in his lifetime.

I remember how, for much of 2016, he pledged that he would not-not-not run for re-election to the Senate, framing that resolve as a point of honor. He said that it was an impotent institution and that lawmakers needed to limit their time in Congress, lest they become hacks. He expressed indignation at any suggestion that he would change his mind, tweeting: “I have only said like 10000 times I will be a private citizen in January.”

That was in mid-May of that year. Little more than a month later, he announced his re-election bid. So much for private citizenry.

Rubio says whatever he feels that the moment demands, whatever keeps the wind in his sails, because he’s unfazed by the fact that he once said something completely different, by the possibility that he’ll contradict himself down the line or by the bald selectiveness of his self-righteousness

He’s a creature of Republican vogues, so he’s polishing his anti-elitist riffs, like a tweet with which he slammed the emerging Biden administration:

Politeness! Order! The horror! But that’s not the best part. Biden stands out from his five immediate predecessors in the White House, including Trump, for not having the Ivy League degrees that they did. Where there’s fancy education aplenty is in Rubio’s ranks: Hawley has degrees from Stanford and Yale, Cruz from Princeton and Harvard and Cotton from Harvard two times over.

Maybe Rubio was slyly knocking those potential 2024 competitors, too, and previewing a line of 2024 attack. His own degrees are from the University of Florida, the University of Miami and the School of Unchecked Opportunism.

To his anti-elitism he has added overwrought, indiscriminate media bashing, as when he responded to the coronavirus’s rampage through America with a tweet last March that accused journalists of “glee & delight in reporting that the U.S. has more #CoronaVirus cases than #China” and called it “grotesque.”

I don’t recall such glee. I’ll tell you what’s grotesque: training more of your fury about the pandemic’s devastation at the unelected people covering it than at the elected one minimizing and mismanaging it.

He was preening for Trump. He was parroting him. He still is, and he’s proving that while Trump may be gone from the White House, he remains deeply present in Washington, because it’s lousy with minions who remade themselves in his image.

Rubio’s fate was to become what Trump once called him, not just exuberantly but prophetically: a little man, at least by the yardstick of integrity, which is the only endowment that matters.