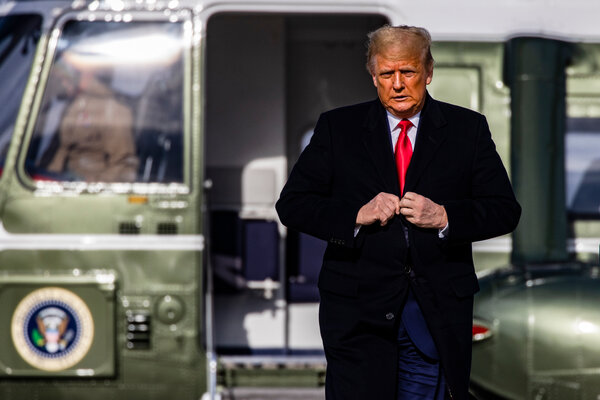 This reader is disturbed not to see the following headline on the front page: “President Considers Using Military to Overturn Election.”

Have we reached the point where it is not major news when our president mulls a proposal to declare martial law and use the army to override American democracy? Perhaps Donald Trump’s cogitations are now deemed too unhinged to take seriously. Yet for the last four years his bizarre, reality-free tweets have been deemed newsworthy.

That Mr. Trump cannot get America’s military to join in perpetrating a coup scarcely makes it a minor matter that a president of the United States has explored the possibility. Equally significant is the nonresponse of Republican officeholders.

When Mr. Trump pinned his hopes on judges reversing the voters’ verdict, the attitude of silent G.O.P. leaders appeared to be “not likely to work, but more power to you, Mr. President, if you can pull it off.” Perhaps they have the same attitude toward militarizing American politics.

What Right Do We Have to Guantánamo?

Over the years, there have been discussions over Guantánamo Bay prison and its inmates, but there has not been enough discussion about what right we have to be there in the first place.

The colonial treaty we imposed on Cuba in 1903 (modified in 1934) allowed the American use of the base only as a coaling and naval station, which certainly did not include a prison complex. In any case, colonial-imposed treaties should not be viewed as valid.

We have long felt that Cuba should be our property. President James Polk offered Spain $100 million to buy the island. President Franklin Pierce increased that to $130 million, while President Willliam McKinley upped the offer to $300 million. When Spain still refused to sell, we invaded Cuba and turned it into a colony or protectorate that lasted until the Castro-led overthrow of Batista in 1959.

The 1903 treaty, which we had compelled the occupied Cubans to sign, gave us the naval station in Guantánamo Bay. But we nullified it by violating Article II, which declared that the base was “for use as coaling or naval stations only, and for no other purpose.” This does not include a prison complex. The real issue is our imperialism.

The prolonged Covid-19 pandemic has led to an increase in the number of patients who present with late-stage, previously undiagnosed cancers, and recurrence of a previously diagnosed malignancy.

This is probably due to the reluctance of people to seek medical care because of fear of contracting Covid-19 at medical facilities; the closing or reduction in clinical services; the requirement to obtain Covid-19 testing before some medical procedures; and the use of telemedicine without physical examination instead of an actual office visit.

It is important that people not defer their medical care during the pandemic. It is especially important that those who previously received a cancer diagnosis continue their treatment and follow-up. Those who experience new or unusual signs and symptoms that may indicate aggravation of their condition or a new ailment should seek medical care without delay.

Postponing care or ignoring symptoms may lead to complications and deterioration, making future care more difficult and leading to increased morbidity and mortality.

Itzhak Brook
Washington
The writer is a professor of pediatrics at Georgetown University.

Re “Just How White Is the Book Industry?,” by Richard Jean So and Gus Wezerek (Opinion, nytimes.com, Dec. 11):

The authors posit that the disparity in publishing rates between Black and white authors is primarily due to the dearth of Black gatekeepers in the industry. In addition, it is critical to understand the systemic barriers that prevent countless Black authors from getting to the gate.

Writing a book requires access to critical resources: books as a child, formal classes that teach the craft of writing, a community of writers, the kind of financial support required to write an entire novel with no pay, published Black role models, the insular network of literary agents, among other barriers.

Success requires access to an ecosystem of knowledge, networks and support. Until aspiring Black authors are embraced and bolstered at the same rate as aspiring white authors, the literary canon of the future will never be as glorious and impressive as all the people who have a story to tell.

Deborah L. Plummer
Katherine A. Sherbrooke
The writers are authors and board members of GrubStreet, a creative writing center.

A week ago, our discussion over dinner regarding President Trump and the massive hacking of our government and American industry turned into an exchange of predictions.

“I bet he blames China,” I suggested. My husband replied, “He’ll say it’s a hoax.” In our final exchange on the topic, we predicted he might even blame the breach for the election results.

So there was no surprise when we read “Trump Shifts Hack Blame From Russia” (front page, Dec. 20), which confirmed we were right on all counts.

Mr. Trump’s supporters often say they like him because he is unpredictable. Au contraire, after watching and listening to him ad nauseam for four years, we find him very predictable. And dangerous.