On a recent Saturday, a group of Black and brown Muslim men gathered in rows along a broad sidewalk to kneel in afternoon prayer at Masjid At-Taqwa, a mosque in Bedford-Stuyvesant, one of the areas in New York City hardest hit by the virus.

A tall, round, middle-aged man, who introduced himself as Salahuddin, told me how for most of the frigid, surprisingly icy pandemic winter, this ritual couldn’t happen. But temperatures were now mercifully tilting above 60 degrees again. “It’s beautiful,” he said, looking down the block.

A mile and a half from the mosque, in Fort Greene, the scene could be described as guiltily giddy. At Tacombi, a Mexican taqueria with several chic locations around the city, a set of youngish patrons wearing light sweaters tucked along the parking-space-turned-patio-area, sipped margaritas and laughed with friends it seemed they hadn’t seen in a while. All of the diners going out of their way to ingratiate themselves with the wait staff, surely hypersensitive to the ongoing discourse about the subpar treatment of essential work. 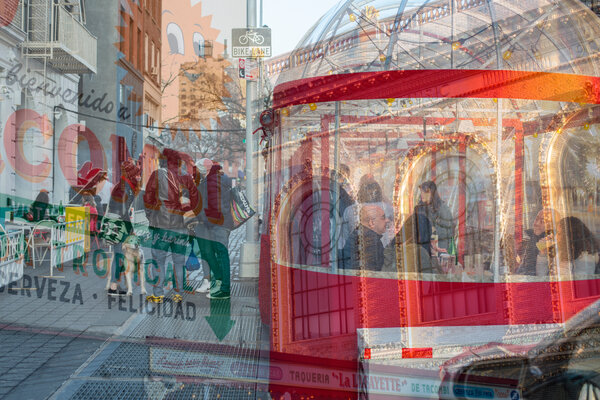 “This is the light at the end of the tunnel for us,” Eddy Fontana, Tacombi’s general manager, told me. Then he hedged, “For those of us who’ve made it.”

Last year, New Yorkers were deprived of their annual vibrant emergence from winter hibernation as thousands died from Covid. Even after the relaxation of stay-at-home orders and the start of summer, when cases in the city plummeted, an uneasy feeling of purgatory loomed over many outdoor hangouts.

With a mass vaccination campaign well underway, many New Yorkers I spoke to in neighborhoods across the city seemed buoyant — a mood that has felt foreign lately — even as others struggle to come to terms with all they’ve lost, and how that loss was so unevenly shared. Now comes a delicate balancing act: guarding against a diminished but not defeated virus while addressing the economic, cultural and collective mental need to open ourselves up again.

Since last March, thousands of New York City’s restaurants have permanently closed. Lower-wage workers, concentrated in the high-contact service industries that have struggled most, made up the largest share of the city’s 13 percent unemployed at the end of January — three times the rate a year earlier. About one-third of local small businesses might not make it to the other side of the pandemic.

In an attempt to stave off more economic suffering, last week New York State allowed indoor dining capacity to increase to 50 percent, from 35 percent — even though Covid-19 cases in New York City have remained stubbornly high after a dip in hospitalizations and deaths in February. The relaxed rules are a big relief for the city’s countless hole-in-the-wall joints, which tend to have limited capacity for outdoor seating.

In October, Nick Padilla, a restaurateur in Greenpoint, had to close Alameda, a small cocktail bar and restaurant, after a dispute over rent. But he hasn’t given up: Improving business conditions persuaded him to stick with his plans to open a new place.

“If you’ve made it to the other side,” he said of the spots still standing, “I’m pretty positive that everybody’s going to have a pretty great summer.”

The markets, which are currently high on sectors that could benefit from reopening, would seem to agree. Despite concerns about coronavirus variants upending plans for resuming in-person commerce, most experts are bullish about the American economy. Goldman Sachs analysts predict the U.S. economy will reach 8 percent growth by the end of the year.

For New Yorkers like Mr. Padilla hoping to start ventures, the spike in office and storefront vacancies has led to bargains on retail space. According to the Real Estate Board of New York, rents on retail space in the city have dropped by as much as 25 percent from their 2019 peaks.

With the return of the city’s tourist economy still far-off, the mayor’s office has rolled out an Open Culture program that will offer entertainment and culture venues permits to host socially distanced performances at over 100 street locations. Governor Andrew Cuomo announced that sports stadiums can have limited crowds in the stands starting April 1, just in time for baseball’s opening day.

Brunch is back, too, with pent-up revelry. At the height of the pandemic, Tribeca and SoHo emptied out as the New York elite fled. But the coifed, comfortable crowd at Odeon and other staples up and down West Broadway has returned for its bloody marys and mimosas.

Across the East River in North Williamsburg, lines of people waited outside several popular boutiques like Catbird still limiting their indoor capacity. Nearby, Ubers deposited Brooklynites for their days about town, darting among the restaurants’ new alfresco setups and lumbering, honking buses.

Tika Girung, an Uber driver from Jackson Heights in Queens, told me he knew a dozen or so people killed by the virus. So he’s relieved to have received his first shot of the Moderna vaccine. Driving through the Bronx, Mr. Girung expressed excitement for the spring. “It will bring some easiness to everybody,” he said. “People want to come out.” More riders mean more take-home pay.

With packed subways still likely to be a turnoff for many this summer, executives at ride-sharing platforms anticipate sky-high demand that could create a serious shortage of drivers. Uber’s chief executive, Dara Khosrowshahi, recently called it “the one thing” that he’s “worried about” for the second half of the year.

Mr. Khosrowshahi won’t have to worry about the company’s 80,000 or so drivers in New York City, some of whom slept in their cars during the pandemic, receiving a higher wage floor or getting employee benefits. The company did quickly get them qualified as essential workers, making them eligible for vaccines — a move that will help stabilize revenue.

Currently, 80 percent of adults in New York State are eligible for vaccines. But as the percentage of the immunized grows, individuals will be asked, again, to navigate a maze of risk assessments that’s already proving more complex than the last.

At a packed, boisterous Washington Square Park, I met Sam de Oliveira and Audrey Golden, both 24. They were frustrated by what they see as contradictory guidance from the city. While they said they identified as liberals, believed in the virus’s dangers and always wore masks in public indoor spaces, they said younger, low-risk New Yorkers hanging out indoors again should be allowed.

“People are already doing it anyway,” Ms. Golden said. Ms. de Oliveira added that she felt it was unfair for indoor dining to remain “sort of stigmatized.”

It’s not only the food and drink sector that feels tugged in two directions. Mr. Cuomo, for instance, has allowed indoor group fitness classes to begin again, with some precautions. But a few reopening decisions by the state, especially on gyms, have irked New York Mayor Bill de Blasio and made some city health experts queasy. “The State of New York continues to make decisions without consulting the City of New York or our health experts or any locality, and this is why we need local control,” the mayor said last week.

Throughout the five boroughs, the air of a burden lifting is palpable. Bikers, runners and stoop hangouts among friends, dogs and families now dot the side streets and avenues. But what exactly good behavior looks like, more broadly — beyond the obvious no-no of something like a raging house party — is confusing business.

From Flatbush to Long Island City and across the river to Harlem, pickup soccer and basketball is back — but, naturally, no one playing is wearing masks. Anyone who has recently ridden a packed subway or bus deep in a borough — where ride hailing isn’t an affordable option for many — knows the continued increase in Metropolitan Transportation Authority ridership is incompatible with social distancing. And do local health officials really expect vaccinated people at large to congregate with only one other household, as the Centers for Disease Control and Prevention recommends?

“Summer is going to be wild,” a friend of mine told me last week. “And bad. Well, hopefully not.”

“We get it. Everyone is tired of the virus and eager to get back to some semblance of normal. But we have a chance to be in the homestretch of this marathon,” the New York City health commissioner, Dr. Dave A. Chokshi, told me. “It requires continued discipline and vigilance, including by younger people and those who may not feel they are at risk.”

For some in the city, the warm weather is more than a recreational delight; it’s a chance to boost turnout for protest. At the top of the hill in Sunset Park on a Sunday with temperatures in the 50s, a multiracial crop of about five dozen demonstrators gathered for a march to protest a rezoning plan that would expand luxury development in the gentrifying area.

Brian Garita, 24, a graduate student at Baruch College whose family was displaced from Sunset Park, helped lead the march. “Many of the folks we know can’t afford apartments in this neighborhood anymore,” he told the people in the crowd, who nodded and offered a mix of Spanish and English affirmations. “This community development isn’t for this community.”

As the Covid-19 crisis laid bare New York’s inequality, it became common for its privileged “Zoom class” residents to pledge to fight for justice. But it’s hard to deny the creeping feeling that as times feel ordinary again, the well-off will grow complacent about the continued suffering of others. All the struggles that disproportionately afflicted the working class, unhoused and structurally disadvantaged before and during this crisis will persist. And wage earners won’t be the ones pocketing most of the gains from the Great Reopening.

Still, Mr. Garita thinks the city’s mayoral election this year will keep a spotlight on inequality. And he said he’s “really hopeful” that protests in the summer “will continue to disrupt the economy and people just so they can wake up a little bit and see what’s going on.”

His optimism made me feel better about briefly forgetting systemic problems as I sauntered through Downtown Manhattan, absorbing some sights of New York being New York again: Every seventh person you see walking around as if he or she were the protagonist in some unwritten novel, the winding mélange of accents, skin colors, vibes and outfits.

I stopped in at the pop-up patio of Swift, one of my Before Times haunts. When my favorite bartender, a middle-aged Irish guy, greeted me, I felt overjoyed — far more emotional than expected. Maybe because each of us knows that not everyone or everything will be as it was when we left it last March.

As he placed a perfectly poured pint of Guinness before me, I sheepishly admitted to him that, somehow, over the past year I’d forgotten his name.

How do you feel about your community reopening?