Most Jews in history have not been free, whether from murderous regimes, famines or pandemics like this one. What we have been is devoted to the idea that we deserve to be.

Ms. Newhouse is the editor in chief of Tablet Magazine, which just published “The Passover Haggadah: An Ancient Story for Modern Times.” 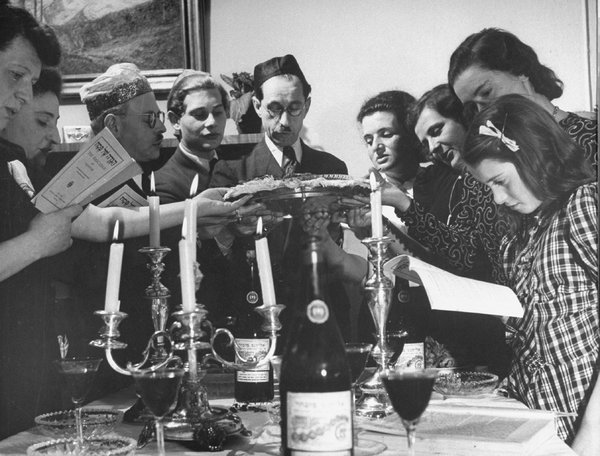 This year, Passover falls at the beginning of April — smack in the middle of what some experts estimate will be the peak of the coronavirus pandemic in America. It’s not just the timing of the holiday — built around a retelling of the Jews’ exodus from slavery in Egypt — that feels off. It’s that every aspect of its story and rituals now seems almost cruelly ironic.

The Passover Seder centers on the experience of being thrust out of our homes, but these days we feel trapped inside of them. The story involves miraculous plagues that saved us; today we pray for the end of one. There’s the commandment to clean our homes of all non-Passover food, which we just spent innumerable hours and dollars hoarding.

Then there’s the real heartbreaker: The Seder is when we traditionally gather with family, friends and even strangers. “Let all who are hungry come and eat,” we say. These days, many of us can’t even be in the same house as our own parents or children. We don’t come within six feet of strangers.

And yet, there will still be Passover. Indeed, I’ve come to think of Passover as the stem cell of the Jewish people, a reserve of core source material with the proven ability to generate new meaning and solace in circumstances even more extreme than what we are living through now.

Perhaps you’re disappointed because you can’t celebrate the way we’re used to. But do you also remember matzo, the unleavened cracker we eat because Jews rushed out of their homes before their bread could rise? The entire holiday is rooted in glorifying a moment when life unfolded in very unexpected ways — and human beings found meaning, even liberation, in it.

The Bible includes various relevant mentions of Passover: One, in Exodus, of the Feast of the Passover, and several others (in Exodus, Leviticus and Deuteronomy) of the Feast of the Unleavened Bread. Historians believe these were originally maintained by two distinct segments of Israelite society, for whom spring meant slightly different things. For the seminomadic part of the community, it was a signal that it was time to start moving again; but before doing so they would sacrifice a lamb to ward off evil spirits that might block their path. For the settled folks, it was an agricultural holiday, a joyful welcoming of the incoming spring harvest.

Most scholars believe the two holidays were eventually combined in 622 B.C.E. — when, on the orders of Josiah, the king of Judah, a national celebration emerged, which had at its heart a pilgrimage to the Temple and the killing of a Pascal lamb. Intended or not, the process looks poetic in hindsight: Elements were taken from each of the previous commemorations — the sacrifice from the former, the joy from the latter — and a Jewish future was made.

It didn’t last. Or rather, the Temple didn’t, but Passover certainly did. After Jerusalem was sacked in 586 B.C.E., the Jews were forced out of Judea into what became known as the Babylonian Exile, taking with them this powerful reminder that a people who had been brought out of exile to freedom might once again retrace that journey.

More than 2,500 years later, the Passover Seder has not simply survived. It is now, by a long shot, the most popular Jewish religious observance. And what it is, essentially, is an agglomeration of a long and global inheritance. The basic order of the evening stretches back to the third or fourth century; we end the night with a set of group songs from the 15th century; some of us whip one another with scallions during the song “Dayenu,” a tradition designed by Persian Jews; and we all make different kinds of charoset, the sweet paste meant to signify the mortar used by the Jewish slaves. Italian Jews use eggs. Gibraltan Jews make theirs with the dust of ground bricks. And African-American Jews incorporate sugar cane, and cocoa powder, the crops of American slavery.

Rabbis, scholars and communal leaders differ on exactly why Passover maintains this enduring power. Some argue that it is simply central to the religion — one of the three times a year when the ancient Israelites would make that pilgrimage to the temple in Jerusalem. Others point to the accessibility of the Seder ritual itself, which allows people of varying levels of knowledge and experience, including non-Jews, to participate.

Part of the credit, I believe, goes to the Haggadah, the text at the heart of the ritual. Less a prayer book than a step-by-step guide, the Haggadah sets out the order of how one is to fulfill the commandment of telling one’s children about the liberation of the Jews from slavery in Egypt — through a set of now-iconic blessings, parables, symbolic foods and songs, and with the specific encouragement for participants to question and challenge the script. Ten Plagues! Four Sons! Bitter herbs! Why Is This Night Different From All Others? There is in this one evening the roots of so much of what reads as Jewish, to us and others: the drama, the humor, the contrariness, the chosenness, the enough-already-ness.

Unlike the Torah or Talmud, which are considered inviolate, the Haggadah developed as a kind of semi-codified artifact, customized by individual Jewish communities throughout history.

Recently, some of my colleagues and I set out to create an American Haggadah — one that included the entirety of the traditional text along with elements that speak to the particular history and experience of Jews in this time and place, like entries not just on the Four Sons but also the Four Daughters; essays on food waste; cocktails based on the Ten Plagues; and more.

While putting it together, I was struck by something I hadn’t ever fully explored — that of all the things included in the universe of Haggadahs, one thing is conspicuously missing from them all: the story of the exodus itself.

“The Haggadah is like the theater sets and costumes and reviews of a play, without the actual play,” Rabbi Noa Kushner of San Francisco told me recently, about a month before the coronavirus began derailing everyone’s Passover plans. All of a sudden the quixotic words of my high school rabbi came back to me: “Reading the exodus is for the already free.”

Most Jews throughout history have not been free, whether from murderous regimes or famines or pandemics. What we have been is devoted to the idea that we deserve to be. “The Haggadah’s purpose is not, in fact, to present a narrative,” Rabbi Mendel Herson, associate dean of the Rabbinical College of America, explained to me. “It’s a how-to guide to finding our own personal liberation.”

The text of the Haggadah is not a retelling of the liberation story itself but a record of agreements and disagreements among its interpreters, because it is not the God-driven part of the story that we should be focused on but the human-driven one. God will come to help when God comes to help; the question is what we do between now and then.

This is why Jews observed Passover in the basement “cantinas” of righteous friends during the Inquisition; they kept it during the Crusades, even as evil people around them used it to manufacture the deadly, and enduring, libel about matzo baked with the blood of Christian children; and they kept it throughout the Holocaust — in ghettos and concentration camps and forests.

As I write this, I am looking at a heart-stopping picture of five people baking matzo in 1943, in a secret oven they built beneath the Lodz ghetto. These were Jews made slaves again in modern times, insisting on celebrating their God-given right to freedom even as they were being denied their earthly equivalent. But what I really can’t get over is the smile on the face of one of the women. There it is, again, still: the joy and the sacrifice. It is the smile of someone who knows she is doing something miraculous by making Passover her own.

Our circumstances are much less dire than hers, but our task this year is the same. Last week, a group of major Orthodox rabbis in Israel announced that they would permit people to use Zoom videoconferencing for their Seders — a previously unimaginable accommodation to stringent Jewish law. But that’s the point. We may be away from loved ones, or shut out of communal spaces. We may not be preparing with the same vigor, or shopping with the same zeal. But we will do what millions of Jews have done before us: manifest our hope for liberation.

That is our obligation, and our privilege. All the more so in moments when the taste of freedom — from oppression, from want, from disease — is not yet ours.

Alana Newhouse is the editor in chief of Tablet magazine, which just published “The Passover Haggadah: An Ancient Story for Modern Times.”