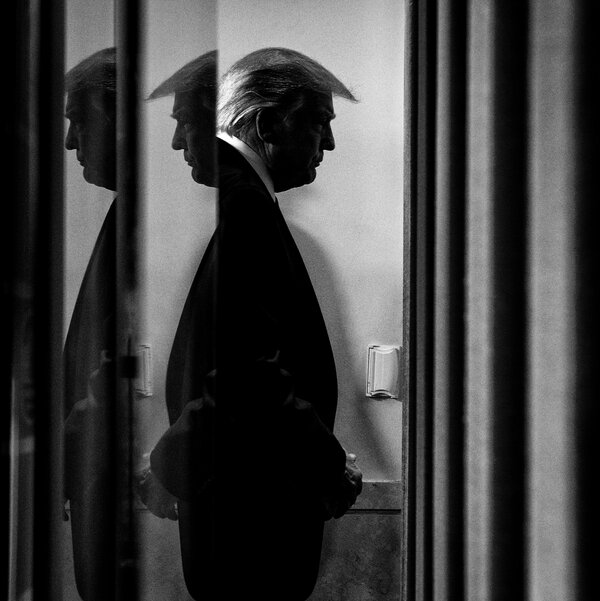 What’s the current state of the U.S. economy? A quick summary might be “booming with bottlenecks.”

And some of those bottlenecks reflect the mess created by Donald Trump’s trade policy.

Where we are now: Employment is growing at a rate we haven’t seen since 1984. So, probably, is gross domestic product, although we don’t yet have an official estimate for the second quarter. We are, however, suffering from shortages of many items, which are crimping production in some areas and leading to sharp price increases in others.

Some of these shortages are getting resolved. For example, two months ago, lumber cost almost four times as much as it did before the Covid-19 pandemic; since then, its price has fallen more than 50 percent. Other bottlenecks, however, seem more persistent. World trade is being held back by an inadequate supply of standard-size shipping containers — the ubiquitous boxes that carry almost everything, because they can be lifted directly from the decks of ships onto railroad cars and truck beds — and experts expect the shortage to last at least until late this year.

And there’s another bottleneck that may be an even bigger deal than the container shortage: a global shortage of semiconductor chips.

You see, these days almost everything contains silicon chips. So an insufficient supply of chips is a problem not just for producers of computers and smartphones; there are chips in just about all durable goods, including household appliances and, crucially, cars.

As a result, the chip shortage has had large and perhaps unexpected ramifications. Lack of chips is limiting production of automobiles, leading some people to buy used cars instead. And soaring used-car prices are a surprisingly big contributor to inflation — in fact, they accounted for about a third of May’s total rise in consumer prices.

So why are we facing a semiconductor shortage? Part of the answer is that the pandemic created a weird business cycle. People couldn’t go out to eat, so they remodeled their kitchens, and they couldn’t go to the gym, so they bought Pelotons. So demand for services is still depressed, while demand for goods has soared. And as I said, practically every physical good now has a chip in it.

But as Chad Bown of the Peterson Institute for International Economics documents in an important new article, the Trump administration’s trade policy made the situation much worse.

When Trump took us into a trade war with China, there was clearly a lot he and his advisers failed to understand about modern world trade. Among other things, they didn’t seem to grasp that modern trade consists not of simple exchanges of goods — they sell us cars, we sell them aircraft — but of complex supply chains, in which the production of a given item often involves activities spread across the globe.

Given this reality, the structure of the Trump tariffs was, well, stupid: They focused mainly on intermediate inputs like semiconductors and capital equipment, which American companies need to compete in the world market. As a result, multiple studies have found, the tariffs actually reduced U.S. manufacturing employment.

But Trump’s trade policy wasn’t just poorly conceived. It was also erratic. Nobody knew which products might face new tariffs or whether the tariffs he had imposed would remain in place. And in high technology, especially semiconductors, Trump began imposing export restrictions, again in an erratic fashion (and with an apparent lack of awareness that, in many cases, China could simply turn to other suppliers).

As I wrote at the time, the problem was less that Trump was a self-proclaimed Tariff Man than that he was a capricious, unpredictable Tariff Man. And this messed up business planning, especially in semiconductors.

Consider foreign producers selling into the U.S. market. Such producers had little incentive to add capacity, because for all they knew, they might suddenly face high tariffs. But U.S. producers also had little incentive to invest, because for all they knew, the tariff protection they were relying on might go away overnight — or they might abruptly find themselves barred from selling into foreign markets.

Basically, international supply chains don’t work very well when the policies of one of the world’s key economies are governed by the whims of a leader who gets his ideas from cable TV.

Notice that I’m not being a free-trade purist here. There’s a good case for interventionist government policy to ensure reliable supply chains — and the Biden administration is moving in that direction. It’s important, however, that this policy be designed by people who understand the issues and that the rules of the game be clear enough to let businesses plan.

In other words, we need a policymaking style that’s the opposite of what we had in the previous administration.

For what it’s worth, I don’t think bad policy is the main cause of the bottlenecks we’re experiencing, nor do I believe that these bottlenecks will prevent a rapid economic recovery. But Trump’s tantrum-based trade policy did real damage, and we’re still paying the price.