I grew up in the Southern Black church tradition, where Easter was the opportunity to don your best outfit. The yellow and red dresses and dark suits set against the Black and brown bodies of my church were a thing to behold. The hats of grandmothers and deacon’s wives jostled with one another for attention. The choir had its best music rehearsed and ready to go. Getting to sing the solo on Easter was like getting a prime spot at the Apollo.

I watched rather than participated in these festivities during most of my youth. I didn’t have the money or social standing to attract much attention. Then one year my mother cobbled together enough money to purchase a navy blue three-piece suit and a clip-on tie. Without my father around, neither she nor I could tie the real thing. I thought I had joined the elect when I showed up fresh and clean for Sunday service.

The feeling didn’t last long. During a song, a woman sitting next to me with one of the aforementioned hats got excited. Our tradition called it “catching the Holy Ghost.” In her ecstatic state, she kicked out, hit me in the leg, and ripped a hole in my brand-new pants.

That Sunday introduced me to the two Easters that struggle alongside each other. One is linked closely to the celebration of spring and the possibility of new beginnings. It is the show that can be church on Easter. The other deals with the disturbing prospect that God is present with us. His power breaks out and unsettles the world.

We like to imagine the story of the first Easter as the first of the two, a celebration of possibility. We would be wrong.

The four Gospels describe Jesus’ female followers going to his tomb on Easter morning, only to find it empty. They receive the news that Christ has risen from the dead. Each gospel, at different points, comments on the fear that these women felt.

The Gospel of Mark’s account is especially striking to me. The earliest and most reliable manuscripts of Mark conclude with a description of the women as “trembling and bewildered.” Mark tells us that they “fled from the tomb. They said nothing to anyone, because they were afraid” (Mark 16:8). That the story is known at all makes it clear that Mark believes the women eventually told Jesus’ disciples what they had seen. But what do we make of the fact that Mark ends his gospel on the women’s fear and silence?

Mark’s ending points to a truth that often gets lost in the celebration: Easter is a frightening prospect. For the women, the only thing more terrifying than a world with Jesus dead was one in which he was alive.

We know what to do with grief and despair. We have a place for it. We have rituals that surround it. I know how to look around at the anti-Black racism, the anti-Asian racism, the struggles of families at the border and feel despair. I know what it’s like to watch the body count rise after a mass shooting, only to have the country collectively shrug because we are too addicted to our guns and our violence.

I know how to feel when I look to some in the church for help, only to have my faith questioned because I see in biblical texts a version of social justice that I find compelling. I put it all in the tomb that contains my dead hopes and dreams for what the church and country could be. I am left with only tears. 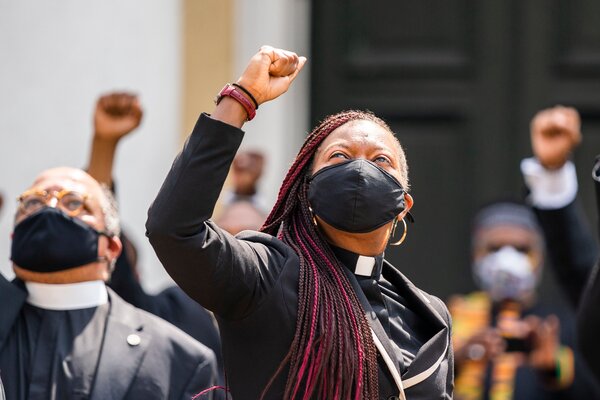 Hope is much harder to come by. The women did not go to the tomb looking for hope. They were searching for a place to grieve. They wanted to be left alone in despair. The terrifying prospect of Easter is that God called these women to return to the same world that crucified Jesus with a very dangerous gift: hope in the power of God, the unending reservoir of forgiveness and an abundance of love. It would make them seem like fools. Who could believe such a thing?

Christians, at their best, are the fools who dare believe in God’s power to call dead things to life. That is the testimony of the Black church. It is not that we have good music (we do) or excellent preaching (we do). The testimony of the Black church is that in times of deep crisis we somehow become more than our collective ability. We become a source of hope that did not originate in ourselves.

After we take off those suits and sundresses and hats, we return to a world that is racialized. The Black skin that set nicely against those yellows and blues also makes us stand out as we live in a world that calls our skin a danger. We need more than celebration; we need unsettling presence.

To listen to the plans of some, after the pandemic we are returning to a world of parties and rejoicing. This is true. Parties have their place. Let us not close all paths to happiness. But we are also returning to a world of hatred, cruelty, division and a thirst for power that was never quarantined. This period under pressure has freshly thrown into relief the fissures in the American experiment.

As we leave the tombs of quarantine, a return to normal would be a disaster unless we recognize that we are going back to a world desperately in need of healing. For me, the source of that healing is an empty tomb in Jerusalem. The work that Jesus left his followers to do includes showing compassion and forgiveness and contending for a just society. It involves the ever-present offer for all to begin again. The weight of this work fills me with a terrifying fear, especially in light of all those who have done great evil in his name. Who is worthy of such a task? Like the women, the scope of it leaves me too often with a stunned silence.