A year ago, the world read a record of a phone call in which President Trump pressured Ukraine’s government to provide dirt on his political rival, Joe Biden. The transcript of that call, along with other evidence, made clear the president and his associates asked officials in Kyiv to deliver on Mr. Trump’s political interests in exchange for American military aid needed to defend Ukraine. At the end of last year, the president was impeached for that abuse of power.

This was not a unique instance of Mr. Trump’s personal priorities corrupting American foreign policy. As the 2020 election grew closer, the president increasingly ignored the policies developed by his own government and instead pursued transactions guided by self-interest and instinct. The result is a patchwork of formal policies and informal deals that has undermined America’s interests and credibility. But Mr. Trump’s sloppy management matters less than its result: No one can trust American foreign policy right now.

Unfortunately, trust is the coin of the realm in national security. One of us, Lt. Col. Vindman, served in the military for more than two decades, including 19 months on Mr. Trump’s national security staff; the other, Mr. Gans, served at the Pentagon and wrote a book on how presidents from Harry Truman to Mr. Trump have made national security decisions. We know what it’s like to try to give advice and to be charged with carrying out policy. And we’ve both seen — in history and in recent years — what happens when decision-making becomes erratic and institutions break down.

Trust is why government officials have historically spent so much time around conference tables and in video teleconferences developing consistent, strategic policies. For a while, these practices continued under Mr. Trump. Career military officers, diplomats and members of the intelligence community worked with his political appointees to craft decisions and documents. But increasingly, the president and his loyalists in and out of government undermined this process with winks, nods and WhatsApp messages, seeking side transactions that prioritize personal benefit, break norms and invite corruption. 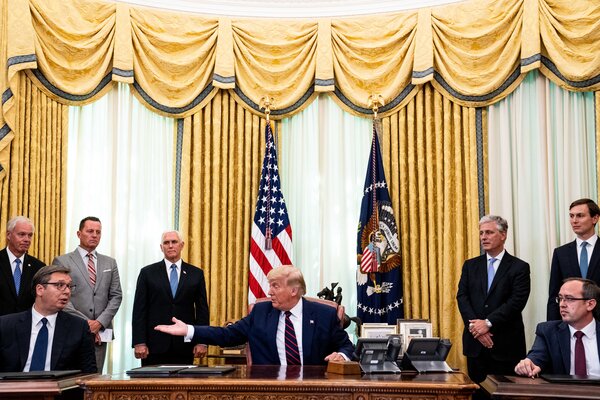 This is what happened with Ukraine. In March 2018, Mr. Trump issued an executive order that affirmed that it was the policy of the United States to stand by Ukraine and against any efforts that “threaten its peace, security, stability, sovereignty, and territorial integrity.” But when the president picked up the phone last July, he was not focused on the stated policy but on his own re-election. The deal Mr. Trump looked to close on the phone was the culmination of a scheme cooked up by Russian agents and Trump loyalists. The result: Too many in Washington and Kyiv were left trying to figure out what the United States policy was.

It’s not just Ukraine. On China, Mr. Trump undermined the pressure of his own so-called trade war by pleading with President Xi Jinping behind closed doors to purchase commodities in critical electoral districts. Remarkably, Mr. Trump admitted as much last month, saying, “China has been buying a lot of — a lot of things, and they’re doing it to keep me happy.” Mr. Trump’s freelance dealings with President Vladimir Putin of Russia, such as invitations back into the Group of 7 and for a visit to the White House, have compromised American and NATO responses to Russian aggression.

In the homestretch before the election, Mr. Trump has overridden many of the remaining safeguards against bad deals, and ignores his professional advisers even more often. He is pulling out all the stops to rack-up last-minute wins before the November election. The president’s deals — American interests be damned — appear to have become the point alone. Unsurprisingly, other nations have taken notice, and some have been opportunistic enough to extract concessions before granting Mr. Trump the photo ops he so desperately desires.

Earlier this month, Mr. Trump brought the Kosovar and Serbian presidents to the White House to normalize economic relations, a longtime objective on both sides of the Atlantic. Unfortunately, that was not the deal signed — a moment best captured when Mr. Trump surprised Serbia’s president, Aleksandar Vucic, with the news his country’s embassy was moving to Jerusalem (a move Mr. Vucic later walked back). Since that moment and before the ink dried, much of that deal has unraveled.

Mr. Trump also applied pressure to get the leaders of Israel, Bahrain and the United Arab Emirates to the White House for an agreement that many experts believe did little to realize the regional “comprehensive peace agreement” promised by the administration’s official National Security Strategy. Instead, the engagement offered little more than a photo opportunity to help Mr. Trump’s re-election and may have undermined future efforts to achieve lasting and meaningful results in the region.

Mr. Trump’s predecessors have also, on occasion, made decisions and deals that served their political interests. But those deals typically aligned with America’s stated policies and its interests. The problem is that too often Mr. Trump’s deals do not.

And that’s just the deals we know about: Few people have any real idea of what is being promised in other calls and meetings. We may never know. This inconsistent, incomplete and inscrutable patchwork of foreign policy is not just inefficient, it risks disastrous mistakes by the United States and miscalculation by allies and adversaries alike. It also provides a potential opportunity for the sort of ethical misconduct that worries many about the debts and dealings exposed in new reports about Mr. Trump’s taxes.

No one, not even Mr. Trump, can say with confidence what American foreign policy is on any given issue these days. Such uncertainty is a source of stress and friction, leaving American military personnel, diplomats and intelligence officers not only out of the loop but also out of step with each other and with allies. After almost four years of this uncertainty, foreign government representatives simply shortcut the system and look for a White House back channel to figure out if the United States will zig when it’s supposed to zag.

Even worse, the uncertainty means that Americans themselves cannot know, or trust, all the deals being made in their name. Although Mr. Trump will spend the remaining weeks of the campaign talking about some deals and denying others, the true extent of his corruption of American foreign policy will not be known for many years. As Americans go to the polls, they may not understand what each of Mr. Trump’s deals includes. But they should know how and why he’s making them.

If Mr. Trump manages to stay in the White House, he’ll believe he has a mandate for more of this kind of deal-making. Re-election will remove the last remaining guardrail against the corruption of American foreign policy and drive anyone who seeks to avert disaster underground or out of government. It’s impossible to predict the damage to America’s interests, power, credibility, relationships and reputation.

But there is one thing to trust: Over four more years, there is little Mr. Trump won’t deal away.