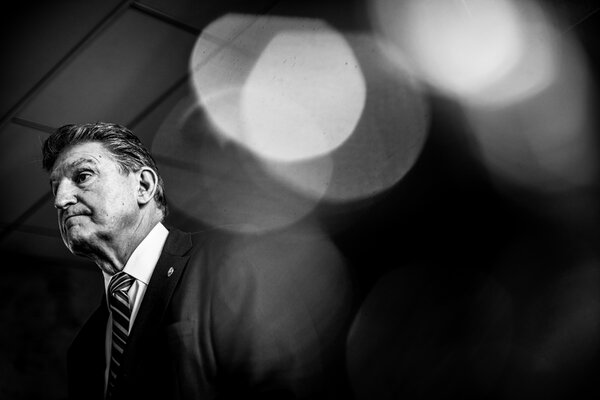 Dr. Stokes is an associate professor of political science at the University of California, Santa Barbara.

Over the last year and a half, I’ve dissected every remark I could find in the press from Senator Joe Manchin on climate change. With the fate of our planet hanging in the balance, his every utterance was of global significance. But his statements have been like a weather vane, blowing in every direction. It’s now clear that Mr. Manchin has wasted what little time this Congress had left to make real progress on the climate crisis.

Since early 2021, congressional Democrats and President Biden have worked relentlessly to negotiate a climate policy package. When Build Back Better passed the House last fall, it included $555 billion in clean energy and climate investments. After four decades of gridlock in Congress, the Democrats were poised to finally pass a major climate bill, with agreement from 49 Senators. But yesterday, one man torched the deal, and with it the climate: Mr. Manchin.

By stringing his colleagues along, Mr. Manchin didn’t just waste legislators’ time. He also delayed crucial regulations that would cut carbon pollution. Wary of upsetting the delicate negotiations, the Biden administration has held back on using the full force of its executive authority on climate over the past 18 months, likely in hopes of securing legislation first.

The stakes of delay could not be higher. Last summer, while the climate negotiations dragged on, record-breaking heat waves killed hundreds of Americans. Hurricanes, wildfires and floods pummeled the country from coast to coast. Over the last 10 years, the largest climate and weather disasters have cost Americans more than a trillion dollars — far more than the Democrats had hoped to spend to stop the climate crisis. With each year we delay, the climate impacts keep growing. We do not have another month, let alone another year or decade, to wait for Mr. Manchin to negotiate in good faith.

The climate investments in the bill ranged from incentives for clean power like wind and solar, to support for electric vehicles. They were essential to meeting President Biden’s goal of cutting carbon pollution in half from its 2005 levels by 2030 — the United States’ contribution to limiting global warming to 1.5 degrees Celsius. Congress’s failure to act means that, under the best case scenario with the policies we already have in place, we will only get 70 percent of the way there.

After months of stop-and-start discussions, with Mr. Manchin repeatedly walking away from the negotiations, Congress has largely run out of time. Democrats need to pass their reconciliation package this summer, and despite weeks of round-the-clock effort from Senator Chuck Schumer, the majority leader, and his team, Mr. Manchin has now refused to agree to vote for spending on climate. While he claimed on a West Virginia talk show on Friday that it wasn’t over, that “we’ve had good conversations, we’ve had good negotiations,” this is doublespeak; he simply doesn’t want to be held accountable for his actions. He has consistently said one thing and done another.

Mr. Manchin’s refusal to agree to climate investments will hurt the economy he claims he wants to protect. The package would have built domestic manufacturing, supporting more than 750,000 climate jobs annually. It would have also fought inflation, helping to make energy bills more affordable for everyday Americans. This is particularly ironic since Mr. Manchin said inflation was the chief reason he was uncomfortable with supporting tax incentives for clean energy right now.

Over the past year, Mr. Manchin has taken more money from the oil and gas industry than any other member of Congress — including every Republican — according to federal filings. A Times investigation found that he also personally profited from coal, making roughly $5 million between 2010 and 2020 — about three times more annually than his Senate salary. Coal has made Mr. Manchin a millionaire, even as it has poisoned the air his own constituents in West Virginia breathe.

As Upton Sinclair put it: “It is difficult to get a man to understand something, when his salary depends on his not understanding it.”

But one thing I have never understood about Mr. Manchin is how he looks his grandchildren in the eye. While he may leave his descendants plenty of money, they will also inherit a broken planet. Like other young people, Mr. Manchin’s grandchildren will grow up knowing that his legacy is climate destruction.