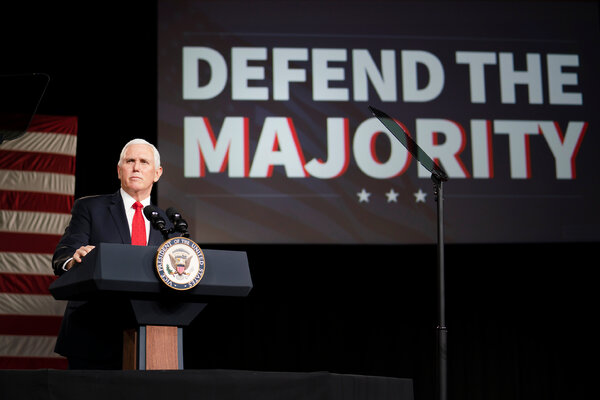 When Congress tallies the presidential electors’ votes on Wednesday, Vice President Mike Pence’s role is purely ministerial. The electors have spoken, and President Trump and Mr. Pence lost — decisively, I might add.

He has one job, therefore: to announce that Joe Biden and Kamala Harris were elected. Some Republicans disagree, however, and think he has discretion as presiding officer.

Let’s assume for a nanosecond that they’re right. If so, Mr. Pence should rule the G.O.P. objections to Mr. Biden’s victory out of order as having absolutely no merit. It would spare the House and the Senate from “debating” the election, and our country the embarrassment of this pernicious folly.

Trump’s Picks for Medals, and the Real Heroes

Re “Trump Awards Nation’s Highest Civilian Honors to One of His Most Devoted Defenders” (Live Briefing, nytimes.com, Jan. 5), about the awarding of the Presidential Medal of Freedom to Representative Devin Nunes and plans to award one to Representative Jim Jordan:

In my opinion, the person who deserves the Presidential Medal of Freedom is Georgia’s secretary of state, Brad Raffensperger. He has shown more courage and commitment to our democratic system of government than many others who cower before President Trump’s bullying and tweeting. Mr. Raffensperger is truly a national hero.

Linda Greenhouse’s recollection of the many days spent by Senator Joseph Biden preparing for the hearings about the nomination of Robert Bork for the Supreme Court is consistent with my own. I was one of the people who briefed the senator about issues likely to come before the court — in my case, issues relating to the First Amendment.

As Ms. Greenhouse aptly recalls, Senator Biden had generally received skeptical press coverage. But his preparation for the hearings that would follow — including a close reading of the memorandum I had prepared for him — left me reassured not just about his general ability but also about his willingness to do the intensive work required to address issues that he had had no reason to have closely studied before.

He ultimately decided to focus his questioning of Judge Bork with particular intensity on the issue of privacy rather than on the First Amendment or any other area of law. But his preparation for the hearings left me with a sense of confidence about him that I still have.

Floyd Abrams
New York
The writer is a constitutional lawyer.

It seems to me that it’s time to return to a discussion of term limits for members of Congress. It may be the only solution to the inability of politicians to overcome their own self-interest and do what is best for the country and our democratic system of government.

Books are indeed a lovely escape from Zoom. After a long day of teaching secondary school history on Zoom, in person or a combination, I am happy to retreat to Alexandre Dumas’s “Count of Monte Cristo,” having already finished, since June, two volumes by the Brontë sisters, some Dickens and “Dracula,” all classics that I should have read but never did in high school or college.

As much as I am happy to have the break from being online, I have delved into these literary masterpieces with my nephew, a senior in high school. Every week, we meet, despite our being on opposite coasts, to discuss the works we’ve chosen together. He keeps me honest, and I must read the 100 pages per week so I am prepared for the weekly salons that are an enduring bright spot in an otherwise bleak time.

Indeed, reading with him is the best of times, and I am grateful to the independent booksellers who keep us plied with endless choices.