Good morning. We offer our latest report card on the virus — and a wrap-up of the impeachment trial’s second day. 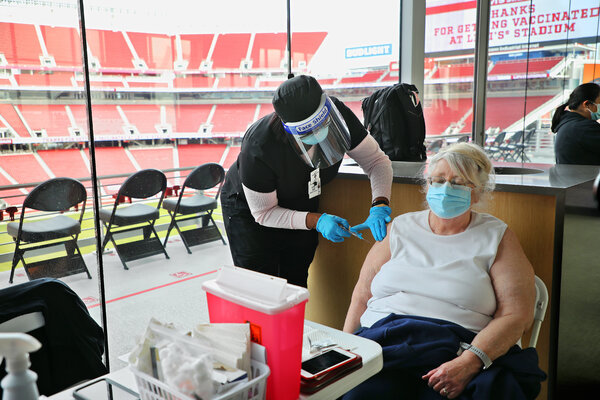 The number of new coronavirus cases continues to plummet, as does the number of Americans hospitalized with symptoms. Deaths have also begun to decline. And the number of daily vaccination shots has nearly tripled over the last month.

It’s been a long time since the virus news was as encouraging as it is right now.

The overall situation is still bad. The virus is spreading more rapidly in the U.S. than in almost any other large country, and more than 2,500 Americans are dying daily. Newly contagious variants may create future outbreaks. For now, though, things are getting better — and a combination of vaccinations, mask wearing and social distancing has the potential to sustain the recent progress.

Here is The Morning’s latest virus report card, with help from five charts — and with an emphasis on what will shape the next few weeks.

The drop is real

The recent decline in new virus cases is larger than any of last year’s declines:

Since reaching a peak on Jan. 8 — related to holiday gatherings — the number of confirmed new daily cases has fallen by almost 60 percent. The decline in actual cases is probably somewhat smaller, because the volume of testing has also fallen over the last few weeks. Fewer tests lead to fewer reported cases.

But most of the decline in the chart above is real. We know that because the percentage of tests that came back positive has also dropped sharply (to 7 percent, from 14 percent on Jan. 8). The number of people hospitalized with Covid-19 symptoms is falling, too:

Most important, deaths have begun to decline:

And deaths are likely to decline more. The fatality trends typically trail behind the trends in diagnosed cases by about three weeks — which means the sharp recent drop in cases is only now starting to affect the death numbers. Over the next two weeks, the number of daily deaths will probably fall below 2,000, Dr. Ashish Jha, dean of the Brown University School of Public Health, predicts, and it could drop below 1,000 by next month.

The main cause of the decline appears to be that a significant share of people now have at least some immunity to the virus. That also helps explain the global decline in newly diagnosed cases:

In the U.S., about 110 million people have likely had the virus (including unconfirmed cases), researchers say. Another 33 million have received at least one vaccine shot.

Combined, these two groups make up about 43 percent of all Americans, which appears to be enough to slow the spread. “Though it is difficult to know for sure,” Andrew Brouwer, a University of Michigan epidemiologist, told The Wall Street Journal, “we may be approaching herd protection.”

Still, this protection does not ensure a continuing decline in cases. Most Americans still haven’t had the virus.

Will we become complacent?

The first thing to watch in coming days is whether Super Bowl parties turned into superspreader events that have caused new outbreaks.

The next question will be whether the recent decline causes Americans to become lax again, as happened both last summer and fall. New York, Massachusetts and other states have begun lifting some restrictions, and many public experts are worried that politicians will go too far in this direction. Doing so in coming weeks would be especially dangerous because of the growing spread of more contagious virus variants.

“These contagious new variants really heighten the risk,” Apoorva Mandavilli, a Times science reporter, told me. “The good news is that we know what to do: Wear a mask or maybe two, stay as far from others as you can, meet people only outside or at least open the windows, and wash your hands often.” Failing to follow this advice could be more damaging with the variants than with the original version of the virus.

Adding to the risk is the possibility that some people who have already had the virus remain vulnerable to reinfection from one of the variants. If that turns out to be the case — as early research suggests — vaccination will become even more important.

The U.S. vaccination campaign got off to a bad start. The Trump administration vowed to give shots to 20 million people by the end of 2020 — and reached fewer than three million. But the pace sped up in the administration’s final weeks, and the Biden administration has further accelerated it:

The bottom line: The pandemic is in retreat. What happens next will depend mostly on three factors: 1) how many Americans wear masks and remain socially distant; 2) how contagious the new variants are; and 3) how quickly the vaccines — which have virtually eliminated the worst Covid symptoms — get into people’s arms.

The C.D.C. urged Americans to wear tightly fitted masks and said that surgical masks had the best chance of preventing infection.

“Seeing them all strung together chronologically is striking,” The Times’s Lisa Lerer noted. “And that’s a big part of the Democratic strategy.”

The managers showed previously unseen security footage in which rioters came close to lawmakers. At one point, a police officer gets Mitt Romney to run away from the mob.

“That was a mob sent by the president of the United States to stop the certification of an election,” Stacey Plaskett, a member of the House team, told the Senate.

Saudi Arabia released the women’s rights activist Loujain al-Hathloul from prison. The kingdom’s rulers are looking to set a new tone with Biden, who has vowed to reassess the U.S. relationship with the kingdom.

Researchers said they found a drug to be so effective against obesity that it reduced diabetes and other diseases.

The Coast Guard rescued three people from an island in the Bahamas, where they had survived for 33 days, eating coconuts, conchs and rats.

A Morning Read: As states debate reopening schools, one city district that kept students in classrooms shows it can work — mostly.

From Opinion: Aliens are almost certainly out there. Let’s look for them, Farhad Manjoo says.

Lives Lived: Though an injury derailed her career before she could reach the Olympics, Dianne Durham became a trailblazer among Black gymnasts by winning the 1983 national championship. She died at 52.

Larry Flynt, the pornographer and self-promoting free-speech champion, was a ninth-grade dropout who built an empire of publications, strip clubs and “adult” shops around his sexually explicit magazine Hustler. Flynt died at 78.

Why hasn’t Amazon won at gaming?

Amazon dominates retail and is a growing force in streaming. But there is one big industry where its efforts have repeatedly failed: video games. Despite about a decade of investments, the company hasn’t made a single hit game, as both Wired magazine and Bloomberg News have recently documented.

Among the possible reasons: Amazon’s bureaucratic, data-driven approach hinders the creativity that game development requires. The original head of Amazon Game Studios was an executive who had never made a video game. (By contrast, the head of Amazon Studios, Jennifer Salke, had spent seven years at NBC.)

So far, Amazon’s one significant success in the gaming space was its 2014 acquisition of Twitch, a popular livestreaming platform that also offers a powerful marketing channel for Amazon products.

Still, the company’s efforts are a warning to other tech businesses keen on the gaming market. “Successful video games are a combination of art, entertainment, technology and very large budgets,” Jason Schreier and Priya Anand write in Bloomberg. “Big tech companies only really figured out the last two.”

This mushroom tart is made with a quick puff pastry. (For more on making restaurant-worthy spread at home, check out David Tanis’s suggested menu.)

Patricia Lockwood follows up on her memoir “Priestdaddy” with “No One Is Talking About This,” a novel that explores the chaos of the internet and the pain of personal loss.

The late-night hosts got serious.

The pangram from yesterday’s Spelling Bee was clawing. Here is today’s puzzle — or you can play online.

P.S. Jia Lynn Yang, a deputy National editor at The Times who previously covered business, politics and national security at The Washington Post, will become The Times’s next National editor.

Today’s episode of “The Daily” is about accusations of abuse against the head of a network of homeless shelters. On the latest “Sway,” Fran Lebowitz discusses her resistance to technology.