Home » Analysis & Comment » The Cost of a Stuck Ship

After almost a week of dredging, drigging and tugging — and with some help from the moon — salvage teams yesterday freed the giant container ship that had been stuck in the Suez Canal, one of the world’s most important shipping lanes.

As a result, traffic has resumed for the hundreds of ships waiting on both ends of the canal. And while estimates have varied wildly, the delay is also expensive. “The disruption has caused the canal authorities in Egypt losses of $95 million in revenue,” The Times’s Peter Goodman told me.

And even though the ship is free, the disruption isn’t over.

“It’s not just like flipping a switch,” Vivian Yee, the Times’s Cairo bureau chief, told me. Now that the ship is out of the way, the backlog will take at least a few days, maybe even weeks, to resolve.

High winds from a sandstorm caused the ship, the Ever Given, to turn sideways in the canal and get stuck, its operators said. But shipping experts have suggested that while the wind probably had a role in the crisis, human error might have, too.

Last year, almost 19,000 ships traveled through the canal without an accident, according to the chief of the Suez Canal Authority, the Egyptian agency that operates the waterway. And high winds aren’t unusual in the area. “We’ve seen worse winds,” Ahmad al-Sayed, a security guard, told The Times, “but nothing like that ever happened before.”

The crews working to dig out the ship were largely dependent on forces beyond their control: the moon and the tides. The full moon on Sunday offered a few extra inches of tidal flow and gave workers the boost they needed to set the ship free.

Not a normal ship

It’s rare that a maritime disruption makes international news. But this was not your average mishap. For one, the Suez Canal isn’t like other waterways. “It is a vital channel linking the factories of Asia to the affluent customers of Europe, as well as a major conduit for oil,” Peter writes.

And the Ever Given is one of the world’s biggest container ships. “From a distance, it’s hard to comprehend how big it is,” Vivian told us. “From land, all the containers on top look like Legos — and then you realize each one of those Legos is 20 or 40 feet long.” 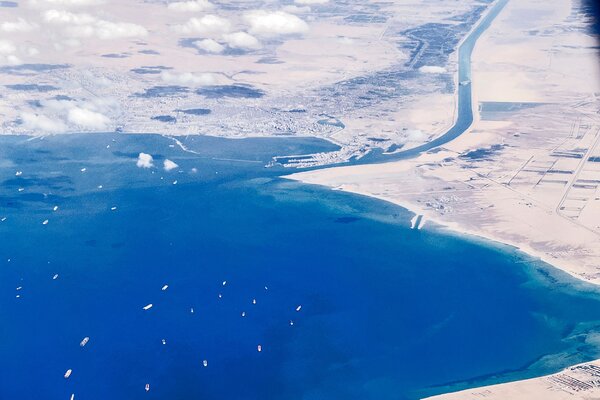 In addition to shipping delays, the traffic jam has also affected manufacturing. There are a finite amount of big containers in the world, and many of them have been stuck at sea — creating a backlog of goods sitting in factories, waiting to be put in boxes, Vivian says.

The crisis highlights a vulnerability of our interconnected world, Peter told us: “We have built a global distribution network that relies on goods getting where they are needed just as they are needed, with little margin for error.”

The history: It took 10 years of hard labor — during which tens of thousands of Egyptian workers died — to build the canal in the 19th century.

For more: This is how giant container ships are built.

Dr. Rochelle Walensky, the director of the C.D.C., said she was worried the uptick in infections could turn into a fourth wave and implored Americans to “hold on a little while longer.”

The Moderna and Pfizer coronavirus vaccines are proving highly effective in real-world conditions: The shots prevent 90 percent of infections after two doses, the C.D.C. found.

Texas and five other states have begun providing vaccines to everyone 16 or older, regardless of health conditions. New York will expand eligibility to all adults next week.

New York must offer vaccines to all incarcerated people, a judge ruled.

A joint inquiry by the World Health Organization and China revealed no new insights into how the pandemic began, and it wasn’t clear whether Beijing would allow outside experts to investigate further. “We may never find the true origins,” an expert said.

The Death of George Floyd

The trial of Derek Chauvin, the former Minneapolis police officer charged in the killing of George Floyd, began yesterday.

The prosecution argued that Chauvin acted with excessive force, and played a video that showed him kneeling on Floyd’s neck for more than nine minutes. “You can believe your eyes that it’s homicide,” a prosecutor told the jury.

The defense argued that Floyd’s death was caused by underlying medical conditions and a drug overdose, and urged jurors to consider evidence beyond the video.

This two-minute video shows key moments from the first day of the trial.

A man attacked a 65-year-old woman on a Manhattan sidewalk yesterday in an anti-Asian hate crime. The victim is in the hospital, and the police are searching for the attacker.

Federal prosecutors charged Ghislaine Maxwell with sex trafficking of a minor, accusing her of grooming a 14-year-old girl to engage in sexual acts with Jeffrey Epstein.

The Biden administration plans to expand offshore wind turbines along the East Coast, aiming to generate enough energy to power 10 million homes by 2030.

The Houston Cougars advanced to the national semifinals of the N.C.A.A.’s men’s basketball tournament for the first time since 1984. In the women’s tournament, UConn snuck past Baylor to make it to the Final Four.

After the Jan. 6 attack on the Capitol, does the U.S. need a domestic terrorism law?

No: “The problem is not lack of laws. It is a lack of will” to pursue extremists using existing law, the A.C.L.U.’s Hina Shamsi argues. And some progressives fear that the government could exploit the law to limit Americans’ rights or target minority communities, Vox’s Nicole Narea explains.

Makeover: The beauty industry has entered a phase of total pop-culture domination. Celebrities, social media stars and lifestyle influencers are changing the way the sell works.

Lives Lived: A fierce advocate for New York’s disabled, Edith Prentiss fought to make the city she loved more navigable for everyone. She died at 69.

Chinese restaurants have suffered more during the pandemic than most other U.S. restaurants.

Their business began declining sooner — in January of last year, when news broke that a new virus was circulating in Wuhan, China. The restaurants have also had to cope with a rise in anti-Asian racism — “vandalized, robbed, attacked online in racist Yelp reviews,” as The Washington Post reported. Xi’an Famous Foods in New York began closing early after two employees were punched in the face while commuting to and from work.

Grace Young, a decorated author of cookbooks, is worried that traditional Chinatowns, like New York’s and San Francisco’s, will never recover from the pandemic, and she has spent months trying to call attention to the problem. “When you step into those restaurants, you are stepping back in time, and it’s a privilege,” Young said on a recent episode of “The Splendid Table,” a food podcast.

For anyone who wants to help Chinese restaurants, Francis Lam, the host of “The Splendid Table,” offered a suggestion: “If you can, order yourself some Chinese takeout. Get extra. Leftovers are your friend.” In The Times, Bonnie Tsui has more tips for supporting restaurants. — David Leonhardt

Umami-rich seaweed takes creamy asparagus pasta to the next level.

Young artists are bypassing art schools and student loans, quitting their day jobs and pursuing careers as full-time artists on TikTok. But what happens when viewership plummets and copycats arrive?

The pangram from yesterday’s Spelling Bee was untucked. Here is today’s puzzle — or you can play online.

Thanks for spending part of your morning with The Times. See you tomorrow. — Claire

P.S. Send us a question for the News Quiz! Submit a suggestion before noon Eastern tomorrow, and we may feature it in this week’s quiz.

Today’s episode of “The Daily” is about Georgia’s election law. On “The Ezra Klein Show,” Ted Chiang discusses science fiction, technology and superheroes.

Ian Prasad Philbrick, Tom Wright-Piersanti and Sanam Yar contributed to The Morning. You can reach the team at [email protected].