By Carole Landry and Dani Blum

We’re covering moves by Hong Kong’s pro-Beijing lawmakers to assert their dominance, the investigation of Melbourne’s lockdown in high-immigrant areas and a golden statue of a dog loved by Turkmenistan’s president. 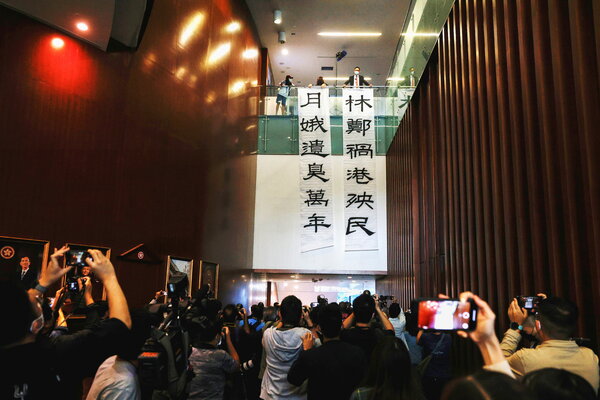 After the mass resignation of pro-democracy lawmakers in Hong Kong’s legislature, pro-Beijing legislators quickly announced that they would make full use of their new dominance to advance a slew of priorities that otherwise would have met fierce resistance.

Regina Ip, a pro-Beijing lawmaker, said that she looked forward to expanding voting rights in city elections to Hong Kongers who live in mainland China and to promoting changes to the high school curriculum, which many establishment figures blame for turning young people against the government.

Some politicians seemed almost gleeful. Carrie Lam, Hong Kong’s chief executive, said that the government felt “all the more excited” that its bills could be passed efficiently. The Legislative Council had been one of the last bastions of formalized, legal dissent in the city.

How we got here: Here’s a look at key moments in the showdown between pro-democratic forces and the Beijing-backed authorities who have chipped away at Hong Kong’s freedoms, including the move that prompted the mass resignation: the ejection of four pro-democracy lawmakers from the legislature on Wednesday after Beijing gave the Hong Kong authorities broad power to remove those deemed insufficiently loyal to China.

What’s next: The developments have left the opposition in Hong Kong almost totally gutted, our correspondents write. It is unclear what avenues of resistance remain, as Beijing exerts ever more control over the Chinese territory.

The ombudsman in Victoria is conducting an investigation into a strict lockdown placed on nine public housing towers in Melbourne. Many of the towers’ residents are immigrants who say the restrictions felt like discrimination.

When the lockdown was imposed in July, most people in Melbourne were able to leave home to exercise and shop for necessities, but those living in the towers were effectively placed under house arrest for 14 days — without warning.

In late October, most of Melbourne celebrated the end of one of the longest and strictest lockdowns in the world. But the residents of the towers are struggling to work through feelings of anger, trauma and confusion.

Details: Local authorities said the buildings had “explosive potential” because of their population density. But the actual concentration of infections within the towers was not out of line with rates in other parts of Melbourne.

New York’s mayor is on the brink of shutting down all classrooms across the school system, by far the nation’s largest, as the city confronts a second wave.

Britain became the first European country to surpass 50,000 virus deaths. Prime Minister Boris Johnson said that the milestone showed the country was “not out of the woods.”

Hungary is getting ready to bring an unproven Russian vaccine to its citizens. Foreign Minister Peter Szijjarto, who is in quarantine after testing positive for the virus, said Wednesday that the Hungarian authorities were preparing a temporary six-month import permit for Russia’s Sputnik V vaccine for tests and trials.

Afghans weigh their prospects in a Biden presidency

After 19 years and three U.S. presidents, it’s President-elect Joe Biden’s turn to inherit the war in Afghanistan. Mr. Biden has agreed with President Trump that it’s time for U.S. troops to return home. For Afghans, the question is how fast.

American commanders have warned that it is vital to keep withdrawal contingent on the Taliban’s keeping pledges to negotiate an end to the war.

Calls for action: Afghan officials are publicly urging Mr. Biden to better support the stalled peace talks in Qatar. On Monday, Afghanistan’s second vice president, Sarwar Danesh, called on the incoming Biden administration to conduct a review of the Afghan peace process and to put more pressure on the Taliban to negotiate fairly.

If you have 6 minutes, this is worth it

President Trump’s refusal to accept the results of the U.S. election places him in the company of autocrats and dictators across the globe, many of whom the U.S. has condemned in the past.

Aleksandr Lukashenko of Belarus, Robert Mugabe of Zimbabwe and Nicolás Maduro of Venezuela — all have used some of the tactics Mr. Trump has employed: claiming voter fraud, undermining confidence in democratic institutions, vilifying opponents and attacking the press. After decades of “preaching democracy to everyone else,” said a cartoonist and political commentator in Kenya, the United States has been exposed as “drinking wine and preaching water.”

Sinai helicopter crash: Six Americans, a French citizen and a Czech national, all members of a peacekeeping force, were killed in a crash on Thursday near Sharm el Sheikh in the Sinai Peninsula of Egypt. The peacekeeping force, Multinational Force and Observers, which supervises the 1979 Israel-Egypt peace treaty, said there was nothing to suggest the crash was anything other than an accident.

Measles deaths: A report released Thursday said that deaths worldwide from the vaccine-preventable disease had swelled last year to their highest level in 23 years. Health experts fear a further increase as the pandemic continues to disrupt immunization and detection efforts.

Netherlands attack: At least one gunman opened fire outside the Saudi Embassy in The Hague on Thursday, a day after a World War I commemoration attended by European officials was attacked in Saudi Arabia. No one was injured in the latest attack, and it was not immediately clear whether it was related to the violence in Saudi Arabia.

Blackpink controversy: The K-pop girl band was accused of putting a panda cub at risk after they were seen cuddling him in a video clip. Commentators were aghast that members of the group were wearing makeup while touching the panda and did not wear gloves.

Harley-Davidson in India: The proudly American company is giving up on India because of weak sales, after more than a decade of pursuing a huge but ultimately frustrating place to do business.

Snapshot: Above, a recently unveiled golden sculpture in Ashgabat, the capital of Turkmenistan, honoring President Gurbanguly Berdymukhammedov’s favorite dog breed, the Central Asian shepherd. The opulent monument stands in stark contrast with the everyday lives of many in a country that remains impoverished.

Cook: In this beef and cabbage stir-fry, coarsely crushed black peppercorns add a spicy bite to the meat, balanced by a simple rub of garlic, brown sugar and salt.

Watch: Henry Golding stars in “Monsoon,” an intimate drama about a man returning to the Vietnam of his childhood.

Do: Reflect on past vacations — and daydream about future ones — with this list of treasured hotels from across the world.

The weekend is almost here. At Home has ideas on what to read, cook, watch, and do while staying safe at home.

Coral Davenport, who has covered climate change policy in the U.S. over three administrations, wrote about the profound impact that President Trump has had in hobbling the fight against global warming. Here’s an excerpt from what she wrote in our Climate Fwd: newsletter.

Washington is poised for another 180 on climate change. Having covered climate change policy since the George W. Bush administration, though, I’m used to whiplash.

Mr. Bush withdrew the United States from the Kyoto Protocol, the world’s first global climate treaty. Then his successor, Barack Obama, spent his two terms assuring the world that the United States was back, and ultimately helped to forge a new global climate accord in Paris. President Trump followed, pulling out of the Paris agreement and reversing many of Mr. Obama’s environmental protections. Now, President-elect Joe Biden says he’ll recommit to the Paris accord on Inauguration Day.

My colleague Lisa Friedman and I have spent the last three and a half years writing a string of what she calls “obituaries for Obama climate rules.” Lisa and I expect to spend much of 2021 covering the rollbacks of the rollbacks.

There have always been pendulum swings of Washington, of course. But this isn’t just politics as usual.

The nature of greenhouse gas pollution is that it’s cumulative, so the heat-trapping gases emitted as a result of the regulations Mr. Trump loosened or removed will remain for decades, regardless of changes in policy under Mr. Biden.

That’s it for this briefing. See you next time.

Thank you
To Theodore Kim and Jahaan Singh for the break from the news. You can reach the team at [email protected]

P.S.
• We’re listening to “The Daily.” Our latest episode is about the race to develop a coronavirus vaccine.
• Here’s our Mini Crossword, and a clue: 180° from NNW (three letters). You can find all our puzzles here.
• “The Decameron Project,” a collection of short stories about the pandemic commissioned by our magazine, is now out as a hardcover book.