Fighting in the Caucasus continues, despite a cease-fire.

We’re covering the growing threat of pandemic fatigue, continuing fighting in the Caucasus and a special section from The Times’s editorial board on Donald Trump. 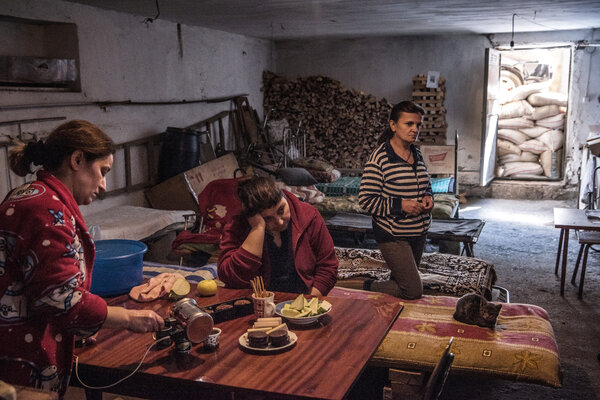 Death and despair in Nagorno-Karabakh

Three weeks of fighting over Nagorno-Karabakh, an ethnic Armenian enclave that is part of Azerbaijan under international law, has settled into a brutal war of attrition.

Azerbaijan has deployed firepower superior to Armenia’s, using advanced drones and artillery systems that it buys from Israel, Turkey and Russia. But it has failed to convert that advantage into broad territorial gains, indicating more conflict to come.

Our reporter spent four days in Stepanakert, the capital of Nagorno-Karabakh, with a photographer. “I won’t say that we are not afraid,” an Armenian fighter told him. “We are all afraid.”

Finding safety: Officials say that more than half of the people of Nagorno-Karabakh have fled their homes. Civilians who have stayed behind live in their basements, converted in recent weeks with makeshift kitchens.

The latest: Armenia and Azerbaijan on Sunday traded blame for the failure of a new cease-fire mediated by France. Fighting continued after the truce went into effect at midnight on Saturday.

The high costs of pandemic fatigue

In parts of the world where the coronavirus is surging again, outbreaks have collided with a growing sense of apathy, a dangerous combination that could worsen what health officials fear could be a devastating new wave.

Despite rising cases in Europe, new restrictions have been met with public weariness and a tendency to risk the dangers of the coronavirus, out of desire or necessity: With no end in sight, many people are socializing much as they did before the virus hit. Others must return to school or work as communities seek to resuscitate economies.

And in sharp contrast to the spring, the rituals of hope and unity — teddy bears in windows or applause for health workers — that helped people endure the first surge of the virus have given way to exhaustion and frustration.

Quote: “Citizens have made huge sacrifices,” said Dr. Hans Kluge, the World Health Organization’s regional director for Europe. “It has come at an extraordinary cost, which has exhausted all of us, regardless of where we live, or what we do.”

More than 70,450 new coronavirus cases were reported in the U.S. on Friday, the highest figure since July 24, according to a Times database, and the global seven-day average of new cases is hovering near 350,000.

A person living in the same residence as Pope Francis has tested positive for the virus, adding to concerns about the pope’s safety raised by an outbreak among the Swiss Guards, the uniformed force that protects him.

Both the Austrian and Belgian foreign ministers have tested positive for the coronavirus, raising the possibility that they might have caught it at a meeting with European Union counterparts in Luxembourg on Monday.

Britain’s space agency has backed an innovative medical drone delivery service that aims to carry coronavirus test samples, testing kits and personal equipment to hospitals and other sites of the country’s National Health Service, the authorities said on Saturday.

Vox, an ultranationalist party in Madrid, is working to remove memorials to Spanish Socialist figures of the 1930s, calling the effort a warning that a “law of historical memory” should be abolished.

The “law of historical memory” was enacted in 2007 with the aim of condemning the Franco regime and forbidding the exaltation of leaders or symbols related to the military coup and the Spanish Civil War. The Spanish government used the same law last year to exhume Franco’s remains from a basilica that he built outside Madrid.

Now, despite denouncing those efforts, their political opponents are trying to use the same law to persuade the authorities in Madrid to erase memorials to Franco’s Socialist rivals.

Official remarks: Prime Minister Pedro Sánchez responded on Twitter that the warnings from Vox were “unacceptable.” He added: “Let us continue building a Spain worthy of those who fought so we could be what we are now: free.”

If you have some time, this is worth it

The meaning — and majesty — of a mustache

Like so many men seeking novelty in the months of isolation, Wesley Morris, a critic at large for The Times, grew a mustache. But what started as a quarantine facial-hair experiment led him instead to a deep consideration of his Blackness.

Among many predictable responses, one stood out. “You look like a lawyer for the N.A.A.C.P. Legal Defense Fund!” a friend told him.

“Where someone might have sensed shade being thrown, I experienced the opposite,” Wesley writes. “It was said as a winking correction and an earnest clarification. Y’all, this is what it is. The call moved on, but I didn’t. That is what it is: one of the sweetest, truest things anybody had said about me in a long time.”

France beheading: The suspect in the beheading of a history teacher in a Paris suburb, who was fatally shot by the police shortly after the attack on Friday, was an 18-year-old refugee of Chechen descent who had been angered by a classroom display of caricatures of the Prophet Muhammad.

Jacinda Ardern: New Zealand’s prime minister and her Labour Party coasted to victory in national elections, riding a wave of support for her response to the coronavirus. Ms. Ardern has now cemented her position as New Zealand’s most popular prime minister in generations, if not ever.

Protests in Thailand: In the latest of months of demonstrations, tens of thousands of pro-democracy protesters gathered in Bangkok and in about 20 provinces over the weekend to call for fresh elections, a new Constitution and reforms of the monarchy.

Snapshot: Voters in El Alto, Bolivia’s second largest city, on Sunday. The election is viewed as a referendum on the political project of former President Evo Morales, who fled the country last year. Mr. Morales lifted many out of poverty, but his policies and tone divided the country.

Lives Lived: Ruth Kluger, whose haunting, unforgiving memoir “Still Alive: A Holocaust Girlhood Remembered” recalled her experience of growing up Jewish in Nazi-occupied Vienna and escaping death in a concentration camp, died at 88 earlier this month.

What we’re reading: In a departure from our usual selection of material from outside The Times, today we’re highlighting a special section about the coming presidential election, titled “The Case Against Donald Trump.” It was published by The Times’s editorial board, which operates independently of the newsroom.

Cook: Lamb, harissa and almond sausage rolls are a sassy twist on a classic sausage roll with North African flavors.

Do: Backyard birding has become the perfect pandemic pastime. Here’s how to draw more species to your yard, and maybe get a good photo, too.

Look to our At Home collection for ideas on what to read, cook, watch and do while staying safe at home.

The writer Hillary Richard wrote about a wellness practice that is helping some people cope during the pandemic: Eating breakfast in complete silence. Here’s an excerpt.

The concept for silent breakfast is simple enough: focus on your food, quietly, and deal with whatever thoughts come up. But it’s more difficult than it seems.

My parents were both entrepreneurial people who successfully worked their ways out of underprivileged childhoods. They instilled a very tough work ethic into me. “Self-care,” I believed, was for people who had the time and money. Not working hard enough meant risking failure.

But here I was, at my first wellness retreat, trying to appreciate a bowl of berries and tail-spinning into existential dread. It felt indulgent and lazy to focus so intently on my food. I had a to-do list a mile long and a new mortgage to worry about. I was deeply uncomfortable.

I couldn’t concentrate, so I let my mind run wild through its litany of worries and reminders. Then, like a toddler wearing herself out after a tantrum, my thoughts quieted down.

After several days of silent breakfast, I started to hear myself. My concerns and thoughts, happy with their time at the soapbox, stepped back and stopped plaguing me first thing in the morning. I could focus on what was in front of me, without guilt, without obligation, without stress. It was an unusual feeling of freedom.

That’s it for today’s briefing. Wishing you a great start to the week.

Thank you
To Melissa Clark for the recipe, and Theodore Kim and Jahaan Singh for the rest of the break from the news. You can reach the team at [email protected]

P.S.
• We’re listening to “The Daily.” Our latest episode is the second of a two-part series on the policies of President Trump and his challenger, Joe Biden.
• Here’s our Mini Crossword, and a clue: “Food tossed to ducks” (five letters). You can find all our puzzles here.
• Using pastels and paint, the artist and designer Sho Shibuya transforms front pages of The New York Times into often topical works of art.
• Michael Cooper, our classical music and dance reporter, will be our new deputy editor for Culture in charge of news coverage, and Nicole Herrington, Culture’s weekend editor, will be taking over as theater editor.