We’re covering a visit to Afghanistan by President Biden’s defense secretary and India’s race to contain a second wave of the coronavirus. 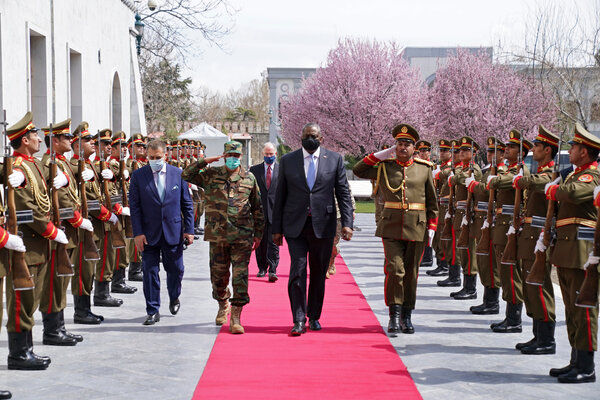 A U.S. visit to Afghanistan

Defense Secretary Lloyd Austin landed in Kabul on Sunday morning, becoming the first member of President Biden’s cabinet to set foot in the country, which is home to America’s longest war.

The trip comes at a pivotal time: The U.S. is tentatively set to withdraw its forces from the country on May 1. Mr. Biden said in an interview last week that meeting the deadline would be “tough.” He has not announced any definite plans about the pullout.

Mr. Austin’s arrival in Kabul came on Nowruz, the Persian new year — a date on which the Islamic State in Afghanistan had pledged to carry out attacks. So the trip was intended to remain confidential until two hours after he left, but local reporters broke news of his visit after he met with the Afghan president, Ashraf Ghani.

The stakes: A U.S. withdrawal could increase the risk of a takeover of the country’s key cities by the Taliban. Asked about the concerns Afghans might have over a pullout, Mr. Austin said: “We’ve done a lot to work with the Afghan security forces. And I don’t want to speculate about what could happen or what could not happen going forward.”

The numbers: Roughly 3,500 U.S. troops are now stationed in Afghanistan. American troops have had a continuous presence in the country since 2001.

The coronavirus is again rippling across India. Confirmed infections have risen to about 31,600 daily from a low of about 9,800 in February. In a recent two-week period, deaths from the virus shot up by 82 percent.

The outbreak is centered on the state of Maharashtra, home to Mumbai. Entire districts have gone back into lockdown. Scientists are investigating whether a new strain found in the state is more virulent, like variants found in Britain, South Africa and Brazil.

Officials are under pressure to aggressively ramp up testing and vaccination, especially in Mumbai. Stepping up vaccinations in India could have an impact globally. India is a crucial link in the vaccine supply chain: It has given away or sold tens of millions of doses to other countries, even as it struggles to vaccinate its own people.

The foreign minister has said that the availability of vaccines in India will determine how many doses go overseas. India’s slow vaccination campaign has also been plagued by public skepticism.

A growing chorus of health officials and advocacy groups are calling for Western governments to force companies to publish vaccine recipes, share their know-how and ramp up manufacturing to ensure broader vaccine access worldwide.

Prime Minister Imran Khan of Pakistan is isolating at home after testing positive for the virus.

U.S. Muslim groups are trying to get the word out that receiving a vaccination shot during the upcoming Ramadan will not break the fast.

The Chinese government has upended the political landscape in Hong Kong. Its plan to drastically overhaul the local electoral system, by demanding absolute loyalty from candidates running for office, is leaving factions across the political spectrum wondering what participation, if any, is still possible.

Moderates aren’t sure they would pass Beijing’s litmus test, and opposition leaders are uncertain about whether they will try to field candidates again. The changes are also likely to slash the number of directly elected seats in the local legislature, meaning the majority of lawmakers would be picked by government allies.

Quotable: “If we continue to participate in this game, it’s like we’re accepting what they’re doing,” said a pro-democracy activist. “That would make me feel like an accomplice.”

Context: The changes to the voting system signal the gutting of a promise that has been central to Hong Kong since its return to Chinese control in 1997: that its residents would some day get to choose their own leaders, rather than being subject to the whims of London or Beijing.

Anti-Asian Racism in the U.S.

Activists shouted “Stop Asian hate” and “Asians are not a virus” at weekend protests in the U.S. over the killings in Georgia on Tuesday of eight people, six of them women of Asian descent.

The endless list of disparities has made solidarity elusive for Asian-Americans, but the events of the past year may be uniting people for a new reason: fear.

On platforms like Telegram and 4chan, racist memes and posts about Asian-Americans have deepened anxieties and fostered dehumanization.

In China and South Korea, debate over the violence in Georgia has played out with far less intensity than it has in the U.S.

The New Yorker writer Jiayang Fan writes that to live through this period as an Asian-American is to feel trapped in a tragedy while being denied the legitimacy of being an American.

After Tony Hsieh’s shocking death, the task of leading Zappos, the online merchant best known for shoes, out of the pandemic falls to its new C.E.O., Kedar Deshpande, above.

Saudi Aramco said on Sunday that its net income last year had fallen by 44 percent, to $49 billion, as lower oil prices stemming from the pandemic cut into earnings.

Spectators from overseas will not be allowed to attend the Summer Olympics in Japan.

The rancor aired by top Chinese diplomats at a meeting with their U.S. counterparts in Alaska last week reflected a newly combative and unapologetic China, one increasingly unbowed by U.S. diplomatic pressure.

Chandro Tomar may look like a typical Indian grandmother, but she’s anything but: At 89, she’s believed to be the oldest professional sharpshooter in the world, and she has dozens of medals to show for it. She’s also a feminist icon in India.

In memoriam: Nawal el Saadawi, an Egyptian author, activist and physician who became an emblem of the struggle for women’s rights in the patriarchal Arab world and campaigned against female genital mutilation. She was 89.

Caity Weaver, a member of The Times’s Styles desk, ventured to Santa Fe, N.M., to try Equus, a horse experience that has a long list of famous clients like Bette Midler and Jeff Bezos. The program’s website encourages clients to “imagine creating the life you really deserve.” In a recent conversation, she reflected on her experience as she researched a story on whether we can learn anything from horses.

What did you know about Equus before you arrived in Santa Fe?

Not much. They purposely don’t have a lot of photos on their website. The founders told me that they don’t want people coming in with a specific idea of what their experience will be like, because then if it works out differently, clients could be disappointed.

So what elevated it to “I need to try this”?

One thing you always wonder with interesting experiences is, Is anyone actually paying to do this? And often, the answer is no. But the client list was so impressive — Margaret Atwood, Microsoft, a lot of other names I recognized. So I was curious to go and get out of it, presumably, whatever they were getting out of it. I’d love for my life to be as good as Bette Midler’s — I think.

What’s something fun or unexpected you learned?

Candace Croney, a professor of animal behavior and well-being at Purdue University, told me to think of horses the way you think of a cat — they’re not like a dog, who wants to be with you and wants attention. A horse doesn’t really want to be the main thing — maybe it wants to be petted and stroked, maybe it doesn’t. I didn’t learn that before I went, but if I ever meet another horse, I’ll just think of it like a big cat.

Bright, crunchy and tart, salad-e Shirazi is a Persian mix of cucumber, tomato, red onion and herbs tossed with a lime vinaigrette. It pairs well with practically every meal.

The documentary “Before the Dying of the Light” presents an inspiring view of the roiling visual-arts scene in 1970s Morocco.

Research on the growing popularity of cannabis among older adults in the U.S. points to rising anxiety and depression, conditions frequently cited as reasons to try cannabis.

Here’s today’s Mini Crossword, and a clue: Out in the open (Five letters).

That’s it for today’s briefing. See you next time. — Carole

The latest episode of “The Daily” is about the career of New York’s governor, Andrew Cuomo.

You can reach Carole and the team at [email protected].