We’re covering a breakthrough announcement from the U.S. on efforts to lift Covid vaccine patents, and new moves by Europe aimed at limiting Chinese competition. 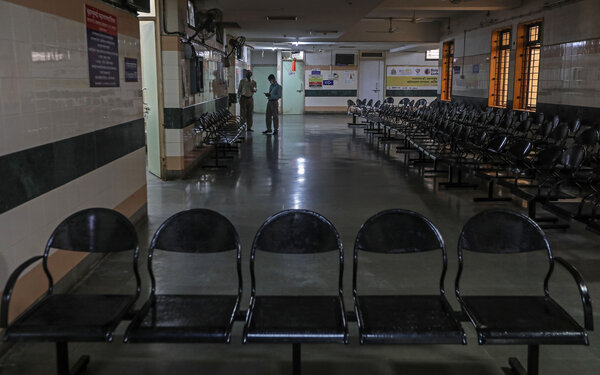 The Biden administration on Wednesday came out in support of waiving intellectual property protections for Covid-19 vaccines, a breakthrough for international efforts to increase vaccine access.

The U.S., Britain and the E.U. had been under growing pressure to share vaccine knowledge. “The extraordinary circumstances of the Covid-19 pandemic call for extraordinary measures,” Katherine Tai, the U.S. trade representative, said in a statement.

The World Trade Organization is holding discussions about waiving intellectual property protections, which India and South Africa have pressed for. Until now, the U.S. had blocked the plan. More discussions are expected.

Disparities: In much of the developed world, vaccine orders are soaring and life is roaring back to normal. But in poorer nations, the virus is raging on while vaccinations are happening far too slowly.

Good news: The German company CureVac’s new RNA vaccine, which could be ready next month, does not require that doses be kept in a deep freezer, like the Pfizer and Moderna vaccines. That means it could more easily deliver the power of RNA vaccines to hard-hit parts of the world.

Nepal’s growing coronavirus outbreak has spread to the Himalayas, with an increasing number of climbers on Mount Everest testing positive.

Yair Lapid, the centrist politician and former media celebrity, has 28 days to form a governing coalition after Prime Minister Benjamin Netanyahu failed to do so.

Israel’s president, Reuven Rivlin, gave him the mandate on Wednesday to begin negotiations. Should he fail, the country could face its fifth general election in a little more than two years.

In the March election campaign, Lapid, 57, a former finance minister, ran on a promise to preserve checks and balances, and to prevent Netanyahu, who is currently on trial for corruption, from remaining in office. Lapid’s party, Yesh Atid, came second behind Netanyahu’s right-wing Likud party.

Dynamics: To secure a coalition, Lapid has said he would be willing to share power with Naftali Bennett, a former settler leader who opposes Palestinian statehood and wants to annex large parts of the occupied West Bank. The divisions in Israeli politics currently make it impossible for Lapid to win office without reaching a compromise with parts of the far right.

Europe takes a tougher line on trade with China

The European Union took steps on Wednesday to limit competition from China that it considers unfair.

The European Commission said that it would take action against foreign companies that receive financial support from their governments, a move aimed at China.

“Europe is open for business, but come and do it in a fair and transparent manner,” said Margrethe Vestager, the bloc’s competition chief.

A separate proposal is intended to make Europe less dependent on China for crucial goods like semiconductors, drugs and batteries.

A shift: After tensions in E.U.-China relations and tit-for-tat sanctions, work on finalizing an investment deal years in the making between the bloc and China was “suspended” this week, the E.U. trade chief said. Europe’s tougher line toward China brings it more in line with the stance of the Biden administration, which objected to the investment agreement.

Russia has withdrawn only a few thousand troops from its border with Ukraine, senior U.S. officials said, and close to 80,000 remain, despite signals from Moscow last month that it was dialing down tensions. U.S. Secretary of State Antony Blinken will be in Kyiv through Thursday.

Two studies on rising sea levels show that cutting emissions would most likely reduce by half the contribution of ice to rising oceans this century. Missing the Paris agreement targets for limiting warming could lead to a tenfold increase in the sea-level contribution from Antarctica alone.

A French journalist who went missing in Mali last month said in a video on Wednesday that he had been kidnapped by a jihadist group operating in the region as he appealed for help from the authorities in France.

From 1959 to 1984, about 93,000 people migrated from Japan to North Korea under a program sponsored by both governments that promised them a Socialist paradise. There, they found destitute villages and poverty, but were forced to stay. Some ended up in prison camps. Lee Tae-kyung has campaigned tirelessly to share their stories.

Facebook’s Oversight Board ruled on Wednesday that, for the time being, Donald Trump would continue to be barred from using the site. Our OnTech newsletter writer, Shira Ovide, explained its decision, and the potential implications.

Facebook indefinitely suspended Trump after he used Facebook to condone the actions of the Capitol rioters. The Oversight Board the company created to review its decisions agreed.

A striking line from the Oversight Board’s decision was its criticism of Facebook for passing the buck on what to do about Trump. “In applying a vague, standardless penalty and then referring this case to the board to resolve, Facebook seeks to avoid its responsibilities,” the board wrote.

The Oversight Board has limitations.

In its first year of operation, the board has urged Facebook to be far more transparent. But the last year has also proved its limitations. Facebook makes millions of judgment calls each day on people’s posts and accounts. Most of the people who believe Facebook made a mistake will never get heard by the board.

Gungjung tteokbokki, a savory-sweet rice cake dish, is similar to the one served in the Korean royal court during the Joseon Dynasty.

In her ninth novel, “Secrets of Happiness,” Joan Silber delivers “something humane, elegant and wise,” our reviewer writes. Read an excerpt.

Power up your to-do list with the free task-reminder feature on your phone. Here’s how to make the most of it.

P.S. The Times announced its first-quarter earnings and now has a total of 7.8 million subscribers.

The latest episode of “The Daily” is about the low birthrate in Japan.

Remy Tumin contributed to this briefing. You can reach Melina and the team at [email protected].