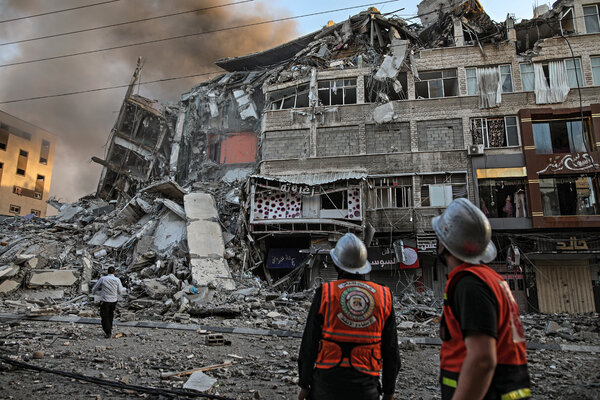 An explosive new round of hostilities between Israel and Palestinian militants intensified with frightening speed, as Israel continued its airstrikes in the Gaza Strip and Hamas responded with more than 1,000 rockets, most of which Israel’s antimissile defense system intercepted. Follow live updates here.

The fighting has now spread to Israel’s streets, in a wave of mob violence between Jews and Arabs. Israeli officials said they had “locked down” the city of Lod, the first such action in decades, and arrested 280 people across the country who were accused of rioting.

Palestinian discontent has festered for years in the absence of peace talks between the two sides, and with little international pressure on Israel to compromise or grant any concessions to Arabs living under occupation.

In densely populated Gaza, there are few places to find shelter from the strikes. Palestinians do what little they can, like leaving windows open so they won’t burst into shards, or moving to ground-level apartments and rooms.

Casualties: Israel said it had assassinated 10 senior Hamas commanders. Civilians have borne the brunt of the violence: More than 65 Palestinians and seven Israelis have died, including children on both sides.

U.S. response: President Biden said he had spoken with Prime Minister Benjamin Netanyahu and asserted his “unwavering support” for Israel’s “right to defend itself.”

Analysis: Netanyahu’s foes have seized upon the conflict, pointing to what they call his negligence and failures as evidence of a need to change the government.

A Covid spike in the world’s most vaccinated nation

Earlier in the pandemic, the archipelago nation of the Seychelles won acclaim for becoming the world’s most vaccinated country. It relied heavily on China’s Sinopharm vaccine as it inoculated more than 60 percent of its roughly 100,000 people.

But a surge in coronavirus cases, including among the fully vaccinated, now has some questioning that choice of vaccine — even as health officials noted that though people were becoming infected, they were not getting very sick.

Developing nations that use the vaccines from China may end up lagging behind countries that deploy shots with stronger efficacy numbers, scientists have warned. Infections have plummeted in Israel, for instance, which has used the Pfizer-BioNTech vaccine and has the world’s second-highest inoculation rate.

Quotable: “You really need to use high-efficacy vaccines to get that economic benefit because otherwise they’re going to be living with the disease long term,” said Raina MacIntyre, a biosecurity expert at the University of New South Wales in Sydney.

In the United States, the C.D.C. allowed states to begin offering the Pfizer vaccine to 12- to 15-year-olds.

International donors have raised millions to help India through its Covid crisis, but Prime Minister Narendra Modi’s administration has put hurdles in place for overseas organizations and guided the money to officially endorsed groups.

Will China allow couples to have a third child?

As China’s ruling Communist Party gradually loosens its long-held restrictions on childbirth, some local governments have tacitly allowed couples to have more than two children. Now, lawmakers, scholars and officials are urging the central government to abolish the limits.

A population census released this week showed a significant decline in birthrates, underscoring the need for such changes. But the party is wary of giving up its control: Many officials seem to believe that not all Chinese people can be trusted to know how many children they should have.

Context: China’s one-child policy was in force from 1980 until 2016, when couples were given the right to have two children. During that period, family planning agencies coerced women into being fitted with intrauterine devices or having abortions. They also collected billions in fines annually from rule breakers.

Case study: The parents of Chen Huayun, 33, hid her during school holidays because she was their second child, fearing that they would lose their jobs as civil servants. “It was only when they retired that their colleagues knew that I existed,” she said.

Jean Castex, the French prime minister, and the army’s chief of staff have condemned an anonymous letter signed by people claiming to be active-duty troops. The letter warned of impending “civil war” in France fueled by Islamism.

House Republicans ousted Representative Liz Cheney of Wyoming from their leadership for her refusal to stay quiet about Donald Trump’s election lies.

U.S. authorities detained almost 179,000 people along the border with Mexico last month, the most in at least two decades.

The U.S. government’s first account of the effects of climate change since 2016 found that the frequency of heat waves had tripled since the 1960s, and that wildfires had gotten bigger and were starting earlier in the year. Above, a fire in Orange County, Calif., in December.

A science experiment dating to 1879 is sending up sprouts. Scientists planted seeds stashed away well over a century ago; as of Tuesday, 11 had germinated.

Ellen DeGeneres will end her daytime talk show next year.

Colombia’s police force was built for war. After decades of fighting left-wing guerrillas and paramilitaries, it is now cracking down on civilian protesters.

“They see us as the enemy, knowing that we are citizens,” said one protester, who said he was detained and beaten by police officers who forced him to drink their urine. At least 42 people have died, including a police officer, though human rights organizations say the total is probably higher.

What the fighting in Israel and Gaza means for Biden

Our On Politics newsletter spoke with the Middle East expert Mark Perry, an analyst at the Quincy Institute for Responsible Statecraft, about U.S. policy on the Israeli-Palestinian conflict. This is a lightly edited excerpt.

Since taking office, President Biden has been rather quiet on the Israeli-Palestinian conflict. Is he trying to draw back the U.S.’s involvement or would he like to keep things the way they are?

Biden’s been a longtime supporter of Israel. I think the Israeli-Palestinian issue just sucked up so much air in previous Democratic administrations that he’s really hesitant to allow that to happen again. We’ve got other equities in the Middle East other than Israel.

And I think there’s a certain amount of exhaustion among Middle East diplomats with the conflict. It’s intransigent. We’re not going to be the ones to solve it. If Israel isn’t ready to negotiate, and the Palestinians aren’t ready to negotiate and solve their problems, how are we going to possibly succeed?

So what’s Biden’s option? One option is to issue a statement like the one he issued on Saudi Arabia: “We support you, but our support is not unconditional. We expect that Israel will take steps to ensure the rights of the people they occupy.”

What about the argument that other nations in the region have their daggers behind their backs and are just waiting for their chance to wipe out Israel?

Signaling to Israel that our support is conditional is not an invitation to Egypt and Jordan to attack Israel. Were they to do so, they’d be defeated in 24 hours. We’d come to Israel’s support.

But that doesn’t mean they’re not an ally. Our support for allies has always been conditional. We made it clear to the British in World War II that we were their allies and we would support them, and that we’d even float money to support their economy, but that we were in charge of the relationship. We’re not in charge of the relationship with Israel, and we need to be. They’re in charge, and they’ve been in charge because they’ve always been able to count on bipartisan support in Congress. That is now changing.

This Indo-Chinese shrimp dish features a generous amount of crushed black peppercorns in a velvety gravy.

The joyously peculiar book “How Iceland Changed the World” investigates why this country with the soul of a very small town can sometimes shut down the globe.

Thought for the Day

Only 44 people have reached the top of all 14 of the world’s highest mountains. Or, researchers say, maybe no one has. It all depends on how you define a summit.

Here’s today’s Mini Crossword, and a clue: Habitat for a worm (four letters).

That’s it for today’s briefing. See you tomorrow. — Natasha

The latest episode of “The Daily” is about Representative Liz Cheney.