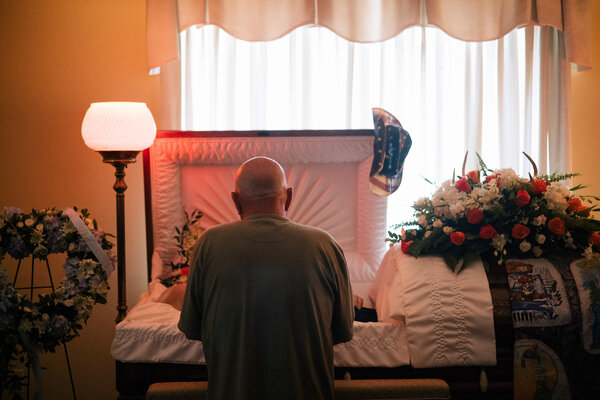 As new infections plummet, many newly vaccinated Americans are leaving their masks behind, planning summer travel and joyously reuniting with family and friends.

But for those who have lost a loved one, the worst has just begun. Even now, about 450 deaths are being reported each day, leaving hundreds of families dealing with a new kind of pandemic grief. In one bittersweet sign of the dissonance, the pandemic has improved enough that funerals can happen mostly in person again.

Most of those dying from Covid-19 today are unvaccinated. While some who died in recent weeks became sick before they were eligible for shots, others were hesitant to be vaccinated or simply had not gotten around to it.

Quotable: “Everybody is saying, ‘Oh, it’s fine,’” said one woman mourning her husband. “I’m just thinking to myself, ‘If you only knew what I just went through.’”

Hitting the skies: Air passenger traffic in the U.S. hit a pandemic peak on Friday. But airlines have also seen a surge in disruptive and sometimes violent behavior often related to the requirement that passengers remain fully masked throughout flights.

Dogs are being trained to sniff out the coronavirus and showing impressive results. Our correspondent met some of the good boys and girls doing the work in Thailand.

The Indian capital, New Delhi, is taking its first steps back toward normalcy after one of the world's worst outbreaks.

The W.H.O. has devised a less technical system for naming variants using the Greek alphabet. The variant B.1.617.2, which contributed to India’s deadly surge, has been named Delta, while B.1.1.7, the variant first detected in Britain, is now Alpha.

China will allow couples to have 3 children

China said on Monday that it would allow all married couples to have three children, ending the country’s two-child policy as a demographic crisis looms and the labor pool shrinks.

But as couples in China confront long work hours, poor day-care provision and the rising costs of education and supporting aging parents, it is not clear that the strategy will pay off. In a nod to those concerns, the country indicated it would improve maternity leave and workplace protections, though they remain all but absent for single mothers.

Analysis: Prominent voices within China have unsuccessfully called on Beijing to scrap its restrictions on births altogether. “Opening it up to three children is far from enough,” said one demographer. “It should be fully liberalized, and giving birth should be strongly encouraged.”

By the numbers: Births in China have fallen for four consecutive years. The country’s total fertility rate — an estimate of the number of children born over a woman’s lifetime — is now 1.3, well below the replacement rate, 2.1.

After four inconclusive elections in Israel in four years, a potential coalition between Naftali Bennett, who leads a small right-wing party, and Yair Lapid, the centrist leader of the Israeli opposition, could break the deadlock and get the country back on track. Here’s what you need to know.

The biggest loser from the coalition would be Benjamin Netanyahu, Israel’s longest-serving prime minister, and his conservative Likud party, by far the largest in Israel’s Parliament. Two ultra-Orthodox parties that are his staunchest allies would also be out of government.

Leaders of the potential coalition have indicated they would avoid the issues that have polarized Israeli society, at least for the first year. Analysts caution that the alliance’s main glue is the desire to remove Netanyahu, and that it may not last long once that is achieved.

Farewell to Bibi: If Netanyahu, who faces trial on corruption charges, is once again leader of the opposition, he would most likely be denied parliamentary immunity. Separately, a majority against him could pass legislation imposing term limits or barring any candidate who has been charged with crimes from running for office.

Naomi Osaka dropped out of the French Open after officials threatened to expel her if she refused to attend news conferences after matches.

Britain will expedite the relocation to the U.K. of Afghan staff members, largely interpreters, who worked for the country’s armed forces and are increasingly at risk ahead of the withdrawal of U.S. and NATO troops.

More than a third of heat-related deaths in many parts of the world can be attributed to the extra warming associated with climate change, according to a new study. Above, a heat wave in Pakistan this month.

Turkey’s intelligence service claimed it had captured the relative of a cleric accused of orchestrating a failed 2016 coup and taken him from his home in Kenya, as President Recep Tayyip Erdogan continued his crackdown on people accused of being connected to the putsch.

Texas Democrats halted a sweeping G.O.P. overhaul of voting laws that would make it harder for many to go to the polls, but the Texas governor is moving to hold a special session to get the measures passed.

A new exhibition at the Victoria and Albert Museum in London celebrates 5,000 years of dazzling arts and crafts in Iran, but, somehow, contemporary politics keep getting in the way.

President Biden is aiming to rebuild and expand immigration: Documents obtained by The Times show far-reaching efforts to undo much of his predecessor’s legacy.

Our Afghanistan correspondent Thomas Gibbons-Neff revisited Marja, a town in Helmand Province that he first encountered as a 22-year-old Marine, and where his friends and many Afghan soldiers and civilians died.

Ancient Rome will never get old

David Marchese, a writer for the Magazine, sat down with Mary Beard, the Cambridge classics professor and best-selling author, to discuss our fascination with the ancient world. This conversation has been lightly edited and condensed.

Why do we have this almost instinctual urge to continue looking for parallels in ancient Rome?

Ancient Rome provides a safe space for us to discuss issues about communal living, politics, exploitation, in which we’re not invested because it’s so far in the past.

For me, Rome was a brutal and exploitative empire. But the idea of looking at a big, nasty imperial community who saw their origin in migration, in asylum, and that always traded on the incorporation of the foreign — it takes us out of some of our assumptions.

Does all the time you’ve spent in trying to understand historical peoples’ mind-sets give you any insight into how we might end up being understood?

One thing that I ask my undergraduates to do is to fast-forward 200 years: What do you think people will be writing essays about us on? What will they find deplorable or puzzling?

Once they start to think about it, they get many answers: How can you possibly treat the old in that way? We have dumping grounds for the elderly. History is about learning to put yourself in proportion to a rather longer time span.

In the last few years there has been a real resurgence of popular interest in Stoic philosophy — why’d you just roll your eyes?

This is one of the more mystifying bits of interest in the ancient world: clichéd self-help from a philosophy that was nasty, fatalistic, bordering on fascist.

What comes out in Marcus Aurelius particularly is rather clichéd thoughts that come with the rubber stamp of great antiquity because they were written by an emperor — an emperor about as brutal in massacring the enemy as Julius Caesar. But we tend to forget that side of him because he’s a bearded “philosopher.”

It’s not very salutary to look at your Amazon ratings, but I always feel terribly pleased when I’m higher up than Marcus Aurelius.

Kate Winslet stars in “Mare of Easttown,” a drama series. “I loved her marks and her scars and her faults and her flaws,” she said of her character.

The world’s northernmost tracking base, on a Norwegian island, plays a crucial role in supporting research on climate change.

That’s it for today’s briefing. See you next time. — Natasha

P.S. The Times’s Opinion editor, Kathleen Kingsbury, joined “Amanpour and Company” on PBS to discuss the importance of being exposed to an array of ideas and opinions.

There is no new episode of “The Daily.” Instead, try the latest episode of the Book Review podcast, which features Jean Hanff Korelitz discussing her new book, “The Plot.”