We’re covering a major climate report and the rapid fall of Afghan cities to the Taliban. 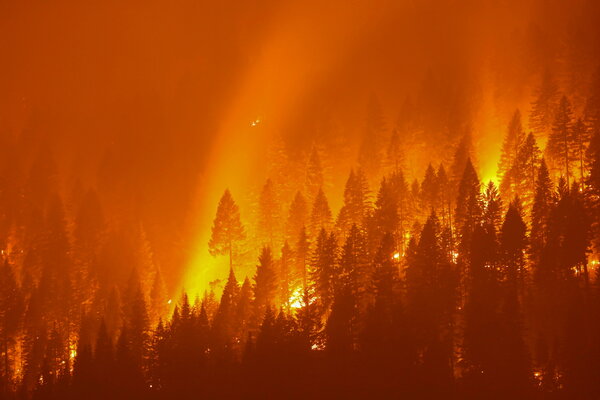 Nations have delayed curbing fossil fuels for so long that they can no longer stop global warming from intensifying over the next 30 years, though there is still a short window to prevent the most harrowing future, a major new U.N. report has concluded.

Humans have already heated the planet by roughly 1.1 degrees Celsius since the 19th century, largely by burning coal, oil and gas for energy. Total global warming is likely to rise around 1.5 degrees within the next two decades.

Nearly 1 billion people worldwide could swelter in more frequent life-threatening heat waves. Hundreds of millions more would struggle for water because of severe droughts. Some animal and plant species alive today will be gone.

A coordinated effort to stop adding carbon dioxide to the atmosphere by around 2050 would likely cause global warming to level off at around 1.5 degrees Celsius, preventing far greater perils.

Quotable: “We can expect a significant jump in extreme weather over the next 20 or 30 years,” said Piers Forster, a climate scientist who helped write the report. “Things are unfortunately likely to get worse than they are today.”

Climate news: In the U.S., the Pacific Northwest and the Midwest regions will experience intense heat again this week.

In just days, the Taliban have overtaken six provincial capitals in a brutal new chapter of the war that has led many local officials to abandon their posts and flee the cities they administer.

Fighting on the outskirts of Aybak, the capital of Samangan Province, began on Monday morning as the Taliban pushed into the city, having toppled a nearby district two days earlier. By the afternoon, most of the city was under insurgent control.

The rapid fall of the cities is a bad omen for Kabul. Residents of Kunduz described uncertainty and shattered hopes after a takeover there.

Context: The recent attacks have violated the 2020 peace deal between the Taliban and the U.S. that laid the path for the American withdrawal. The Taliban had committed to not attacking provincial centers.

What’s next: The key northern city of Mazar-i-Sharif is now largely surrounded, but U.S. and U.N. officials say a fledgling plan to slow down the Taliban does now exist.

China has taken a zero-tolerance approach to the coronavirus since bringing it largely under control last year. With the Winter Olympics in Beijing just six months away, preparations far more intense than those for the Summer Games in Tokyo are taking place at dozens of venues in the city.

Organizers and authorities are working tirelessly to make sure that athletes have essentially no contact with referees, spectators or journalists. Quarantines and entry will be strict for the Games, to be held Feb. 4 to 20. Thousands of Chinese staff members will have to live in the bubble throughout the Games and then “re-enter” the rest of China after a lengthy quarantine.

Some of the things you’ll see this winter: guards in biohazard suits, plastic barriers for interviews, all-day armpit thermometers with tiny transmitters. No decision has been announced on vaccination requirements.

China’s virus response: The government has fired or reprimanded dozens of local officials nationwide, blaming them for the worst outbreak in a year — hundreds of cases across several provinces.

South Korea opened its vaccine to all adults after delays in the rollout.

France began requiring proof of vaccination or a negative coronavirus test for access to cafes, restaurants, bars and long-distance trains.

Samsung’s de facto leader, Lee Jae-yong, will be paroled after serving prison time for bribing South Korea’s former president. The country has been divided over his early release.

A volcanic eruption on Indonesia’s Mount Merapi sent lava flowing down its slopes for the second day on Monday, The A.P. reports.

Nagasaki marked the 76th anniversary of the U.S. atomic bombing there with its mayor urging Japan, the U.S. and Russia to do more to eliminate nuclear weapons, The A.P. reports.

China’s famous herd of wandering elephants appears to be on the way home after 17 months, The Guardian reports.

A fund created to compensate victims of sexual assault by Jeffrey Epstein paid out over $121 million to more than 135 people.

The top aide to Gov. Andrew Cuomo of New York resigned, and one of the women who accused him of sexual assault spoke out in a televised interview. “It was not welcomed, and it was certainly not consensual,” she said of his behavior.

Infighting in South Sudan is tearing at the shaky governing coalition.

Experts studying “Havana syndrome” — the mysterious illness affecting scores of diplomats, spies and their family members — are struggling to find evidence to back up the leading theory: directed microwave attacks.

The world of vegetarian cooking is vast and diverse, and our new newsletter celebrates exactly that. Here’s a look from our critic Tejal Rao.

By trade, I’m an omnivore. But when I cook at home, what I want more and more of is vegetables. I already knew that the pleasures of vegetarian cooking are endless, but I wanted a place to concentrate on it. So starting this week, I’ll be writing a new weekly newsletter: The Veggie.

On Thursdays, I’ll share vegetarian recipes and notes from my own kitchen, and from my colleagues. You can expect traditional dishes from long-established vegetarian cuisines, as well as adaptations and fun experiments, quick everyday recipes and special occasion dishes that require a bit more planning.

Despite my own inconsistencies when it comes to shopping and planning, vegetables always lead me to something delightful and satisfying. And that’s the thing about a good vegetarian recipe: It leads you to a delicious meal, then makes hundreds more possible.

These meatballs have a secret: They’re half vegetable, half chicken.

In “Billy Summers,” by Stephen King, a hired killer is lured from retirement for one last job.

The latest episode of “The Daily” is about schools and the Delta variant.