We’re covering the second part of The Times’s investigation into President Trump’s federal tax returns, the growing numbers of virus conspiracy theorists in Europe and the stirring signs of China’s economic rebound. 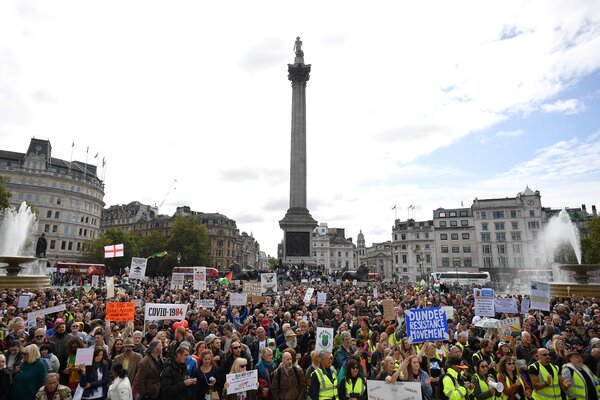 The thousands of protesters who packed Trafalgar Square in London on Saturday (and a week earlier) to rally against Britain’s coronavirus restrictions had counterparts in Berlin, Brussels, Dublin and Paris. In each of these cities, many have called the pandemic a hoax — even as the global death toll has reached one million.

These theories include the groundless beliefs that masks are ineffective, or may in fact sicken people; that there is some relationship between 5G and the pandemic; and that lockdowns are simply a tool of oppression by the government.

In other coronavirus developments:

In the 10 months since a mysterious pneumonia first appeared, Covid-19 has killed more than one million people — a toll compiled from official counts that far understates how many have really died.

Many survivors of Covid-19 are suffering from serious, debilitating and mysterious effects, months after first becoming ill.

New York City is on the precipice of a financial abyss, after the pandemic crippled tourism, retail and the culture sector. The economic damage could last years.

Infected or exposed people who do not self-isolate in England now face fines of up to 10,000 pounds, or almost $13,000, as the nation battles a second coronavirus wave.

In France, residents of the southern cities Marseille and Aix-en-Provence are irate after the government ordered the closure of restaurants and bars.

How ‘The Apprentice’ saved Trump from financial ruin

In January 2004, months after the inaugural episode of the reality television series that would make him a global celebrity, Donald Trump filed his individual tax return, reporting $89.9 million in net losses from his core businesses for the prior year. But the show would be his saving grace, giving him a new $427 million lifeline, according to the second article in The Times’s investigation of Mr. Trump’s federal income tax returns.

His growing celebrity earned him gigs promoting ring tones, hamburgers, even laundry detergent. Mr. Trump also began to lend his name to buildings he didn’t own, collecting big fees as his investors lost millions, and to put his wealth toward luxurious golf courses that would eventually fall deep into the red.

Response: Republican lawmakers reacted with nearly complete silence to the first article in the investigation, published on Sunday. But Democrats pounced: Former Vice President Joe Biden, the party’s presidential candidate, posted a video noting that the president paid less in income taxes than everyday Americans like teachers, firefighters and nurses.

Forthcoming: Mr. Trump and Mr. Biden will go head-to-head on Tuesday in the first presidential debate. It’s expected to be a high-stakes clash of style, ideas and values.

Big crowds this weekend at Beijing’s first major auto show since the coronavirus spread around the world are yet another sign of China’s recovery.

After shrinking in the first quarter, the Chinese economy has now resumed its surge, with the country’s wealthy spending once again. Restaurants, hotels and airports are crowded again. The recovery in spending has begun spreading to middle-class families, but many low-income workers are still struggling.

“The richest regions are outperforming across the board,” particularly export regions along the coast, while the rest of the country lags, said Derek Scissors, the chief economist of the China Beige Book analysis group.

The data: Chinese officials are expected to report next month that growth accelerated during the July-to-September quarter, even while the rest of the world limped along.

Related: Japan is rethinking its reliance on trade with China, and it is working on ties with Australia and India.

If you have 6 minutes, this is worth it

A 10-year setback for the world’s women

Amid the pandemic, working women across the globe face brutally hard choices. While many have already been laid off, others are weighing the need to stay home with the risk of being penalized by their workplace for needing more flexibility. Above, Miriam Flores offers a free day care service for single mothers in Lima, Peru.

Sveta Skibinsky Raskin, a mother of five who lives in Jerusalem, worked as a writer while her children were in school and day care. But when the schools closed, she had to stop. “I tried for a week and I just couldn’t do it,” she said. The loss of school and day care “is going to take our women 10 years back,” the head of one charity service said.

Uber in London: A judge ruled that the ride-hailing service could continue operating in the city after a battle with transportation regulators who had threatened to ban its cars over safety concerns. Uber has up to 45,000 drivers in London.

Catalonia: The Supreme Court of Spain on Monday upheld a ruling barring the separatist leader of the autonomous community from public office, a decision that threatens to renew tensions in the restive northeastern region.

Migrant crisis: Crew members on an Italian warship lauded back home for stopping migrants headed for Europe are said to have used their vessel to smuggle hundreds of thousands of contraband cigarettes.

California wildfires: Two fast-moving blazes, the Zogg Fire in Shasta County and the Glass Fire in Napa and Sonoma Counties, have burned more than 26,000 acres, prompting new evacuation orders for thousands of people.

Snapshot: Above, Katayga, a village in Siberia. Once a vast prison ground for political exiles, the banks of the Ket River are now home to a range of remote and isolated communities.

Lives lived: The climber Ang Rita Sherpa, who earned global fame by scaling Mount Everest 10 times without the use of supplemental oxygen, died at 72 last week at his daughter’s house in Kathmandu.

What we’re reading: This Radio New Zealand report by a journalist who took to court a man who filmed her while she was undressing in a Kmart changing room. It’s a brave, thoughtful look at victim-blaming.

Cook: This Sri Lankan dal with coconut and lime kale begins by quick-cooking red lentils and deepening their flavor with fried green chiles, garlic and ginger.

Read: In “The Meaning of Mariah Carey,” the singer and songwriter opens up about abuse, infidelity, racism and much more.

Watch: The short “Father of the Bride Part 3 (ish)” on YouTube is a sort-of sequel born amid worry about the pandemic. Nancy Meyers, the director, wrote: “This one, with its positive themes and love of family, made me feel whole at a time when I needed it most.”

It’s good to get some new inspiration on what to read, cook, watch and do while staying safe indoors. At Home has our full collection of ideas.

How responsible is Facebook for what happens on its site?

Charlie Warzel, a writer for The Times’s Opinion section, believes sites like Facebook have a responsibility to make democracy work better by targeting misinformation. He talked to our On Tech newsletter about how much blame these companies deserve for divisions in the United States.

You want tech companies to push people toward factual election information and make voting easier, but worry that corporations like Facebook have too much power.

We talked in the spring about a similar feeling I had about technology companies and coronavirus exposure alerts. When crises happen and important institutions like the government fail us, we look for adults in the room. These companies are potential adults, and there’s something soothing about that. But it’s also crazy to ask maybe a dozen unelected people in charge of big internet companies to protect a pillar of American democracy.

Do we place too much blame on internet companies for what individuals do on their sites?

I don’t blame Facebook for the ills of the country. But it is an accelerant, and what galls me is that the company seems unwilling to grapple with that in a serious way — while feigning that it is.

Mark Zuckerberg, the company’s chief executive, said Facebook often receives negative feedback from people concerned the company removes too many posts, which they often interpret as the company’s bias against conservative views.

If you want Facebook to more aggressively demote or delete manipulative or potentially dangerous posts but its customers are concerned about censorship, isn’t the company right to be cautious?

And there is Facebook that acknowledges it has a social responsibility as essential communications infrastructure for elections, the pandemic and more. McDonald’s wants customers to be happy, but it doesn’t try to secure elections.

That’s it for today’s briefing. Hope your week is off to a fabulous start.

Thank you
To Theodore Kim and Jahaan Singh for the break from the news. You can reach the team at [email protected]

P.S.
• We’re listening to “The Daily.” Our latest episode is about Amy Coney Barrett, the judge nominated to the U.S. Supreme Court.
• Here’s our Mini Crossword, and a clue: Protagonist (four letters). You can find all our puzzles here.
• Nestor Ramos, a Pulitzer Prize finalist at The Boston Globe, is coming to The Times’s Metro desk as an assistant editor.
• The word “jangjorim” — a Korean beef dish — first appeared in The Times on Monday, according to the Twitter bot @NYT_first_said.