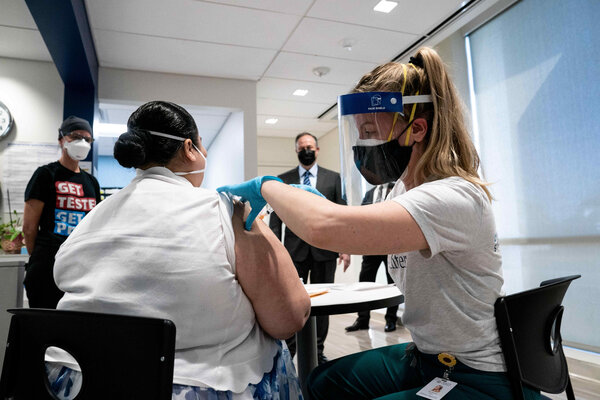 U.S. in a race against a potential new virus surge

The United States is ramping up the pace of vaccinations, with most states rapidly expanding eligibility, but the spread of variants paired with loosening restrictions are threatening to reverse progress.

After weeks of decline followed by a plateau, coronavirus cases seem to be rising again in the U.S. Over the past week, there have been an average of 65,382 cases per day, an increase of 19 percent from the average two weeks earlier.

States like Florida and Texas, both overwhelmed by the virus, have removed mask mandates and precautions most experts still call necessary. President Biden on Monday urged state leaders to keep certain restrictions in place. “We are giving up hard-fought, hard-won gains,” he said.

The variants: Experts are concerned about the B.1.1.7 variant, which walloped Britain and is gaining steam in Florida. The U.S. is behind on its attempts to track them, as Americans increase their travel for spring and summer holidays.

The leaders of more than two dozen countries, the European Union and the World Health Organization proposed an international treaty to protect the world from pandemics. The pact would include measures to promote equitable access to vaccines, medicines and diagnostics.

A surge of coronavirus cases is taking a heavy toll in Pakistan, with Prime Minister Imran Khan and President Arif Alvi among several senior officials to have contracted the virus. The government has imposed a ban on public gatherings, sports events and wedding ceremonies, starting in April.

Our reporters broke down more of what they learned — and what questions remain — from a recent joint W.H.O. report into the origins of the coronavirus.

China’s sweeping overhaul of Hong Kong’s election system will give national security bodies vast power over who can run for office, a move that could sideline the pro-democracy opposition for years to come.

The changes were approved Tuesday by a committee of the Communist Party-controlled National People’s Congress to give Beijing an even stronger legislative majority there. Beijing and its handpicked local leaders now have vast powers to block any opposition candidate China deems disloyal.

Fewer elected seats: The move slashes the proportion of directly elected seats to less than a quarter from half. Forty seats on the 90-member legislature will be chosen by an election committee, a pro-Beijing body.

Vetting: Any potential candidate to become a lawmaker will first be investigated by the Hong Kong police and the city’s national security committee. Their reports would be handed to a new vetting committee, whose decisions on qualifying candidates cannot be appealed in court.

The second day of proceedings in the trial of the former police officer Derek Chauvin for the killing of George Floyd opened with testimony from people who witnessed the scene. Many of them were minors at the time, and some described being haunted by what they saw. Here’s the latest.

The video of Mr. Chauvin kneeling on Mr. Floyd’s neck for nine minutes circulated around the world and challenged the police’s initial narrative. For much of the public, it has been a key part of their understanding of what happened. But the defense is asking jurors to consider other factors.

Emotional testimony: Darnella Frazier, the teenager who filmed Mr. Floyd’s arrest, held back tears as she described arriving on the scene and seeing him “terrified, scared, begging for his life.” “It’s been nights I stayed up apologizing and apologizing to George Floyd for not doing more,” she said.

Tense exchanges: The defense lawyer sought to discredit Donald Williams, a mixed martial arts fighter who was a witness, arguing that bystanders made officers’ jobs harder. “You can’t paint me out to be angry,” Mr. Williams said multiple times.

Catch up: Read the takeaways from the first day and the second day of the trial.

The Islamic State claimed responsibility for the ambush of a port town in northern Mozambique last week that forced tens of thousands to flee the area and left dozens of people dead. The attack on the town, Palma, was an alarming escalation of the war in the province of Cabo Delgado.

A man attacked a 65-year-old woman on a Manhattan sidewalk Monday in what the police said was an anti-Asian hate crime. The victim is in the hospital, and the police are searching for the attacker.

Federal prosecutors charged Ghislaine Maxwell with sex trafficking of a minor, accusing her of grooming a 14-year-old girl to engage in sexual acts with Jeffrey Epstein.

The official body investigating police conduct at a London vigil for Sarah Everard, who was killed while walking home this month, has determined that the city’s police “acted appropriately” at the event, according to a report released on Tuesday. The police had faced widespread criticism for their actions.

Peace deal or not, Taliban members think they have already won the war — from the recent bellicose speech of their deputy leader, boasting of “conquests,” to sneering references to the “foreign masters” of the “illegitimate” Kabul government. Our reporter looks at how that belief, grounded in military and political reality, is shaping Afghanistan’s volatile present.

Chinese restaurants have suffered more during the pandemic than most other U.S. restaurants.

Their business began declining sooner — in January of last year, when news broke that a new virus was circulating in Wuhan, China. The restaurants have also had to cope with a rise in anti-Asian racism — “vandalized, robbed, attacked online in racist Yelp reviews,” as The Washington Post reported.

At least 17 of the 300 restaurants in New York’s Chinatown have closed, including its largest, Jing Fong, a 20-year-old banquet hall that served 10,000 people a week. Grace Young, a decorated author of cookbooks, is worried that traditional Chinatowns, like New York’s and San Francisco’s, will never recover. She has spent months trying to call attention to the problem. “When you step into those restaurants, you are stepping back in time, and it’s a privilege,” Young said on a recent episode of “The Splendid Table,” a food podcast.

In The Times, Bonnie Tsui has more tips for supporting restaurants.

Umami-rich seaweed takes creamy asparagus pasta to the next level.

We rounded up the 50 best shows on Netflix right now, including “Lupin” and “City of Ghosts.”

Ad blockers and password managers are a few of the ways you can protect your digital privacy with ease.

P.S. Somini Sengupta, our international climate reporter, joined CBSN to discuss how the decline of public transit use is negatively impacting climate change.

The latest episode of “The Daily” is on a national campaign to restrict voting.

David Leonhardt contributed. You can reach Melina and the team at [email protected].