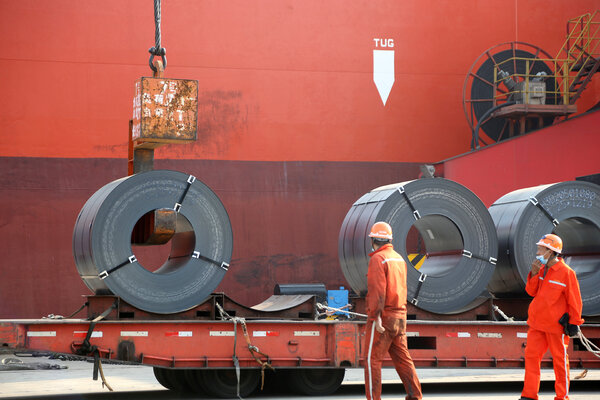 How rising prices in China are being felt around the world

As inflation worries circle the globe, Beijing is moving swiftly to protect its factories and workplaces from rising costs. Some of its anti-inflation tools include subsidies for small businesses to pay for commodities and limits on commodities trading to rein in speculation.

The government is discouraging steel makers and coal producers from raising prices and allowing its currency to rise to a value unseen in years. For now, wholesale prices are increasing, and the measures may just slow the rise instead of stopping it. Those rising prices can already be felt throughout the world.

Prices are up in the U.S. and elsewhere for soybeans, napkins and other products, prompting warnings that a wave of inflation could threaten the global economy. For now, Chinese manufacturers, rather than consumers, are feeling the price increases.

What’s ahead: Many economists believe price increases will moderate once companies clear supply bottlenecks caused by the coronavirus pandemic.

Related: New trade data suggests the outlook for the U.S. economy will depend in part on the rate of recovery of other nations.

Global law enforcement officials have revealed a three-year operation in which they said they had intercepted over 20 million messages revealing criminal activities, such as a plan to ship cocaine from Ecuador to Belgium in cans of tuna. At least 800 people were arrested in more than a dozen countries.

The F.B.I., working with Australian police, recruited an informant to sell cellphones to crime syndicates. The phones had a hidden function that sent encrypted messages and photos.

Over three years, more than 12,000 devices were sold to crime rings operating in more than 100 countries. Users trusted the devices’ security so much that they often laid out their plans not in code, but in plain language.

A big fish: A breakthrough came when one of the devices got into the hands of Joseph Hakan Ayik, an Australian the police believe has imported drugs from Turkey. Other people ensnared included Italian organized crime members and Australian motorcycle gangs. In Sweden, the police made 155 arrests and prevented the killing of 10 people thanks to the operation, the authorities said.

In other tech news: A global internet outage briefly took out sites including The Times and the British government on Tuesday. The outage was connected to Fastly, a provider of cloud computing services, which said that a fix was being made.

Pilots in India are seeking payouts over Covid deaths

The country’s pilots, especially those working for Air India, the airline controlled by Prime Minister Narendra Modi’s government, are asking for better compensation for the families of airline crew members who died of Covid.

On Monday, the Federation of Indian Pilots filed a lawsuit in the Bombay High Court, seeking better compensation, insurance benefits and vaccination for all airline crew members.

The Air India pilots had their salaries reduced during the pandemic. Their union points out that many of them came to India’s aid when people and vaccines needed to be transported. Many were not vaccinated themselves.

The toll: The federation said in its petition that as of February, nearly 2,000 Air India staff members had tested positive for Covid-19. More than 500 of them required hospitalization. At least 17 died, according to the Indian Pilots’ Guild.

Compensation: Union officials said Air India was paying about 500,000 to 1 million rupees ($6,800 to $13,700) as compensation to the family of a pilot who died of Covid-19. That number, they say, is a fraction of what other airlines pay, and often barely enough to pay hospital bills.

The Philippine government said it would expand its Covid-19 vaccination drive this week by opening up shots to millions more essential workers. So far, supplies have been lagging.

The Chinese pharmaceutical company Sinovac approved a vaccine for kids as young as 3.

Kappa Sushi, a restaurant chain that operates more than 300 sushi bars across Japan, is offering takeout customers an at-home version of the conveyor belt sushi experience.

Israel’s Parliament will decide Prime Minister Benjamin Netanyahu’s future on Sunday when it holds a vote of confidence in a new coalition government.

Wealthy Americans like Jeff Bezos, Warren Buffett and Elon Musk paid little to nothing in income taxes, according to an analysis by ProPublica based on Internal Revenue Service documents.

Prime Minister Justin Trudeau of Canada vowed to fight far-right groups after an attack on a Muslim family in Ontario.

An international tribunal upheld a conviction for genocide, crimes against humanity and war crimes against Ratko Mladic. The Bosnian Serb commander during the Balkan wars was tried for some of the most shocking atrocities in Europe since World War II.

A London police officer pleaded guilty to the rape and kidnapping of Sarah Everard, the British woman whose killing in March touched off a national reckoning over male violence against women.

A spectator slapped President Emmanuel Macron of France across the face on Tuesday during a public event.

Our reporter covering the French Open in Paris wrote about how strange the 9 p.m. curfew feels, when the City of Light slams shut as fast as a window. “We should be having the late matches and then a party,” one spectator lamented.

President Xi Jinping last week instructed Communist Party officials to improve their communications with the rest of the world. Analysts said he was acknowledging that increasingly aggressive diplomacy had not worked.

“We must focus on setting the tone right, be open and confident but also modest and humble, and strive to create a credible, lovable and respectable image of China,” Xi said.

But it’s not as amicable as it sounds: Xi did not signal any change in the policies that have sparked the tension.

“There’s a long tradition of Chinese leaders dispensing guidance for the cadre and the people. Think of Mao Zedong’s sayings collected in the ‘Little Red Book,’” our Beijing bureau chief, Steven Lee Myers, told me.

“Xi Jinping is the first leader since then whose words have been elevated to such an exalted level in the Communist Party pantheon,” Steven said.

Xi’s speeches have been collected in several volumes already and there’s even an app for party officials to study his views. This meeting of the Politburo, the Communist Party’s top governing body, was a “study session,” meant to go over communication of the country’s policies after increasingly negative views of China.

Xi’s plan? A push “to convince the world of the wisdom of the country’s policies that have contributed to those negative perceptions,” Steven told me — “not a sign that he intends to moderate them.”

Make roast fish with sumac for a tangy dinner.

Music and mindfulness have become linked during the coronavirus pandemic. Artists like Erykah Badu, Grimes and Arcade Fire are making contributions on new wellness apps.

Lawrence Wright’s “The Plague Year” chronicles the pandemic in the U.S. Our reviewer called it “a virtuoso feat.”

P.S. Our Tokyo bureau chief, Motoko Rich, spoke with the BBC World Service and NewstalkZB in New Zealand about constraints faced by athletes ahead of the Tokyo Olympics.

The latest episode of “The Daily” is about who is hacking the U.S. economy.