We’re covering Donald Trump’s impeachment trial, the loss of a space for debate after China’s Clubhouse ban and the upbeat mood at the Australian Open. 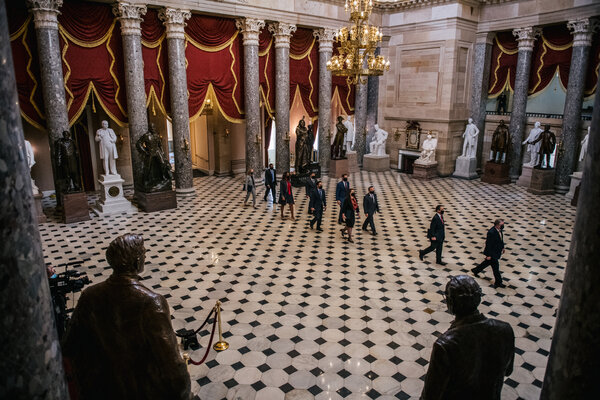 The trial of former President Donald Trump, which opened on Tuesday in the Senate, will test the boundaries of the Constitution after the assault on the Capitol last month by a mob of his supporters.

The first hours of debate focused on whether the trial itself was constitutional given that Mr. Trump had already left office and was now a private citizen living in semi-seclusion in Florida. Here’s the latest.

What’s next: If a simple majority of senators agree to move forward after the debate, as expected, impeachment managers will begin presenting their case on Wednesday. Follow our live analysis here.

To convict: A two-thirds vote would be required in the Senate, meaning that 17 Republicans would have to abandon Mr. Trump, who still holds great sway over their party. That appears unlikely.

Go deeper: Read The Times’s exhaustive investigation into the 77-day campaign by Mr. Trump and his lawyers to subvert the election.

W.H.O. experts share findings on the origins of the coronavirus

A team of World Health Organization scientists said in China on Tuesday that the coronavirus had probably first spread to humans through an animal and was “extremely unlikely” to have been the result of a lab accident.

The findings were delivered after 12 days of fieldwork by the team in Wuhan, China. There are still months of work ahead to trace the virus’s origins.

Dr. Peter Ben Embarek, a food safety scientist who is leading the team, dismissed the idea that the virus might have emerged from a laboratory in Wuhan, a theory that has gained momentum in the U.S. and elsewhere. “It was very unlikely that anything could escape from such a place,” he said, citing safety protocols.

Science and politics: The inquiry is proceeding in a charged political environment. While China cooperated with the visit, the government is still firmly in control of research related to the virus in China and may try to prevent the release of any embarrassing information.

People with dementia are at significantly greater risk of contracting the coronavirus, and are much more likely to be hospitalized and die from it, than people without dementia are, a new study found.

Mexico’s total number of deaths from Covid-19 is now the third-highest worldwide, which puts it ahead of India, a nation that is 10 times more populous. Doctors and officials say part of the reason so many more people are dying now is a nationwide shortage of oxygen tanks.

China blocks Clubhouse, but it has left a mark

The Chinese government blocked the social media app Clubhouse, after it briefly offered mainland residents an outlet to speak their minds and communicate with people in Taiwan, Hong Kong and the diaspora.

Thousands of people had flocked to it to talk about democracy, Taiwan, the repression of Uighur Muslims and other sensitive topics. Many waited in line for hours to speak in the audio chat rooms. The format, where conversations eventually disappear, made some more willing to share personal stories.

Analysis: The conversations helped illuminate why the Chinese government blocks free speech online. “Those free-flowing exchanges threaten to debunk the caricatures that the state-controlled media often foists upon the Chinese people,” writes Li Yuan, a tech columnist for The Times.

Details: The app was created last year by Silicon Valley venture capitalists and quickly took off. An appearance on the app last month by Elon Musk, the tech billionaire who enjoys a cult following in China, led to a surge in Chinese interest.

If you have 5 minutes, this is worth it

The warnings before a Himalayan disaster

Long before floods this week left 26 people dead and 200 missing in the northern Indian state of Uttarakhand, above, scientists had warned that global warming was causing ice from the Himalayas to melt at an alarming rate, increasing the risk of landslides.

But the Indian government overrode the objections of experts and the protests of local residents to build hydroelectric power projects in the volatile area. Our reporters look at the trail of ignored warnings.

Netherlands adoptions: The country temporarily halted all international adoptions after a report found that the government didn’t act on known systemic wrongdoing, including child theft and trafficking, from 1967 to 1997.

Kobe Bryant crash: The pilot in the helicopter crash that killed the retired star basketball player, his daughter and seven other people flew into clouds in violation of federal rules, investigators said.

Mars mission: A robotic probe from the United Arab Emirates began orbiting the red planet to study its atmosphere and weather. On Wednesday, a Chinese spacecraft, Tianwen-1, is also set to enter Mars’s orbit, while a NASA rover is scheduled to arrive next week.

Snapshot: Above, protesters and security forces facing off in Yangon, Myanmar, on Tuesday. Protests against the military coup that deposed Daw Aung San Suu Kyi showed no signs of fizzling, despite a new curfew and a ban on gatherings of five people or more.

What we’re reading: There’s a neighborhood in the suburbs of Nairobi that serves colonial nostalgia to the upper strata of Kenya’s political class. Its name? Karen.

Cook: This pizza margherita is adapted from the recipe used at Roberta’s, a restaurant in Brooklyn.

Read: A moving poem about childbirth, the Virgin Mary and the amazing things that female bodies can do.

It’s easier to stay active with our At Home collection of ideas on what to read, cook, watch and do while staying safe at home.

Karen Crouse, a Sports reporter, is in Melbourne covering the first international sports tournament of 2021. I talked to her about the safety measures at the Australian Open and how the event provides a glimpse of what sports can one day be again. (Here’s what to watch.)

What’s the feeling at the Open and in Melbourne?

People are feeling cautiously optimistic, but there is apprehension that I don’t think anyone in the U.S. could understand. There are health checks for everybody who enters the grounds. You have contact tracing. There are people who are relegated to one of three zones.

In Melbourne, they had a 111-day hard lockdown, where they had a curfew and they couldn’t venture more than three miles from their homes. Only one person could go grocery shopping. Everyone here made individual sacrifices for the collective good.

They really are proud of what they collectively did to subdue the coronavirus. They don’t want a sporting event to be the cause of rolling back all of the gains they’ve made.

Is there anything that’s changing in the way tennis is played?

There are no line judges. They’re trying out an electronic system — this could end up being a technological advancement. Other than that, it’s marvelously normal. It’s almost a relief to see and feel how normal it seems. There were fewer than 20,000 people on the ground, and that’s much less than normal.

What matchups are you looking at?

Serena won her last Grand Slam, her 23rd, here in 2017 while pregnant with her daughter. She has made it two Grand Slam finals since then, but is still looking for her 24th title, which would tie her for the career best with Margaret Court, an Australian. I really like her chances.

On the men’s side, Novak Djokovic has been dominant here — he played an almost flawless opening match. There has been a verbal sparring match between him and Nick Kyrgios. They’ve been exchanging barbs in the press. They’re in the same half of the draw.

That’s it for this briefing. See you next time.

Amelia Nierenberg and Carole Landry helped write this briefing. Theodore Kim and Jahaan Singh provided the break from the news. You can reach the team at [email protected]

P.S.
• We’re listening to “The Daily.” Our latest episode is a guide to the impeachment.
• Here’s our Mini Crossword, and a clue: Swampy wetland (three letters). You can find all our puzzles here.
• Liz Day, a senior editor and producer, appeared on the “Today” show to talk about The Times’s new documentary, “Framing Britney Spears.”