On the floor of the international auto show this fall in Beijing, among the gleaming boldface names and futuristic concepts, was a car that from a distance looked like a 1958 Corvette.

Up close, however, it was clear this was no classic Chevrolet. It was a sporty coupe called the SS Dolphin.

“How can they get away with that?” was one of the more common questions asked at its Route 66-themed, Old West-style (yes, both) unveiling. On Corvette Blogger, a site for enthusiasts, Keith Cornett wrote: “They say that imitation is flattery, so we’ll consider these to be ‘tributes’ to the Corvette as opposed to copycats, even as we find the side view and front end to be absolutely awful when compared to an actual ’58 Corvette.”

Admittedly, the proportions are significantly off — as if the Dolphin’s designer had looked at just a 1958 Corvette photo rather than engineering blueprints. For starters, the Dolphin is 11.8 inches longer and 3.4 inches taller than the original, and it runs on a hybrid gas-electric powerplant, not a proper V-8. With the top down, it looks as if it’s all backward.

The tribute doesn’t have Chevy sweating. “We do not have any plans to take any legal action related to the SS Dolphin,” said Kevin Kelly, a General Motors spokesman, “since they are not using any of our branding, and the design is not identical” to the first-generation Corvette, the so-called C1.

The SS Dolphin’s manufacturer, SongSan Motors, plans to put its fanciful concept car, in eight shades of candy- and ice-cream-inspired colors, into production. SongSan said the base price would be 590,000 renminbi (about $89,000). Hagerty’s Value Guide pegs the price of an actual ’58 Vette — $3,591 when new, or over $32,000 after adjusting for inflation — at as much as $82,000, in top condition.

If the Dolphin went on sale in the United States, the final tally might nearly double to more than $160,000 with taxes, fees and tariffs, but any such plans remain nebulous. SongSan, known previously for its farm tractors, big rigs and knockoffs of Toyota’s Hi-Lux mini-pickup, has no known U.S. sales outlet. 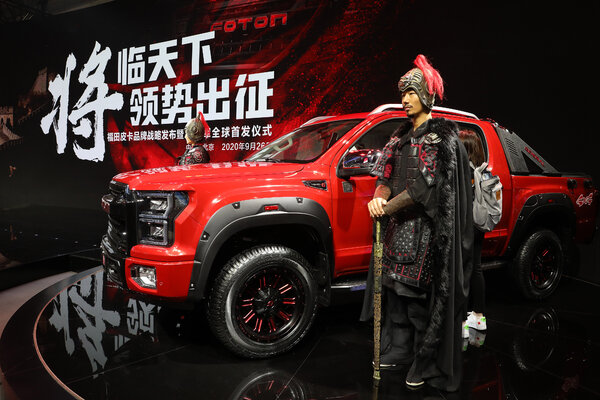 The Dolphin was hardly the only controversially styled model shown in Beijing. There was also Foton’s G9, or “Big General,” which is a dead ringer for a Ford F-150 pickup — albeit the scaled-down size of a Ford Ranger. Hongqi’s E-HS9 is a Lincoln S.U.V. look-alike; the Ora GT is an unmistakable Mini Cooper first cousin, with some stray style DNA from the Volkswagen Golf GTi and Hyundai Veloster.

What is going on with this apparent battle of the clones?

It’s complicated. In the world of Chinese automakers, anything notable produced by rival automakers is fair game to copy. Yes, it is a form of compliment. But not all of those automakers are as tolerant as, say, Chevrolet or Ford.

The practice can probably be traced back to 2007 when Shuanghuan unveiled its CEO at the Frankfurt Motor Show.

“It’s an exact copy of our X5,” Chris Bangle, BMW’s lead designer, said at the time. He called for BMW to sue, which it did, but its victory in a German court was not exactly satisfying. While the front fascia of the CEO had to be redesigned before it could be sold in Germany, Shuanghuan’s dealers still offered the original BMW-like front fascia parts as accessories.

To press its case beyond Germany, BMW found it would have to sue in just about every other country in which Shuanghuan planned to sell the CEO. This legal mess would have dragged on for years — most likely past the CEO’s expected life span — and cost millions in litigation fees. After BMW lost a similar case in Italy, it dropped the matter.

Though clones in form, many of these Chinese efforts are far less so in function. The CEO was critically derided as “the world’s worst S.U.V.” A writer for a German magazine took one on a test drive and then set it ablaze, giving it, he wrote, “the fiery death it deserved.”

Sales figures for the CEO are not available, but it is widely believed it was a flop. Shuanghuan was also involved in litigation over its copies of the Smart Fortwo and Honda CR-V. In 2016, the Chinese government shut down Shuanghuan for unspecified “deficiencies.”

In recent years, Jaguar Land Rover became incensed over a Chinese automaker’s attempt to produce something called the LandWind X7. JLR deemed it a straight knockoff of the Range Rover Evoque concept, which was headed for production. That’s where JLR drew the line.

The Evoque designer Gerry McGovern said that the concept featured proprietary “future technology” and that the LandWind X7’s manufacturer, Jiangling Motors, was creating “customer confusion” by bringing a production version to market before JLR could build the Evoque.

JLR sued — in China. This was a rare step because outsiders seldom seem to prevail in Chinese courts. Also, suits by large multinational corporations against domestic Chinese firms often come across as bullying, so there can be a cost in public perception.

There is one other consideration: To do business in China, foreign automakers must have a “joint venture partnership” with a Chinese manufacturer. Because of these often complex relationships, most automakers decide it is less troublesome, and makes fewer enemies, to merely turn the other cheek.

“You do have to ask yourself, ‘Are they really stealing anything we care about?’” Mr. McGovern said. “If they were copying something from an old model of ours, maybe not. But in the instance of the Evoque concept — something that had yet to come to market — the answer was yes.”

Surprisingly, after a drawn-out legal battle, JLR won last year. In fact, the judge further ruled that Jiangling had to stop manufacturing, marketing and sales of the LandWind X7, and compensate Land Rover for any models that had been sold already.

Jiangling appealed to China’s equivalent of the Supreme Court, but Land Rover prevailed there, too; the court also invalidated patents Jiangling had filed in China for the LandWind.

It was a landmark, complete victory. Yet Jiangling ended up getting away with selling a significant number of Land Winds in China.

And if Chinese automakers were expected to learn some lesson here, models such as the SS Dolphin, Big General and Ora GT at this fall’s Beijing auto show were an indication that it’s still going to be business as usual.