The president kicked off a week of events to promote his $1.9 trillion American Rescue Plan by appointing Gene Sperling, a longtime Democratic aide, to oversee spending under the bill. 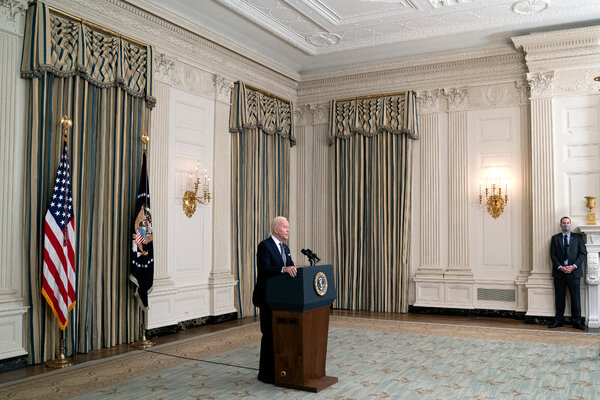 By Jim Tankersley and Alan Rappeport

WASHINGTON — President Biden said on Monday that his administration was on pace to achieve two key goals by March 25: 100 million shots of Covid-19 vaccines since his inauguration and 100 million direct payments under his economic relief bill.

The announcement was the first in what promises to be a series of end-zone dances that Mr. Biden and administration officials are set to stage this week as they promote the $1.9 trillion package that the president signed into law last week.

“Shots in arms and money in pockets. That’s important,” Mr. Biden said in a brief address from the White House. “The American Rescue Plan is already doing what it was designed to do: make a difference in people’s everyday lives.”

Over the weekend, the Treasury Department began issuing direct electronic payments of $1,400 per person, as authorized by the law, to low- and middle-income Americans. The United States has administered 92.6 million vaccine doses since Jan. 20, when Mr. Biden took office, according to data released on Monday by the Centers for Disease Control and Prevention. At the current pace of vaccinations, the country will pass 100 million doses before the end of the week, well ahead of the president’s promise of March 25.

Mr. Biden had set the goal of 100 million doses before taking office, and he has repeatedly heralded the country being on pace to meet it, though many public health experts say it is relatively easily attainable.

The relief plan also includes dozens of other provisions that have yet to be carried out, such as new monthly checks for parents, $350 billion for state and local governments and additional relief for the unemployed.