The blueberry is a fruit synonymous with the US, but farmers of the wild crop are struggling.

David Yarborough is unequivocal about this summer’s wild blueberry harvest in Maine. “It has been terrible,” he says.

Prof Yarborough, an expert in the berries at the University of Maine’s horticulture department, spent 28 years advising and helping farmers in the US’s far north eastern state.

He says that the 2020 crop, which has been picked over the past month, will be limited. “It is to do with the weather. We had a series of frosts at the beginning of June, and then significant drought for the whole of the summer.

“So we have much less fruit, and the berries are much smaller. It is a disaster.” 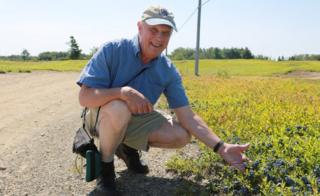 If this wasn’t bad enough for Maine’s 500 or so wild blueberry farms, it comes against a backdrop of being caught up in President Trump’s trade wars with China, a global glut of blueberries – and the impact of coronavirus.

There are, in simple terms, two types of blueberry plants – the wild and the cultivated.

The wild is native to the north eastern states of the US, particularly Maine, and over the border in Canada.

It cannot be planted commercially. Instead, farmers tend and harvest it where it is found naturally. For this reason, plus the fact it needs cold winters, it has not expanded out of its home region. Most production is in Maine, with a small amount in neighbouring New Hampshire and Massachusetts.

By contrast, cultivated blueberry varieties can easily be planted on a large scale. They are also far more tolerant of warm weather and produce much higher yields of far bigger berries. So they are now increasingly planted across the US and around the world, in countries such as Peru.

In comparison, the total amount of cultivated US blueberries, led by Washington state and Oregon, totalled 673 million lb in 2019. And Peru produced 180 million lb in 2018, after an almost eight-fold increase since 2015.

So what’s wrong with buying the cultivated blueberries? Well, according to advocates and fans of the wild ones, there is no comparison.

Wild blueberries are said to have a much more intense flavour, and because of this can be up to 60% more expensive.

“Wild blueberries are different in every way, and we have to let the world know that,” says Marie Emerson, a farmer from Columbia Falls in Maine, 40 miles from the Canadian border.

To help promote and support the state’s wild blueberry growers, Ms Emerson is now a member of the public advocacy body Wild Blueberry Commission of Maine.

For the past five years, Maine’s growers had begun to export frozen wild berries to China, as reported by US broadcaster NBC last year. This was a very useful new market, as growers had been struggling to sell all their crop due to the cheaper cultivated berries in a saturated US market.

However, sales to China basically halted in April 2018 when Beijing imposed 80% tariffs on US frozen blueberries in response to President Trump’s levies on Chinese imports.

Ms Emerson now wants efforts to be refocused on increasing market share in the US itself, with a campaign to make consumers aware of the superiority of wild blueberries over the cultivated varieties.

In August the wild blueberries are available to buy fresh in the US, but for the remainder of the year they are sold frozen.

However, some of Maine’s smaller blueberry farmers have already closed down or vastly scaled back.

“It’s hard for us, because we don’t have the deep pockets [of the few bigger producers in the state],” says Greg Bridges, a third-generation blueberry farmer in Baring, Maine.

“Unless you’re doing things on such a big scale and get a big return, you’re just trying to hold on to assets until there’s going to be a better time.”

Ms Emerson agrees it is the smaller producers who are most at risk, and says she is fighting for them on the commission.

While Maine used to rely on thousands of migrant workers or “hand crews” to pick the wild blueberry fields, which are known as “barrens”, Prof Yarborough says the numbers have fallen below 1,000 due to increased mechanical picking.

“The hand crews are migrant workers from Florida and New Jersey, who typically come from a Mexican or other central American background, while the picking machines are also operated by migrant workers, as the drivers come across the border from Canada,” he says.

This season there have been a number of reports of pickers coming down with Covid-19, but Prof Yarborough adds that all workers are tested every day, and those testing positive are quickly isolated. “They are quarantined in local hotels, and fed and paid.”

However, Mr Bridges says that the coronavirus outbreaks have “caused chaos”. “The couple of confirmed cases ripped through the industry – it was impossible for us to find workers.”

Looking ahead, Prof Yarborough thinks there will be more tough times for Maine’s wild blueberry farmers as they battle against the continuing “huge increase” in cultivated blueberries on sale.

More from the BBC’s series taking an international perspective on trade:

He agrees that Maine needs to make more people aware of the superiority of its fruit.

“Certainly in the short term there’s a lot of pain, a lot of people going out of business,” says Prof Yarborough, who in total has worked in the industry for 40 years.

“Those that can produce more efficiently will stay. It is an uphill battle to educate people on the differences [between wild and cultivated].”