Several of the reactor’s more than 60,000 fuel rods have been damaged, prompting regulators to reassess the levels of radioactive gases around them. 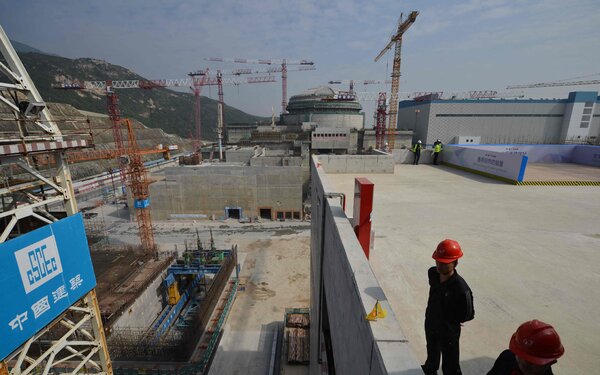 SHANGHAI — The Chinese government said on Wednesday that “about five” of the uranium fuel rods inside a nuclear power plant in southeastern China had been damaged, but added that no radiation had leaked out of reactors at the site.

Regulators have also reviewed and approved limits on how much radioactive gas is allowed to accumulate in the water at the reactor, China’s National Nuclear Safety Administration said in a statement. Nuclear scientists in the United States and Europe said in interviews earlier this week that a buildup of radioactive gas in the water and steam surrounding the fuel rods, while not uncommon at reactors elsewhere, is often a sign of poor design, manufacturing or management.

The Taishan Nuclear Power Plant is on the southeastern coast of China, about 80 miles southwest of Hong Kong. The power plant’s Reactor One, which has encountered difficulties in recent days, has more than 60,000 fuel rods.

The reactor is designed to operate safely despite damage to up to 0.25 percent of the fuel rods, the safety agency said. That would be at least 150 fuel rods.

Najmedin Meshkati, an engineering professor specializing in nuclear safety at the University of Southern California, said that it is fairly common for a few fuel rods to suffer damage in a nuclear reactor. But it is less common for radioactive gases to accumulate in the water and steam around the fuel rods to the point that regulators need to review what levels are safe, he said.

“There is no question that something has happened,” he said, while adding that events inside the reactor are unlikely to pose a serious safety threat.

The two nuclear reactors at Taishan use a new design developed in France. Two large French companies involved in the construction and operation of the reactors, Framatome and EDF, publicly acknowledged on Monday that difficulties had occurred in the operation of Reactor One at the site.

Fuel rods in nuclear reactors in the West also occasionally leak traces of radioactive gases into the water and steam that surrounds them. Leaks can occur when the exterior cladding of the rods is damaged by the bristles from brushes used during maintenance or other contaminants.

But China’s safety regulator, which is part of the Ministry of Ecology and the Environment, said that no leak into the environment had occurred. “At present, monitoring results of the radiation environment around the Taishan Nuclear Power Plant show that there is no abnormality in the radiation level around the nuclear power plant,” the statement said.

While the fuel rods have leaked a little into the surrounding water and steam, the water system itself is not leaking, the safety agency said. And even if the water system were to leak, the whole reactor is inside a very thick concrete dome that has not been breached, the agency added.