Cabinet ministers have “set back recovery plans” for the aviation industry by making pessimistic comments about Britons travelling abroad in 2020, the boss of British Airways’ parent company has told MPs critical of the company’s proposed jobs cull.

Sky News has seen an email sent by International Airlines Group chief executive Willie Walsh in which he remains defiant about its plans to make up to 12,000 BA staff redundant in response to the coronavirus crisis.

In his email to MPs – sent a week after he made a typically robust appearance before the transport select committee – Mr Walsh expressed renewed disappointment that trade unions had shunned engagement with the company during the consultation process. 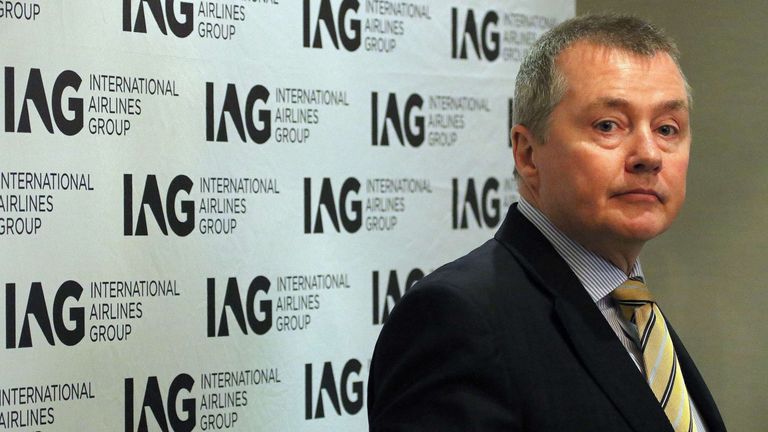 IAG has been accused by unions of embarking on a sacking of BA’s entire workforce, with the majority to be re-employed on inferior terms.

“We are now 28 days into the consultations and to date, regrettably, Unite and GMB have decided not to represent their members, preferring to engage in what Unite calls ‘crisis leverage’ in an effort to intimidate BA,” Mr Walsh wrote.

“This has not, and most definitely will not, work.

“Time is not on our side so we will not pause or defer our consultations.”

The IAG chief also blamed several members of the cabinet for the urgency of its workforce restructuring.

He wrote that the prime minister’s decision to impose a 14-day quarantine on passengers travelling to the UK, health secretary Matt Hancock’s dismissal of “big, lavish international holidays”, and Transport Secretary Grant Shapps’ remark about the riskiness of booking a summer break “have all seriously set back recovery plans for our industry”.

Mr Walsh reiterated his belief that passenger demand may not recover to 2019 levels until 2024, adding that IAG was continuing to explore “all other avenues to support our liquidity”.

Next week from Monday to Thursday, Dermot Murnaghan will be hosting After the Pandemic: Our New World – a series of special live programmes about what our world will be like once the pandemic is over.