Home » Business » Did You Miss Out on Vacation This Year? You’re Not Alone

In a typical year, New York employees of the magazine publisher Condé Nast must use their vacation days before late December or lose them — a common policy across corporate America.

But early this month, the company sent employees an email saying they could carry up to five vacation days into next year, an apparent acknowledgment that many scrimped on days off amid the long hours and travel restrictions imposed by the pandemic. “The carry-over will be automatic, and there is nothing further you need to do,” the email said.

Condé Nast was not alone in scrambling to make end-of-year arrangements for vacation-deprived workers. Some employers, however, have been less accommodating.

“It’s a big issue we’re seeing now — competing requests for time off over the next two weeks,” said Allan S. Bloom, an employment lawyer at Proskauer in New York. “Clients are struggling to figure it out.”

Mr. Bloom and other lawyers and human resources experts said there was no clear pattern in how employers were handling the challenge.

The same is true for some companies that pay workers for their unused vacation days.

Neither General Motors nor Ford Motor, whose hourly workers can cash out unused vacation days at the end of the year, is making changes this year.

But many workers may find themselves unable to take vacations that they postponed: Salaried workers at both automakers ordinarily lose unused vacation days at the end of the year without compensation.

Other companies have taken steps that could defuse a potential human resources headache and, they say, benefit their work forces in difficult times.

Bank of America, which normally requires its U.S. employees to take all their vacation before the end of the year, said in June that it would allow them to push up to five days into the first quarter of 2021.

Citigroup has typically allowed its U.S. employees to carry vacation days into the first quarter of the next year, but in July it added an inducement: Employees receive an extra vacation day next year if they use all of their 2020 vacation time this year.

Smaller companies have made similar modifications.

Latshaw Drilling, an oil service company based in Tulsa, Okla., typically allows office workers to roll over up to three weeks of vacation time. In December, Latshaw told its office employees that it would buy up to one week of unused time beyond that amount, which they would have otherwise lost.

“Since this year was so crazy and people were afraid to travel, we made a one-time change,” said Trent Latshaw, the company’s founder and president.

Several experts said a philosophical question loomed over vacation benefits: Is the point to ensure that workers take time off? Or are vacation days simply an alternative form of compensation that workers can use as they see fit, whether to relax away from the job, to supplement their income or to drag around with them until the end of time, as a monument to their productivity?

An employer’s policies can reflect its views on this question: For all their drawbacks, use-it-or-lose-it rules can help ensure that workers take time off, said Jackie Reinberg, who heads the absence and disability practice of the consulting firm Willis Towers Watson. By contrast, rollover and cash-out options imply that vacation is an asset they are entitled to control. 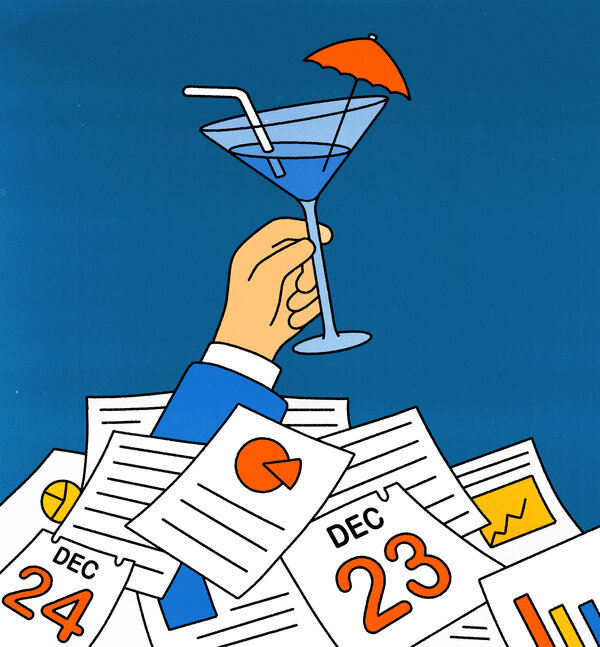 Still, for many workers, the issue during the pandemic is not unused vacation days so much as insufficient vacation days. Jonathan Williams, communications director for United Food and Commercial Workers Local 400, which represents grocery store workers in Mid-Atlantic States, said workers had sometimes been forced to draw down their reserves of paid time off if they were asked to quarantine a second time after a possible coronavirus exposure. Only the first quarantine is typically covered by the employer, Mr. Williams said.

And some employees have difficulty taking advantage of the generous vacation policies their companies offer.

A Target spokeswoman said the company had increased the vacation days that both hourly and salaried workers could roll over into the next year, based on the employee’s role and tenure. But according to Adam Ryan, who works for Target in Christiansburg, Va., many employees struggle to qualify for benefits like vacation days.

Mr. Ryan said in a text message that he had been with the company for three years but typically averaged less than 20 hours a week. “That way I don’t get any vacation or paid sick days, no real benefits of any kind,” he said.

The Target spokeswoman said employees could pick up more hours under its holiday staffing arrangement.

Several union officials, employers and human-resources experts said financial considerations drove many decisions about vacation policies during the pandemic. Toyota normally allows hourly and many salaried employees in the United States to cash out up to two weeks of unused vacation days. This year, the company lowered the cap to one week, a change that a spokeswoman said was intended to help avert layoffs.

The considerations become even more complicated for days that workers push into future years. According to Ms. Reinberg, allowing workers to roll over days can create a pile of liabilities owed to workers that many employers are loath to carry on their books.

A union official at the news organization Reuters said the company cited accounting concerns in sticking with its use-it-or-lose-it policy this year. The union had pleaded for leniency, noting that its contract allows management to approve a rollover of vacation days in “exceptional circumstances.”

“If this year has not been exceptional, I don’t know what the hell has been,” said the union official, Dan Grebler, an editor who is chair of the workers’ bargaining unit at Reuters. “The response was: ‘No, we can’t do that. There would be complicated bookkeeping involved.’”

Mr. Grebler said Reuters had begun urging workers to take days off this calendar year around the same time it had rebuffed him.

A Reuters spokeswoman said that “our policy for U.S. employees for some years has not allowed for unused vacation days to be rolled over” and that “employees have been regularly reminded since the first half of this year.”

Unionized employees at The New York Times, such as reporters, are encouraged to use vacation days during the year in which they accrue the days but can generally carry them over until March 1 of the next year. Days they do not use by that point are paid out in cash. A company spokeswoman said the policy had not changed this year.

By both law and custom, many Americans have come to see vacation days more as compensation than as a mandate to take time off.

In a survey by Willis Towers Watson in April, more than half of employers that made or planned to make changes to their vacation benefits said they were doing so because they didn’t expect workers to use all their days. About one-third that planned changes said the benefit had become too costly.

A few states, like California and Montana, essentially codify the property-right view of vacation by outlawing use-it-or-lose-it policies. (Companies with use-it-or-lose-it or strict rollover policies must exempt workers in those states.)

Such laws protect workers from effectively being deprived of vacation days that are difficult to use during the year only to have them expire at year’s end. But these laws may also subtly discourage vacations by making them easier to redeem for money or put off indefinitely.

“To me as an advocate, you should be able by law to keep unused vacation time,” said Peter Romer-Friedman, an employment lawyer at Gupta Wessler. “But I’m not sure that creates a good incentive.”

To that end, a number of companies, many in the tech industry, have seized on the pandemic as an opportunity to make sure their workers are decompressing.

In the spring, the software company GitLab responded to a significant rise in hours put in by its more than 1,000 workers with so-called friends-and-family days, in which the company shuts down to discourage people from logging in. Google, Slack and the software company Cloudera have started similar policies — none of which count against workers’ paid days off.

Automattic, the maker of the website-building tool WordPress.com, has gone even further, encouraging employees who work together to coordinate their vacations as a way to eliminate friction that discourages breaks.

“We’ve been experimenting with entire teams taking time off simultaneously,” Lori McLeese, the company’s head of human resources, wrote in an email. “We’re hoping that this may reduce the amount of ‘catch up’ work employees typically return to after taking a vacation, making their transition back less stressful or overwhelming.”