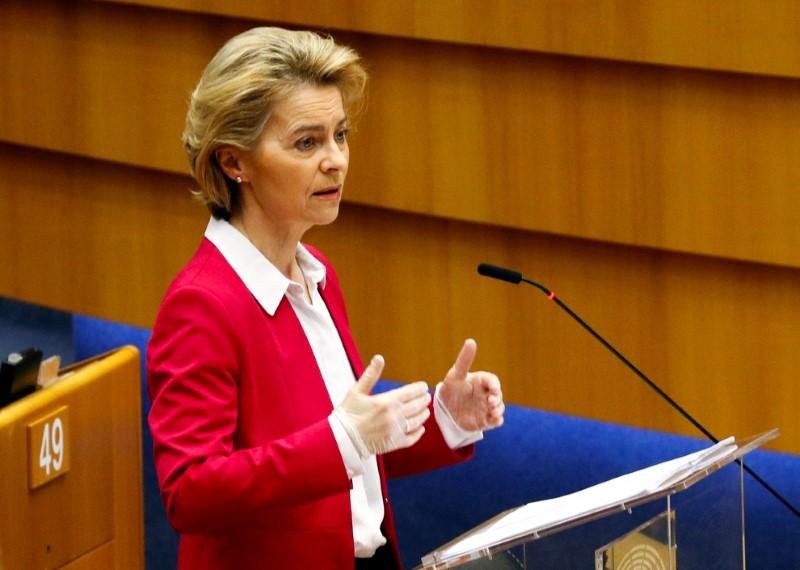 BRUSSELS (Reuters) – European Union lawmakers are expected on Thursday to approve emergency funds to cushion the bloc’s economic slump triggered by the coronavirus pandemic and shore up hard-hit airlines by preserving their landing slots.

It will be the European Parliament’s first ever remote vote following the suspension of sessions at headquarters due to the risk of coronavirus transmission. Only a handful of lawmakers gathered in a Brussels plenary chamber with the rest of more than 700 MEPs scattered under lockdown across Europe.

“From one day to the next, our lifestyles changed. Our streets emptied. Our doors closed. And we moved from a daily routine to the fight of our lives,” the head of the EU executive, Ursula von der Leyen, told the gathering.

Wearing white, latex protective gloves, she called on the chamber to vote into law a special 37-billion-euro ($40.59 billion) fund to allow the 27 member states to spend more to prop up their economies.

The legislation, to be voted on in the evening, will also allow an existing natural disaster fund to support strained public health services across the EU.

The assembly is also due to green-light the suspension of a rule requiring airlines to run most of their scheduled services or else forfeit their landing slots – a move to give carriers some breathing space during the coronavirus pandemic.

After holding two test votes earlier in the week, members of the EU legislative arm will print their ballots at home, scan or photograph their signed vote and send it from their official email address for counting.

“Democracy cannot be stopped by this virus,” David Sassoli, the Italian president of the European Parliament.