The Biden administration is also expected to name Rohit Chopra as the head of the Consumer Financial Protection Bureau, in moves that would bring Obama-era regulators to oversee key financial agencies. 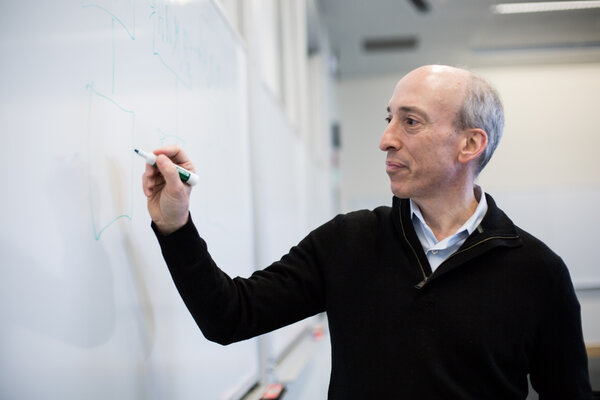 The Biden administration is tapping two financial regulators from the Obama administration to oversee key departments that had loosened their grip of the industry under President Trump, according to two people with knowledge of the plans.

Gary Gensler, who led the Commodity Futures Trading Commission during the Obama administration from 2009 to 2014, will be President-elect Joseph R. Biden Jr.’s nominee to lead the Securities and Exchange Commission, these people said. Also, Rohit Chopra, the former assistant director of the Consumer Financial Protection Bureau, has been chosen to run that agency.

Mr. Gensler is a veteran regulator who played a central role in bringing the big banks to heel in the aftermath of the 2008 financial crisis, giving new teeth to a watchdog agency. Lately, as an academic, he has been schooling himself on digital currencies like Bitcoin that have become an important part of the S.E.C.’s regulatory mandate. He had been leading the transition team advising Mr. Biden on financial regulatory oversight.

Mr. Gensler, 63, will step into an agency that has faced criticism as being too lenient in pursuing high-profile cases involving Wall Street and corporate America.

“I think he comes in with more of a well developed enforcement philosophy given the work he did at the C.F.T.C., and just probably a bit more of an aggressive enforcement bent than the prior chair,” said Matt Solomon, the former chief litigation counsel at the S.E.C. and a partner at the law firm Cleary Gottlieb.

The agency that Mr. Chopra will take over has been defanged under Mr. Trump. Created as a brainchild of Senator Elizabeth Warren as part of the Dodd-Frank financial overhaul law, the consumer bureau was made largely ineffectual after Mr. Trump appointed Mick Mulvaney to run it as interim chair. He pledged to run the agency with “humility and prudence” and requested no funding from the Federal Reserve. Kathy Kraninger, who took over as director of the agency in 2018, has been lambasted by Democrats for undermining the bureau, which they have accused of denying consumers of “millions of dollars in relief.” Democrats have been pressuring Ms. Kraninger to resign or face being fired.